A new listing on the Geekbench database has now seemingly confirmed some of the key hardware specs of the upcoming Samsung Galaxy J3 (2017). The device had been spotted on the website of China’s electronics certification agency, TENAA, as far back as in May. That listing gave us our initial look at the spec sheet of the upcoming smartphone. The device is expected to be an upgrade over the last-generation Galaxy J3, which was released earlier this year by the South Korean consumer electronics giant. The upcoming smartphone has already been rumored a number of times over the past few months, and thanks to an earlier listing on Zauba, we also know that several units have been imported into India for testing purposes. All of which leads us to believe that it won’t be too long before Samsung makes it official.

While the TENAA listing had already revealed some of the key hardware specs, the latest Geekbench listing seems to confirm some of them. As per Geekbench, the upcoming smartphone will come with model number SM-J327P and will be powered by the Qualcomm MSM 8937 (Snapdragon 430) chip that comes with an integrated quad-core CPU clocked at a frequency of 1.4GHz. While the latest listing doesn’t give away too much more, it does suggest that the device will come with just 1355MB of RAM. Whether that translates to a full 2GB of RAM or just 1.5GB remains to be seen. The smartphone will also run Android 6.0.1 Marshmallow out of the box.

As mentioned already, the Geekbench listing does not reveal a whole lot more, but the earlier TENAA listing had revealed some more key details about the upcoming smartphone. As per TENAA, the Galaxy J3 (2017) will come in at least two different variants; one with model number SM-J3110 and another with model number SM-J3119. Both will apparently have 5-inch AMOLED displays, but while the former will feature a 720p panel, the latter is expected to come with a 1080p screen. The two models listed on TENAA sport otherwise identical hardware, including a 2,600mAh battery, an 8-megapixel rear-facing primary camera and a 5-megapixel front-facing selfie-cam. There’s no word on when Samsung will make the Galaxy J3 (2017) official, but the unveiling isn’t probably a long way away. 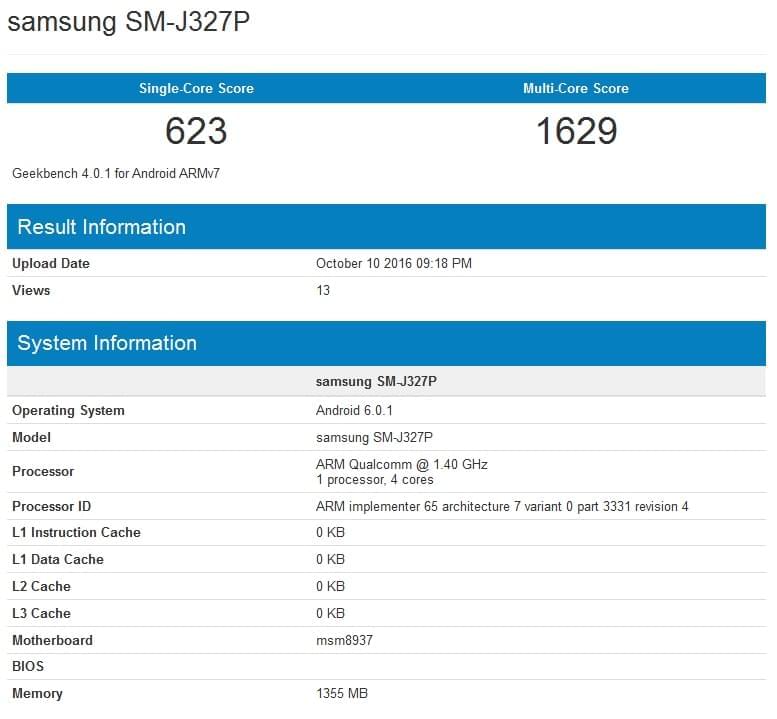