According to the latest data from Strategy Analytics, Samsung maintains its position as the leading smartphone manufacturer based on units shipped. This is in spite of the Galaxy Note 7 having been the subject of a full and unconditional recall. An aspect which greatly hurt the brand and its Q3 financial results. According to the numbers, Samsung managed to Shift 75.3 million units during the third quarter of 2016. While impressive (considering the Galaxy Note 7 absence), the impact of the Note 7 was felt as this represented a declined compared to the same quarter in 2015. Back then, Samsung released a market share of 23.7-percent and based on the current numbers, that market share now stands at 20.1-percent.

Luckily for Samsung though, Strategy Analytics notes that Apple also saw a decline year-over-year with their total number of units shipped in Q3 coming in at 45.5-million (down from 48-million in Q3 2015), which represented a decline from 13.6-percent market share down to 12.1-percent. One of the positive movers was Huawei as their Q3 shipments proved to be one of the big winners of Q3. Compared to Q3 of last year, Huawei had shipped 26.7 million units (a 7.5-percent market share) which increased this year to 33.6 million units (a 9-percent market share). Which further cements Huawei’s position as the third place ranked smartphone manufacturer overall.

That said, OPPO and Vivo (who ranked fourth and fifth respectively) also had a pretty good quarter. OPPO saw their quarter units shipped total rise from 9 million in Q3 2015 to 21.6 million for Q3 2016. A market share increase from 2.5-percent up to 5.8-percent. Which essentially means they were the biggest market share increase of the quarter. Likewise, Vivo saw their units shipped total rise from 9.8 million up to 18.3 million. A number which although was an increase, saw Vivo drop below OPPO in market share with 4.9-percent, compared to 2.8-percent for the same quarter last year.

Either way, in spite of the results showing mixed results for the likes of Huawei, OPPO and Vivo compared to Samsung and Apple, the overall sentiment from Strategy Analytics is that the global smartphone market grew overall year-on-year by 6-percent. Strategy Analytics note that in the third quarter of 2016, a total of 375.4 million smartphones were shipped, which is in contrast to the 354.2 million total attributed for Q3 of 2015. 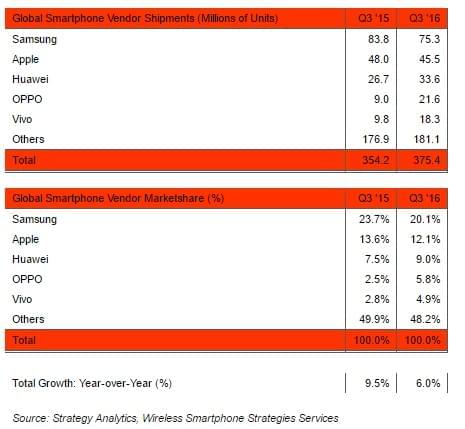