Do we have a good one for you today – the new LG V20 goes up against the new Google Pixel XL. The aircraft-grade aluminum LG V20 takes on the polished glass and metal Google Pixel XL. Both devices are sporting the most current specifications and electronics. QHD displays, fastest memory, and great cameras. The pricing is about the same, which means it’s higher for a Pixel (Nexus) device that most people are used to seeing. The LG V20 is geared toward the photography crowd and those that enjoy a great musical sound over their earphones. The Google Pixel XL is going after those users that want the pure Android experience and top specifications. Let’s see just what these two smartphones have in common and just how much they differ.

The LG V20 and the Google Pixel XL do have a few things in common. The first would be physical size – the LG V20 is overall slightly larger and weighs 6 grams more. Their displays are very close, with the V20 using a 5.7-inch display and the Pixel XL using a 5.5-inch display. Both displays use the QHD resolution, but they use a different technology. They both use a version of the Snapdragon 820 processor, although the Pixel XL is using the newer 821 model that offers 10-percent faster speed. Both use the same Adreno 530 GPU for any graphics you can throw its way. They both are packing 4GB of DDR4 RAM and have a 32GB variant – the V20 offers 64GB and expandable memory while the Pixel XL also offers 128GB model and no means to expand. Both devices offer an excellent camera area, in fact, DxOMark listed the Pixel XL camera as the best smartphone camera they have tested. They each have a fingerprint sensor to unlock the device as well as to authorize mobile payments. They both have the usual suspects – WiFi, Bluetooth v4.2, GPS, NFC, and a Type-C reversible port for charging and data transfer. They also are both running Android 7.0 Nougat.

Please take a look at the detailed Specifications Comparison chart below and here you will see just how these two great devices stack up against one another – click on the “View Full Comparison” link at the end of the chart to expand the details. After that, we will look at each device in greater depth and point out some of its pros and cons. From all of this information, we will try to determine the winner based on specs and execution of design and functions.

When LG switched from the heavier stainless steel to the lighter aircraft grade aluminum on the LG V20, it gave it a much smoother and more refined look. Many users liked the original chiseled edges of the LG V10 as it gave it a more macho kind of look. LG removed the silicone coated back and replaced it with silicone ‘bumpers’ at the top and bottom of the LG V20. The V20 still uses a dual display – a 5.7-inch primary display and smaller secondary display over the top, although it is much brighter this time around. The LG V20 is looking for those individuals that are interested in experimenting with photos or that want a device with a great sound through earphones.

Rather than use an ‘always-on’ display, LG decided to use two displays – a primary IPS Quantum QHD display that measures 5.7-inches with a resolution of 2560 x 1440 pixels and 513 PPI as well as a secondary display that is a 1040 x 160-pixel display that is also 513 PPI. The secondary display will help save the battery by allowing the primary display to stay off while the smaller display stays on and feeds your notifications. This year LG seriously brightened the secondary display making it easier to read the notifications. The LG V20 uses a 64-bit Qualcomm Snapdragon 820 quad-core processor with dual cores running at 1.6GHz and dual cores running at 2.15GHz. The LG V20 packs 4GB of DDR4 RAM and 64GB of faster UFS 2.0 internal storage with room to expand.

The LG V20 uses a dual camera arrangement with a primary 16MP sensor from the LG G5 and another 8MP wide-angle lens that operates independently from the main camera. It can be used for those scenic shots or group family shots when you would like a wider shot. LG included laser and phase detection autofocus (PDAF,) added a large f/1.8 aperture on the main camera and f/2.4 for the 8MP sensor, OIS, and a dual-tone LED flash. For the FFC, LG decided to go back to a single 5MP FFC with a f/1.9 aperture for selfies or video chatting. The LG V20 packs a 3200mAh removable battery that should last you throughout the day. Quick Charge 3.0 makes for a fast charge, or you can just replace it with a new battery.

The LG V20 went all out on sound with four DACs (Digital-to-Analog Convertors), which is a first in a smartphone. LG then provided an excellent EQ with left/right balance controls that are B&O Play certified. The only thing they forgot to do is to add dual front-facing speakers to blow us away with their sound so you will be earphone bound. The LG V20 was given the MIL-STD-810G certification because of its rugged build. The V20 measures 159.7 x 78.1 x 7.6mm and weighs in at 174 grams and cost should be around $800. The LG V20 is available in the colors Titan, Silver, and Pink. Last, but certainly not least, the LG V20 will be running Android 7.0 Nougat out-of-the-box. 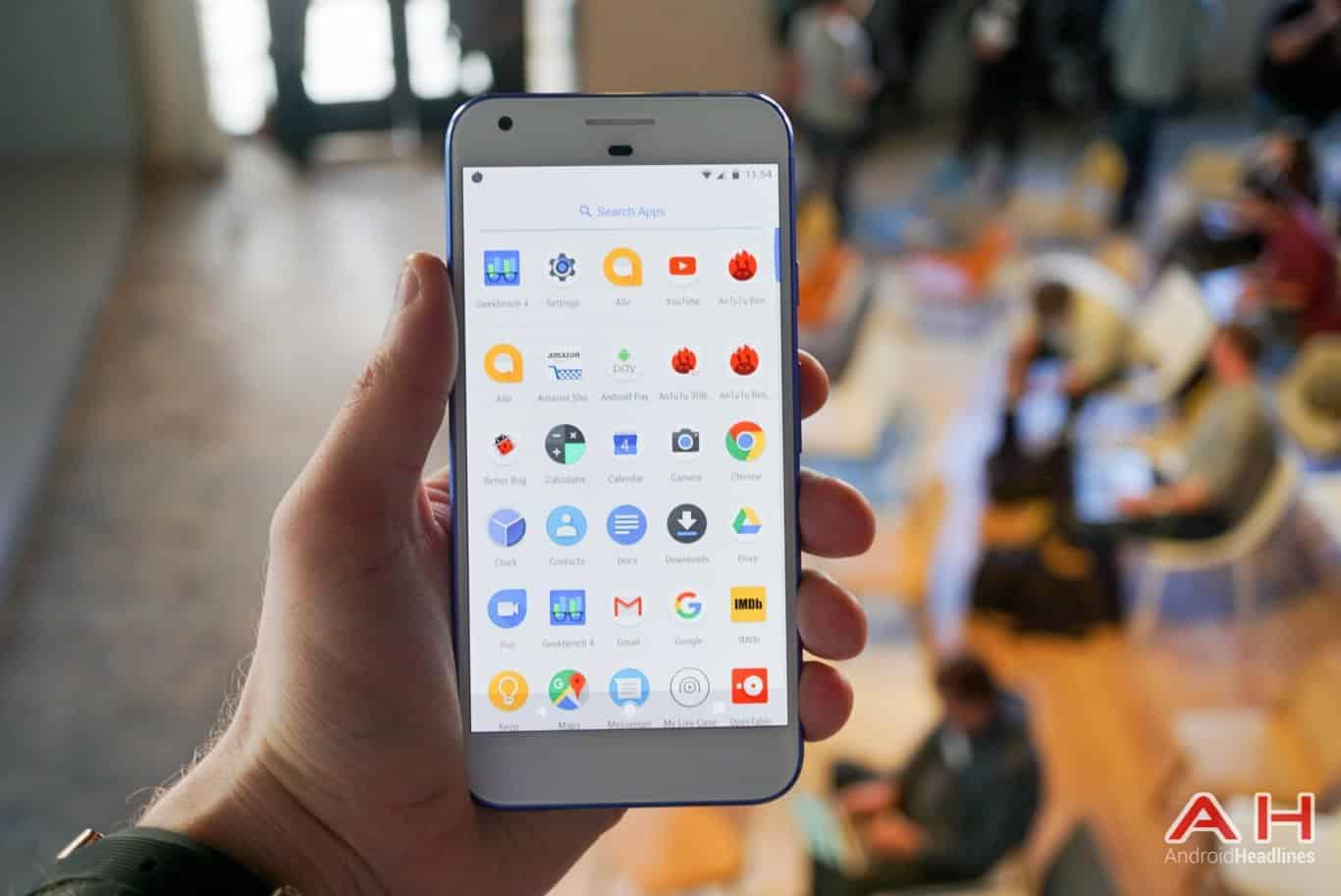 Google has turned their Nexus into a Pixel and it’s causing quite a stir among the media and former Nexus users. Has Google finally made up its mind to go down this new path or will things change in a couple of years? There is not too much differentiation between the two models – mostly just in the size and resolution of the display. We will be looking at the Google Pixel XL because 5.5-inches is a better display size. Let’s see how this newly design Pixel XL with its polished glass and metal construction holds up to the new LG V20’s all-metal construction and the specifications that it brings to the table.

The Google Pixel XL is sporting a 5.5-inch AMOLED display with a Quad HD resolution of 2560 x 1440 pixels and a robust 531 PPI. It is using the newest Qualcomm 821 quad-core processor with a dual-core clocked at 1.6GHZ and a dual-core clocked at 2.15GHz. It packs 4GB of DDR4 RAM and 32GB or 128GB of fast UFS memory with no means to expand. It uses a large 3450mAh non-removable battery for power and has rapid charge capabilities.

Google cranked up the camera area on its Pixel models. When you first look at the specifications, they do not seem that impressive – a 12.3MP sensor for their main camera along with an aperture of f/2.0, phase detection autofocus (PDAF,) a dual-tone LED flash, and no OIS. The sensor is 1/2.3-inches, and it uses a 1.55µm pixel size. Now the 8MP front-facing camera (FFC) is large and comes with a f/2.0 aperture, a 1.4µm pixel size, and 1080p. This setup should offer excellent selfies and video chatting. Even with these specs, the Pixel camera was already tested by DxOMark and received a score of 89 – the highest yet for a smartphone.

The Pixel XL measures in at 154.7 x 75.7 x 8.6mm and weighs in at 168 grams. It comes in Quite Black, Very Silver, and Really Blue (as a limited edition.) A rear-mounted fingerprint sensor will allow you to unlock your device or authorize mobile payments. Android Pay will be part of the package as well. It will be running Android 7.1 Nougat out of the box. The 32GB Google Pixel XL is IP53 rated and will cost you about $770.

I had to go with the new Google Pixel XL as the winner of this comparison. Both devices are excellent, well-built, high-end, have the best specs, and worthy of being called a flagship device. Price is not a factor here, so the winner is based wholly on its merits.

The Google Pixel XL has an AMOLED display, the upgraded Snapdragon 821 processor, the same Adreno 530 GPU, The same amount of RAM and the same faster UFS 2.0 internal memory – true there is no expansion on the Pixel XL, but you can get 128GB model if you would like. The camera has already been rated the top device for pictures, and it has a larger 3450mAh non-removable battery with Quick Charge 3.0. It is also IP53 rated.

The LGV20 does have the secondary display, the duo camera for wide-angle shots, expandable storage, special sound qualities, and a removable battery. While it does come running Android Nougat, the Pixel XL is running a newer version of Nougat and will receive its future updates long before the LG V20.