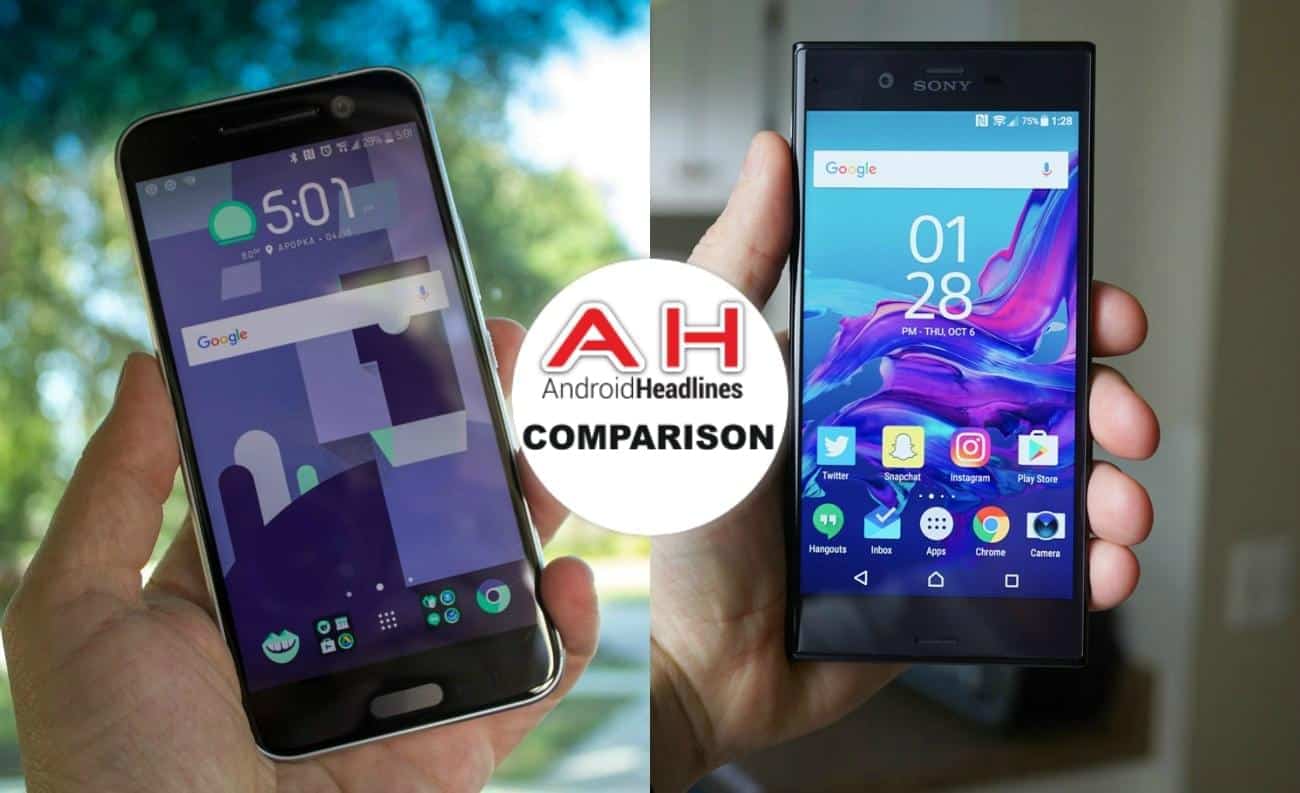 Do we have a good one for you today – the HTC 10 that started our love affair with metal construction goes up against the new all-metal Sony Xperia XZ. The nod in the looks department would have to go to the HTC 10. Sony has retained its typical rectangle shape, large bezels at the top and bottom, and its FHD display. The devices do share many of the same internal parts and specs, but the overall feel of both devices are quite different. Let’s take a look to see just what these two devices have in common and then we will take a closer look at each device.

The HTC 10 and Xperia XZ do have many things in common, starting with their display and physical size – they even weigh the exact same 161 grams. Both 5.2-inch displays also use the same LCD technology, although they part ways when it comes to resolution. Both of these devices use the same processor – the 64-bit Snapdragon 820 quad-core coupled to an Adreno 530 GPU to handle the most intense graphics. Both devices offer 32GB/64GB of expandable internal memory. The two devices offer great photos but go about it in a different manner. The HTC 10 and Xperia XZ both include Hi-Res audio and excellent speaker systems. The Xperia XZ has dual front mounted stereo speakers while the HTC 10 offers a bottom-mounted speaker for the woofer-type speaker and a front-facing speaker to handle the high notes. Both have a non-removable battery that uses Quick Charge 3.0. The usual suspects are there – WiFi, Bluetooth v4.2, GPS, NFC, and the newer Type-C reversible USB port for charging and data transfer.

The HTC 10 is the best smartphone HTC has made to date. While they started the all-metal revolution a few years back, this new bold design, with high-end specs, QHD display, great sound, and a great camera make it a robust package. Let’s see just how well it stacks up to the new Sony Xperia XZ.

The HTC 10 sports a 5.2-inch Super LCD5 QHD display with a resolution of 2560 x 1440 pixels and 565 pixels-per-inch (PPI.) HTC grabbed up the best processor they could in the Qualcomm 64-bit Snapdragon 820 quad-core with dual cores clocked at 1.6 GHz and dual cores clocked at 2.15 GHz and an Adreno 530 GPU for graphics. The HTC 10 is packing 4GB of the faster DDR4 RAM and 32GB of internal memory that is expandable to 256GB via a microSD card.

The camera area is one that HTC has always treated as a ‘playground’ always trying new things but never getting it quite right. The HTC 10 finally has all of the right pieces – a 12MP sensor with its UltraPixel 2 for capturing more light and image and then added laser autofocus, a dual-tone LED flash, a large aperture of f/1.8 and OIS. The FFC uses a 5MP sensor, with a large f/1.8 aperture, a wide-angle lens, OIS, and HTC even included an on-screen flash to ensure excellent low-light selfies and video chatting. Powering the device is a 3000mAh non-removable battery. It uses Qualcomm’s Quick Charge 3.0, which will give you up to a 50-percent charge in only 30 minutes.

HTC moved their infamous BoomSound around to accommodate the front-facing fingerprint sensor. They placed the ‘low-end’ speaker on the bottom of the device, and the high-end sounds now originate from the earpiece. HTC did rename it to BoomSound Hi-Fi to show the distinction. HTC also included Hi-Fi circuitry for great sounding music for your earphones. The HTC 10 measures 145.9 x 71.9 x 9 mm and weighs in at 161 grams. It comes in Carbon Grey, Topaz Gold, and Glacier Silver and it will cost you about $650 with 32GB of memory.

After all, of these years, Sony is still trying to figure out how to market a smartphone in the US. It is hard to believe that new employees have not come up with the solution – a QHD display, service on all networks, NFC, and a fingerprint sensor. The Xperia XZ did find its way to the US quicker than usual, but it is missing the fingerprint firmware that enables it to work. The device will only work on GSM networks – AT&T or T-Mobile – so that means no Verizon or Sprint networks. If you are brave enough to flash the UK firmware to the US Xperia XZ, you can use the fingerprint sensor. See what I mean, why does Sony make it so difficult for the US to use their devices? The Xperia XZ retains the new all-metal backing design, its unmistakable rectangle shape, and large top and bottom bezels. At a price of $699, it should have all of the bells and whistles – including a fingerprint sensor and the ability to work on all US networks.

The Sony Xperia XZ sports a 5.2-inch IPS FHD display with a resolution of 1920 x 1080 pixels and 424 PPI. Sony is still using an FHD resolution rather than a QHD display but insists on charging as if it is the higher resolution. Sony did use the 64-bit Snapdragon 820 quad-core processor with dual cores clocked at 1.6GHz and dual cores clocked at 2.15GHz but packed only 3GB of DDR4 RAM and 32GB or 64GB of expandable internal memory.

Sony used its new 23MP Sony lens in the Xperia XZ with an aperture of f/2.0, 24mm angle, phase detection autofocus (PDAF) and laser autofocus, and LED flash. Sony included a large 13MP FFC with a f/2.0, 22mm to give you great selfies or video chats. The Xperia XZ is packing a 2900mAh non-removable battery with Quick Charge 3.0 to provide a rapid charge.

The Xperia XZ does have its IP68 certification for dust and water resistance. The Xperia XZ can produce some good sounds with its Hi-Res audio and its dual front-facing stereo speakers. It measures 146 x 72 x 8.1MM and weighs in at 161 grams. It comes in Mineral Black, Platinum, Forest Blue, or Deep Pink. Sony is asking $699 for this newest flagship.

These two devices are so evenly matched I thought it would be a very tough decision to pick a winner – however, Sony did not let me down. With the lack of a QHD display, no working fingerprint sensor, a device that only works on GSM networks like AT&T and T-Mobile, and less RAM, and higher price tag, it was easy to pick the HTC 10 as the winner of this comparison.

The Sony Xperia XZ does employ an IP68 certification for dust and water resistance, but that feature alone does not qualify it for a $700 price tag. The HTC 10 is just a better value.