Chinese microblogging site Sina Weibo is a great source for leaks concerning new devices coming out of the woodwork, and devices from the service’s native China are certainly no exception. One such device, the OPPO R9s, recently showed up on the service in the form of a sheet of AnTuTu Benchmark stats, showing off the device’s upper mid-range chops. The R9s has already been the subject of numerous leaks, along with pictures from its official run through TENAA’s offices hitting the web. To put icing on the cake, OPPO has already sent out invites for the phone’s launch, making this newest leak more of a confirmation than anything else.

As would be expected of a quasi-flagship, we have Android 6.0.1 (Marshmallow) running the show, which isn’t all that old just yet, with some devices still awaiting their update. That OS is running on a 64-bit Qualcomm Snapdragon 625 processor, with 4GB of RAM and 64GB of internal storage backing it up. A pair of 16-megapixel cameras ensures great pictures on both sides, while a screen with a resolution of 1,920 x 1,080 makes VR somewhat feasible and provides a more than adequate viewing experience. That’s about where the leak stops, but everything seems to line up quite nicely with what we’ve previously seen as far as the specs go. A 5.5-inch panel is a good match for full HD, and a 2,850mAh is said to power things, which would provide ample lifespan paired up with the power-sipping Snapdragon 625.

The R9s is supposedly sporting a brand new design in the antenna, allowing the integration of various slots and streamlining the entire internal design of the phone as a result. OPPO is already heavily advertising the phone and interacting with the press, so expectations for it seem to be pretty high. The device is being billed as a flagship by some, so the price may end up reflecting that, though there is no real guarantee on that subject. Along with the fairly decent specs, we will likely see a pretty compelling device make its way out of OPPO’s wheelhouse when the official launch happens on October 19. 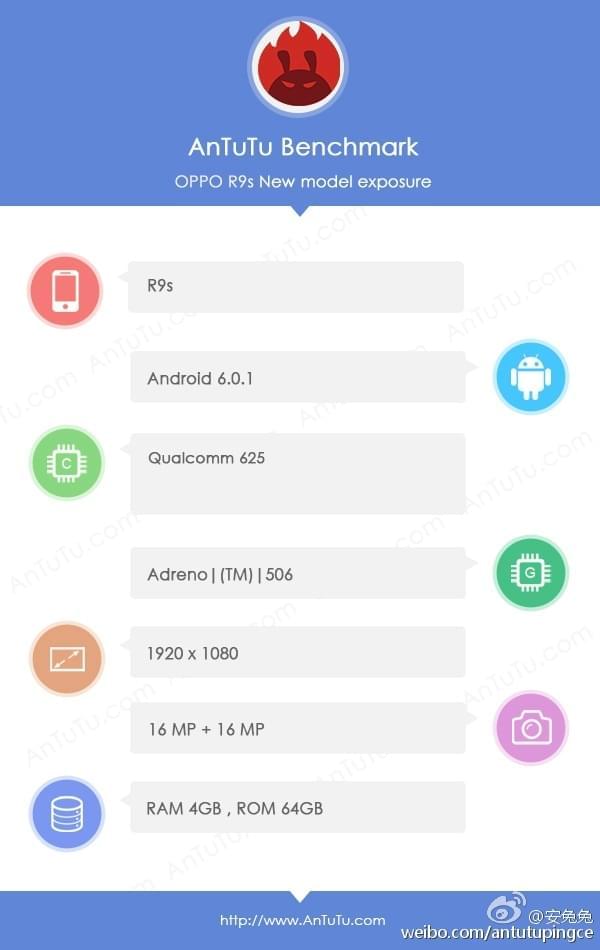