For some time now, it has been understood that LeEco has an event planned in the US on October 19. An event which many are looking forward to seeing what LeEco has to offer, as it largely thought that this event could be the big breakthrough for LeEco in the US. Of course, breaking through will rely heavily on what products the company is unveiling and/or launching. While you can wait for the October 19 event to begin to find out, it does seem as though the full lineup (or at least most of it) has now leaked. Weirdly, on LeEco's LeMall website.

In terms of what seems to be coming, there are two smartphones which look as though they will be unveiled, the LeEco Le Max 2 and the LeEco Le S3. Of the two, the Le Max 2 is going to be a smartphone which some consumers are already familiar with, as it is already available in other parts of the world. Nevertheless, the US listing for the Le Max 2 states it will come with a 5.7-inch Quad HD (2K) display. Inside, the Le Max 2 is listed to come with a 21-megapixel camera, Quick Charge 3.0 support, Android 6.0 (Marshmallow) and is powered by a 3,100 mAh battery as well as the Qualcomm Snapdragon 820 processor. Interestingly, the RAM and storage are not confirmed in the current listing, although the Le Max 2 is known to be available elsewhere in multiple combinations of RAM and storage and is likely why they are not listing the actual figures. However, it will be available in grey and gold colors. 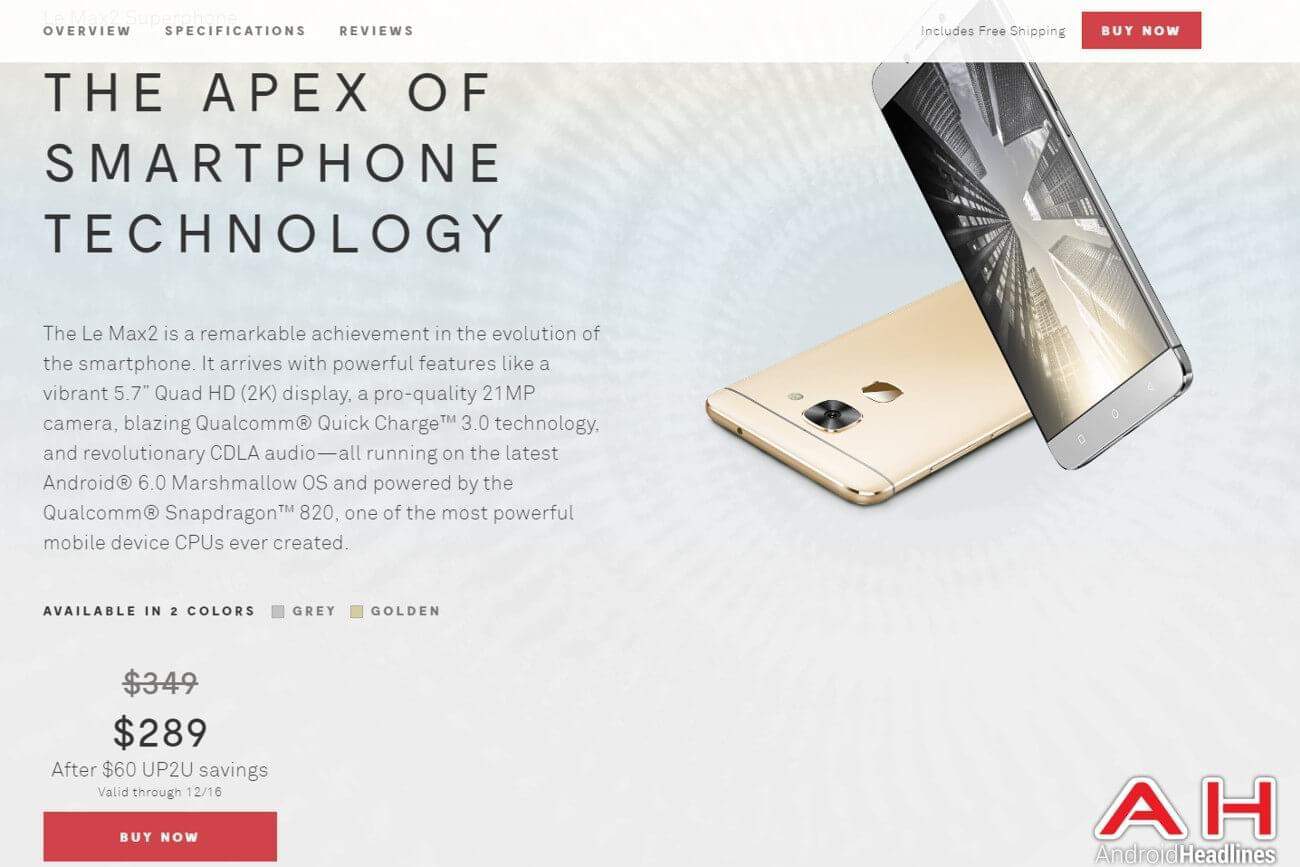 The Le S3 on the other hand is less known, although the specs listed include a 5.5-inch Full HD display, along with 3GB RAM and a Qualcomm Snapdragon 652 processor. Android 6.0 (Marshmallow) is included, as is a 16-megapixel rear camera, along with an 8-megapixel front-facing camera. A 3000 mAh battery comes powering the device, along with support for Quick Charge 3.0. This one will be available in grey, gold and rose gold colors.

In terms of price, the Le Max 2 looks as though it will be available to buy for $349, although there will be a promotion running up until the end of the year where the smartphone can be picked up at the reduced cost of $289. It is also worth pointing out that this price is likely to be for the baseline RAM/storage configuration and will likely increase as the RAM/storage increases. While the Le S3 will be available to purchase for $299 and will also be part of the same promotion and so will be available at a cheaper price throughout the rest of 2016.

Interestingly, following on from the LeEco acquisition of VIZIO, it looks as though some new TVs are going to be on the way, although not ones which are VIZIO-branded. Not to mention, these are not just any old TVs, as these are Android TV sets. From the leaked details it seems there will be four new sets coming in the form of the LeEco Super4 X43 Pro TV, Super4 X55 TV, Super4 X65 TV and the uMax 85 TV. The main difference seemingly being the size with the model numbers directly relevant to the sizes. In short, a new 43-inch, 55-inch, 65-inch and whopping 85-inch. Generally speaking it seems as though the specs of the TV (besides their sizes) are relatively common to all models so in addition to running on Android TV, these TV will be 4K-supported, come with an unnamed 64-bit quad-core processor and Harman Kardon audio.

In terms of pricing, things are a little more complicated here as while some prices are listed, they seem almost certain not to be the correct prices. For instance, two of the TVs (the 45-inch and 65-inch) are listed for only $14.99. Which sounds shockingly incorrect, although you never know what pricing system LeEco might have in place to attract customers. Although if incorrect, then there is always the chance that the smartphone prices are not exactly reflective of what they will be as well – something to keep in mind.

Of course, the setting up of the website is going to be a natural process as part of the preparation for the launch, but why the details are live to the public already is another matter entirely. Likewise, there is no guarantee as to how long the pages will remain live for, although you can check out the screenshots of most of the products detailed here, included full spec listings for the new TVs in the gallery below.