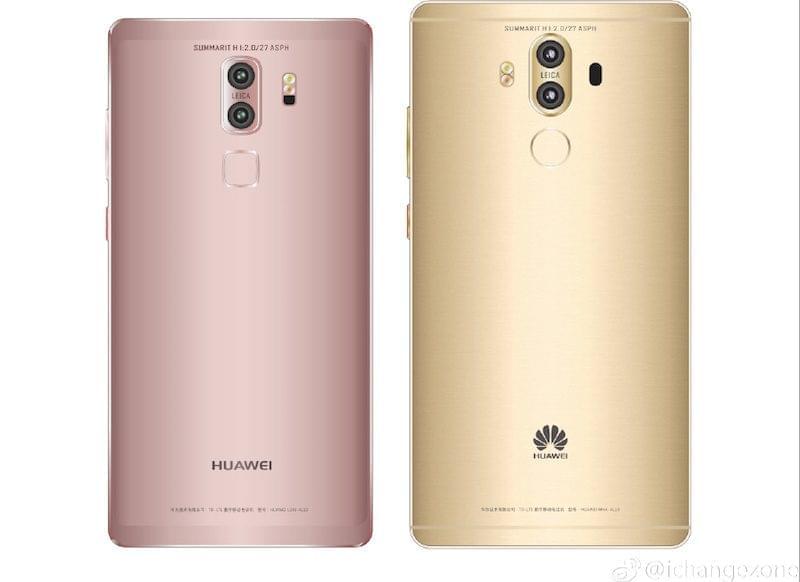 The Huawei Mate 9 appears to be the next big thing being announced in the smartphone world. Huawei has already scheduled an event for November 3rd in Munich, Germany where many are expecting the company to unveil the new Mate 9 smartphone. Although it’s not yet confirmed, it’s highly likely to happen. There’s already been a good number of leaks and rumors surrounding the device, and now it looks like we’re getting a nice look at the backside of the Huawei Mate 9.

In the picture above, you’ll see what appears to be two phones just in different colors, but there are a bit more between these two, in terms of differences. Looking at the camera module, the module is more rounded on the gold one versus the pink (or perhaps “Rose Gold”), the same goes for the fingerprint sensor. The other big change is the LED flash being on the left side and laser auto-focus on the right side of the gold one with the two being together on the pink – and in fact the laser autofocus appears to be smaller. Now perhaps the biggest change between the two is the logo at the bottom. One has a logo that simply says “Huawei” while the other has their entire logo. Perhaps one is set to land in Western markets while the other is going to be in Asia only?

Of course, there is the elephant in the room, so to speak, which is the size of the device. It’s quite noticeable that the gold render here shows a slightly larger device, compared to the pink one on the left. It’s unclear why that is, but it leads many to wonder if there will indeed be two models announced. Earlier renders from this week showed a model with a flat display, and another model with a curved display. It’s unclear which is which in this case, since we are unable to see the front of the device.

The Huawei Mate 9 is shaping up to be a pretty impressive smartphone from Huawei and we could see some even more impressive hardware from the company. Of course, we’ll know much more on November 3rd.