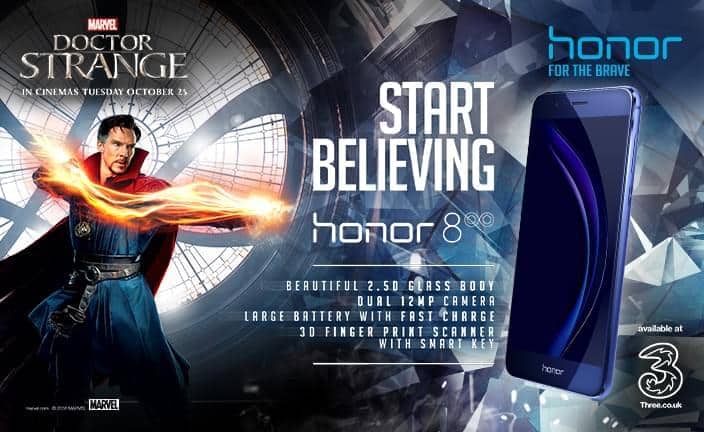 Samsung is the largest smartphone manufacturer out there at the moment, and it has been that way for quite some time now. Now, this company is known for cooperating with other companies and releasing special editions of their already released smartphones. Samsung had introduced the Iron Man edition of the Galaxy S6 Edge last year, and the Injustice Edition Galaxy S7 Edge (also known as the Batman-themed Galaxy S7 Edge) was released earlier this year. Now, we’re here to talk about yet another such cooperation, though this time around Samsung is not in the picture, read on.

Honor and Marvel have decided to partner up in order to release a special edition of the Honor 8, one of Honor’s most popular devices. The Honor 8 was announced earlier this year, and it is available for purchase for $399 in a number of regions, which is a very compelling price point considering this device’s specifications and build quality. That being said, Honor will release a limited edition of the Honor 8 which will come engraved with the ‘Eye of Agamotto’, and this handset is supposed to help promote Marvel’s upcoming Doctor Strange movie which is coming on October 25th. Now, if you live in the UK and are looking to purchase the Honor 8, this might be a great time for it, as Honor has also partnered up with Three, the exclusive UK-based network provider of Honor devices, to give out two adult cinema tickets (for the first 3,000 valid Honor 8 handset registrations) for the Doctor Strange movie and four Marvel movie downloads. The promotion has already started, and it lasts until November 30th, just in case you’re interested. Now, Marvel will also give you a chance to get your hands on the limited edition Honor 8 from the launch of the new film.

The Honor 8 is made out of metal and glass, it sports a 5.2-inch fullHD display, 4GB of RAM and 32GB / 64GB of expandable internal storage. This device is fueled by the Kirin 950 64-bit octa-core processor, while it comes with a 3,000mAh non-removable battery. There are two 12-megapixel cameras placed on the back of the Honor 8, and they’re actually quite capable. Android 6.0 Marshmallow comes pre-installed on the Honor 8, and on top of it, you’ll find the company’s Emotion UI (EMUI) 4.1 skin.