Google are introducing a new feature into both the news.google.com website and in the Google News & Weather applications that’s designed to show readers that the facts have been checked for the given article. Google have been labeling stories for some time now: the company started in 2009 with labels such as “In-Depth,” “Opinion,” “Wikipedia” and as added earlier this year, “Local Source”). The latest new tag is “Fact-check,” designed to show readers that the story has had its facts checked. Or: read here for the truth. The new feature is rolling out for the news.google.com website and both the Android and iOS Google News & Weather applications, although Google are only initially making the change available for the American and British markets at first. Google commonly only release new services into selected markets or regions, only to roll the new features out elsewhere across the world.

Fact-checking has become quite the industry this decade and Google’s blog on the subject highlights that there are currently more than a hundred active fact-checking websites, citing the Duke University Reporter’s Lab as a source. This online resource conducts thousands of fact-checks every year covering all manner of subjects, such as urban legends, health, the media and of course today’s hot potato: politics. The Google News service assesses if an article contains fact-checks in two ways. Firstly, it searches for the fact-check tag in articles and publishers creating fact-checks, and who wish for this to be acknowledged, can use the “fact-check” tag in articles, which the Google News service will identify for tagging purposes. Secondly, Google’s News service is searching for webpages that “follow the commonly accepted criteria for fact-checks.”

Google’s blog post does not explicitly mention the run up to the 2016 U.S. Presidential election, but interestingly enough shows information about the British political environment. Nor does the Google blog on the subject mention the number of hoaxes that circulate the Internet and social media announcing the death of somebody famous, but this sort of fact-checking feature is likely to be very handy for undecided voters checking the authenticity of political candidates or in seeing if a famous person really has died. You can check out how the subtle fact-check tag works in the images below: look for the article titled: “Pregnant women and passports for the NHS.” 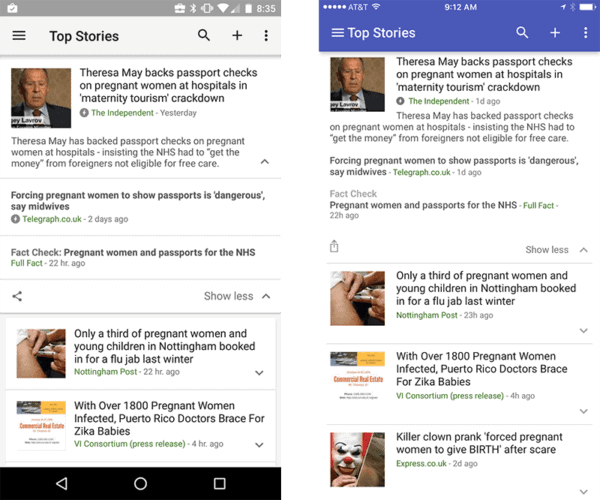