Google have started the global update of the Google Messenger application to v2.0 from v1.9, which is bringing with it a new, rounded icon such that it looks similar to the Phone application in Android 7.1, as installed on the new Google Pixel and Google Pixel XL smartphones. Google have implemented another small cosmetic improvement up matching the notification bar icon to match the application icon. The development team have also revised the color scheme used in Messenger to also match the new Phone application and once in the message list, the team are using slightly smaller profile icons and this gives the application a slightly "denser" look.

Perhaps the most welcome improvement is that Google have removed some of the dead space in the conversation view: messages have a more rounded bubble, similar to Google Allo, but because there is less padding so more lines of message text is now shown and the application has removed the profile icon next to sent messages. There's also a little status marker showing if the message send it either an SMS or MMS. The process for creating a new text message has been revised: the old "Frequent" and "All contacts" screens have been rolled up into the one "Top contacts" area, which shows the eight most popular contacts in your address book together with profile icons to simplify sending text messages or even creating group conversations. If you want to message somebody outside of your top eight, the rest of your address book is showing underneath this.

It's good to see Google's development team improving the Messenger application to match the changes in Android 7.1 so quickly and in many respects, it's a shame Messenger is restricted to SMS and MMS messages as it is one of the better applications in the Google stable, being fast and reliable. Google currently has three other instant message applications: it added Google Allo and Google Duo earlier this year, bringing instant messaging and video calling functionality to Google Messenger's SMS and MMS functions. Google Hangouts, however, includes all of these features but uses a different protocol and communications standard. We've no word on when these other applications will be updated to better match Android 7.1, meanwhile the update to Messenger 2.0 is rolling out via the Google Play Store. 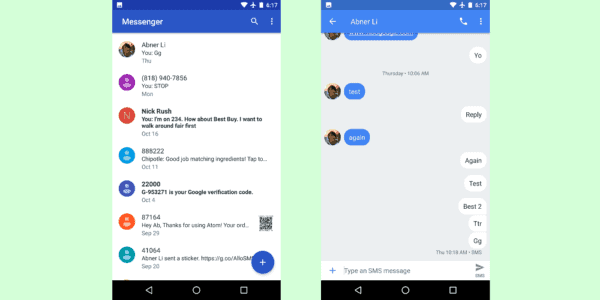 Advertisement
Trusted By Millions
Independent, Expert Android News You Can Trust, Since 2010
Publishing More Android Than Anyone Else
38
Today
177
This Week
705
This Month.
705
This Year
110859
All Time
Advertisement