According to a new report originating from market research firm IDC, Samsung Electronics has been losing market share throughout the third quarter of the year (July-September period), allowing China’s top three smartphone manufacturers (combined) – including Huawei, OPPO and Vivo – to overtake the South Korean tech giant for the first time.

Over the past few years Samsung has been leading the smartphone market in terms of global share with relative ease, but as China’s top smartphone manufacturers continue to increase their presence in the global market, Samsung Electronics seems to be losing ground throughout the third quarter of the year. According to research firm IDC, Samsung manufactured 72.5 million smartphones in Q3 2016 (July – September), whereas Huawei, OPPO, and Vivo combined have manufactured a total of 80.1 million smartphones throughout the same period of time. These figures give Samsung a global market share of 20% (down from 22.4% in Q2 2016), and give the three Chinese smartphone makers combined a market share of 22.1%. Of course, Samsung is still in the lead given the fact that Huawei, OPPO, and Vivo hold 9.3%, 7.0%, and 5.8% global market share independently. However, this is the first time when China’s top three smartphone makers outperformed Samsung’s global performance when uniting their forces, and it’s an indicative that the South Korean tech giant has been struggling to maintain its position at the top throughout the third quarter of the year. According to IDC, part of Samsung’s market share loss could be attributed to the faulty Samsung Galaxy Note 7 flagship, which was unveiled and shipped in the third quarter of the year (August to be precise), and was the subject of two recalls before it was officially discontinued due to manufacturing defects leading to fire hazards and a hit to the company’s image.

Either way, Huawei manufactured 33.6 million smartphones in Q3 2016 and its global market share rose from 7.6% to 9.3% from one year ago, whereas OPPO and Vivo have produced 25.3 and 21.2 million units, and increased their global market shares by 3.8% and 2.9% respectively, compared to Q3 2015. It’s also interesting to note that, according to an earlier report from late October, both OPPO and Vivo have outperformed Xiaomi and Huawei in China alone throughout the third quarter of the year. 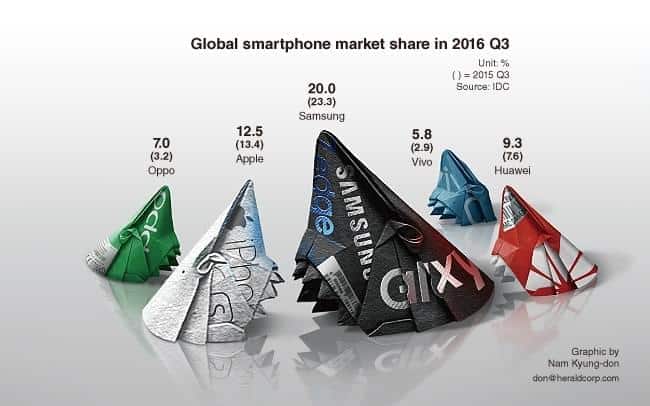