Amazon may be well known for its involvement in drone development, but up until now the company’s efforts in this field have been focused primarily on developing delivery drones as opposed to commercial units for consumers. However, judging by the existence of a patent recently won by Amazon, the company seems to be planning on creating a voice-controlled drone for personal use, small enough to fit in the user’s pocket.

The patent application describes how the pocket drone might work and what uses it might have. To begin with, the unit is described as being able to receive voice commands, and also appears to communicate with an application for various reasons, including a wider range of commands and having the ability to control the device outside the voice activation range. In one example, Amazon explores the idea of police officers using the drones as a better alternative to dashboard-mounted cameras, instructing them through voice commands to “follow” or “hover” and record videos at a traffic stop. “If a foot chase develops during a traffic stop, for example, the officer can command the UAV to follow the suspect so that he can attempt to cut the suspect off in the cruiser.” The patent application gives other examples of how the drone could be used, including finding lost belongings or locating lost children. Apparently, the drone will also be equipped with face recognition technologies which will come in handy when attempting to identify individuals. “The UAV can receive a ‘find Timmy’ command, which can include the ‘search’ routine, and possibly an ‘identify Timmy’ subroutine to locate a person identified as ‘Timmy’.”

All in all, Amazon’s pocket drone seems to have been designed as a voice-controlled personal assistant of sorts; one that can also act outside the “hearing” range through a dedicated application. However, it’s worth noting that most of the uses described by Amazon in the patent application are not legally covered, as they envision the drone flying in populated areas and / or out of the line of sight. Then again, the FAA is expected to have new rules set in place to facilitate commercial drone applications within the next few years, and by then the Amazon pocket drone could be ready for release. 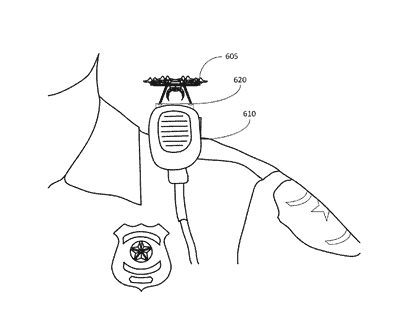