While we’re waiting for the company to release more info about the device, a new leak has just surfaced. Rumors and leaks have been pointing to both 4GB and 6GB RAM variants of the Mi Note 2, well, a new leak says that the 8GB RAM variant might become a reality as well. A screenshot surfaced showing the Mi Note 2’s alleged ‘About Phone’ menu, and as you can see, it lists 8GB of RAM. This screenshot also reveals that this device will be called the Mi Note 2 Pro, and that it will also ship with 256GB of internal storage, and a quad-core SoC running at 2.6GHz, which is almost certainly the Snapdragon 821. Android 7.0 Nougat is also mentioned here, and on top of it, you’ll get Xiaomi’s MIUI 8 OS, MIUI v8.6.9.8 if this screenshot is to be believed.

So, it seems like Xiaomi is planning to release both the regular Mi Note 2 models, as well as the ‘Pro’ variant of the device, which is not all that surprising considering they did something similar with the Xiaomi Mi 5, their current flagship. The Mi Note 2 is also rumored to sport a 5.7-inch display, both the fullHD and QHD variants were mentioned actually. The phone will be made out of metal and glass, and you can also expect to see a physical home key below the display. The Xiaomi Mi Note 2 will also sport a curved display (on both sides), at least if recent leaks are to be believed, though do keep in mind that a regular, flat display, variant had also leaked a couple of weeks ago. 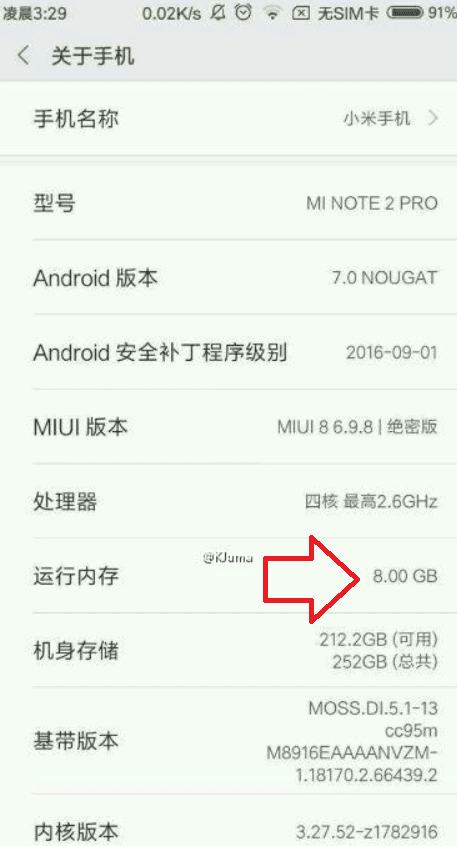