The Xiaomi Mi Note 2 is one of the most anticipated smartphones of 2016, and many people thought that Xiaomi will release it by now, but that did not happen. The Xiaomi Mi Note and Mi Note Pro were introduced back in January last year, and judging by recent reports, the Mi Note 2 will land this month. Reports are saying that Xiaomi plans to introduce this handset on September 14th, We’ve seen quite a few Mi Note 2 rumors and leaks thus far, and it seems like the device has just been certified in China, read on.

According to the info provided by the source, the Mi Note 2 just got certified by China’s CCC (also known as 3C) authority. Now, once phones get certified by CCC, they usually find their way to TENAA (China’s equivalent to the FCC), so we can expect the Mi Note 2 to hit TENAA in the coming days, or maybe weeks, who knows. Unfortunately, the 3C certification does not really reveal any specifics about the device it seems, so we’re once again left with what rumors and leaks have been reporting, TENAA’s listing will be far more informative, that’s for sure. In any case, the Mi Note 2 is actually expected to arrive in more than one variant, at least if rumors are to be believed. Both the flat screen and curved screen models are said to be available, and the highest-end variant will, allegedly, sport a 5.7-inch QHD display, 6GB of RAM and 128GB of internal storage. The Xiaomi Mi Note 2 (all variants) is likely to ship with Android 6.0 Marshmallow out of the box, with Xiaomi’s MIUI 8 OS on top of it, while the device will be made out of metal, though a metal + glass combination is also a possibility, we’ll know far more once the device stops by TENAA and shows off its design and specifications.

As already mentioned, the device is expected to launch on September 14th, though Xiaomi still has to confirm this date. Reports are also stating that the device might ship to early adopters on September 24th, and the phone is rumored to cost around $450. Take all this into with a grain of salt, as per usual, as none of these specs have been confirmed just yet, nor the phone’s pricing. 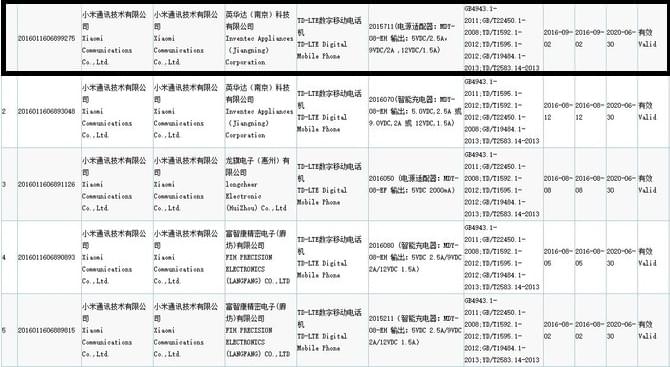