Social media companies / applications have taken over the world. Well, that might be an overstatement, but when you look at companies like Facebook or Twitter, you get the idea, the power of social media nowadays is incredible. Chances are, that every single one of you uses at least one social media site and its belonging app, though most of you probably rely on more than one. There are tons of social media services available out there, and applications that go along with those services. Well, we’re here to list some of the most popular ones, though as already mentioned, there are tons of them out there and we could not fit everything on this list, of course. Before we begin, though, do remember that the apps are listed in no particular order. In any case, let’s see which apps made the list, shall we? 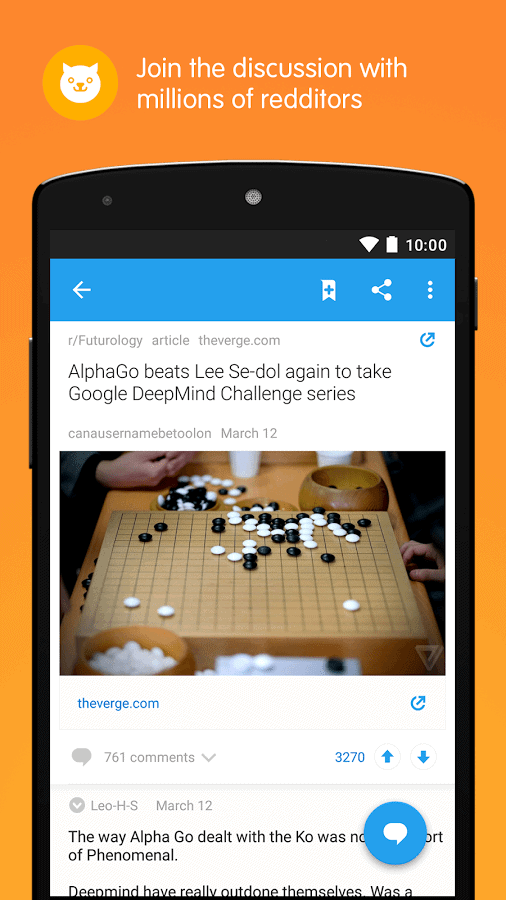 Reddit is definitely one of the most popular social media sites in the world, and the company’s app is quite compelling as well. It took a while for Reddit to release an official app, as it arrived back in April, and even though it had a couple of hiccups along the way, this app is now quite popular and quite useful. It’s also worth mentioning that the app is well designed, which is extremely important, especially for a service like Reddit where you scroll through tons of posts and comments. 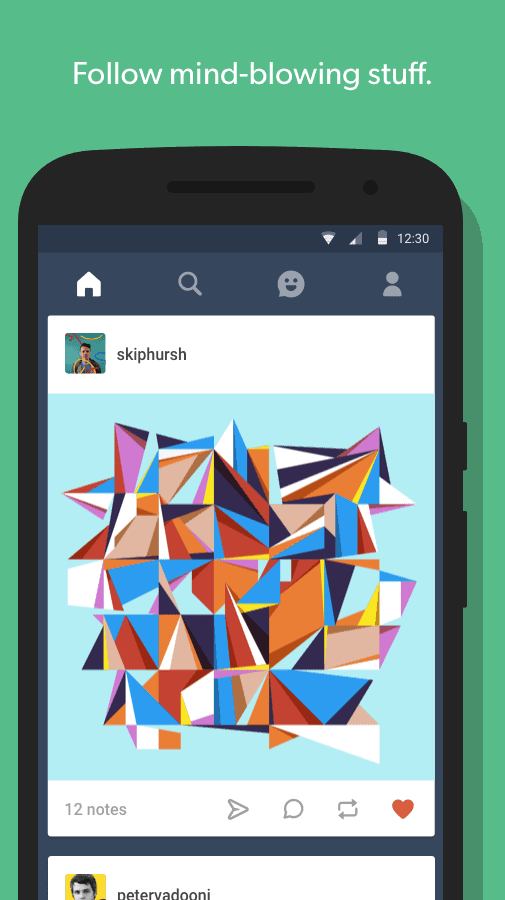 Tumblr has been around for quite some time now, and the same can be said for the company’s app, which is quite compelling these days. This app wasn’t exactly the best at first, but it’s actually really, really useful now, and if you’re into Tumblr, the company’s official app is probably the way to go. It features great, clean design, and pretty much all of the options you might need, as you can do almost everything through an app if you want, post, comment, tweak settings, etc. 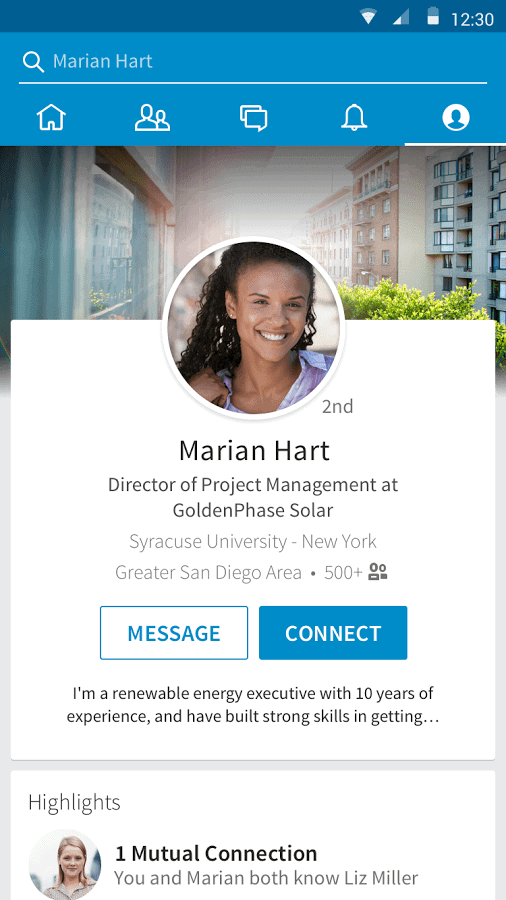 LinkedIn has been around for a long time, and it’s quite a bit different than most of the other social media sites. This social network basically lets you connect with people in a professional way, if you’re aiming to find a specific job or something of the sort, you can basically connect with people in a professional manner. LinkedIn’s app is actually really good, it looks somewhat similar to Facebook, but only because of the main (blue) color, and some design hints. 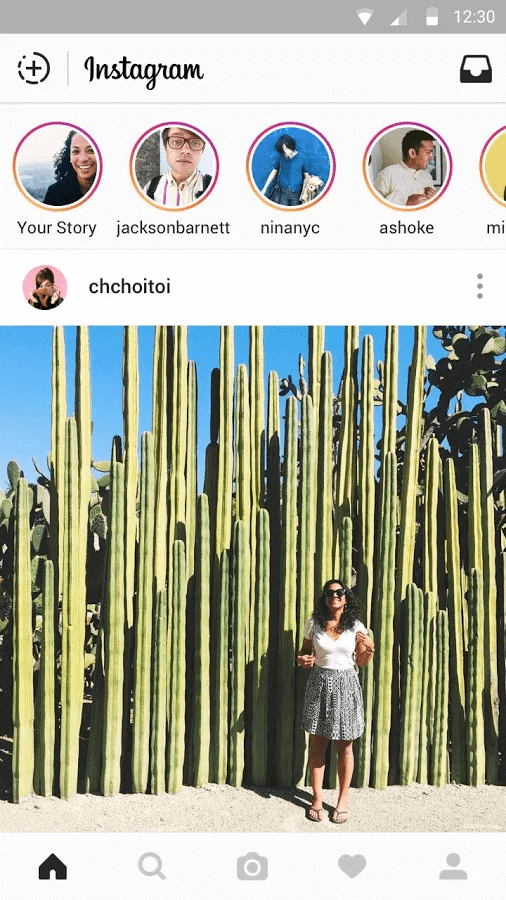 Instagram, as most of you know, is one of the most popular image-sharing sites / services in the world. The company’s app was really useful to begin with, and it only improved over the years. Aside from the regular feed you’re getting, you have tons of additional options when sharing images, like a ton of filters, for example, while most of the older options are still included here, of course. The design is also flat, and the app is generally really a joy to use, it works really well and serves the purpose. 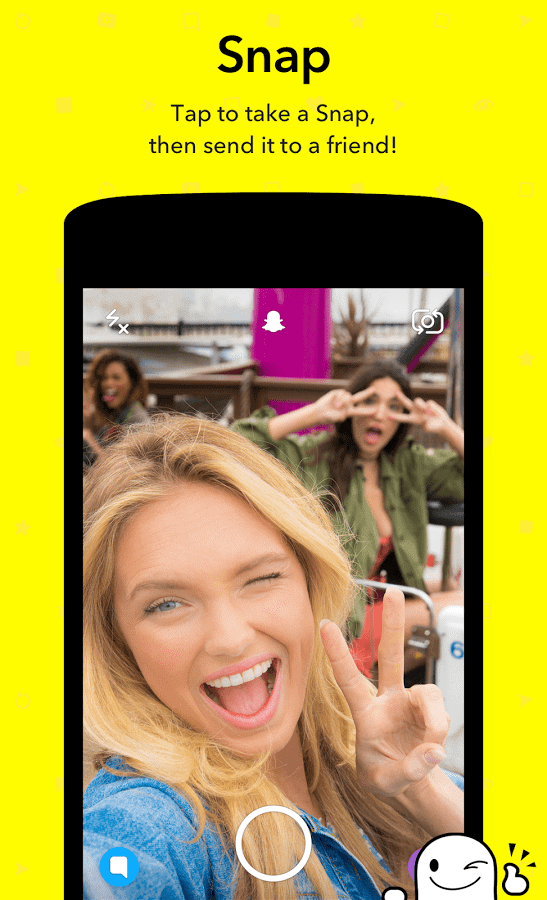 Snapchat was founded back in 2011, and it managed to become one of the most popular social media companies in record time. The Snapchat app had introduced somewhat different interaction with people, which is what makes it so popular. Snapchat lets you share short video clips with your followers, while the app offers tons of additional options, you can attach various images to your person while recording a short video clip etc. App’s design is spot on, a combination between youthful and serious, which is exactly what the design should be for an app like this. 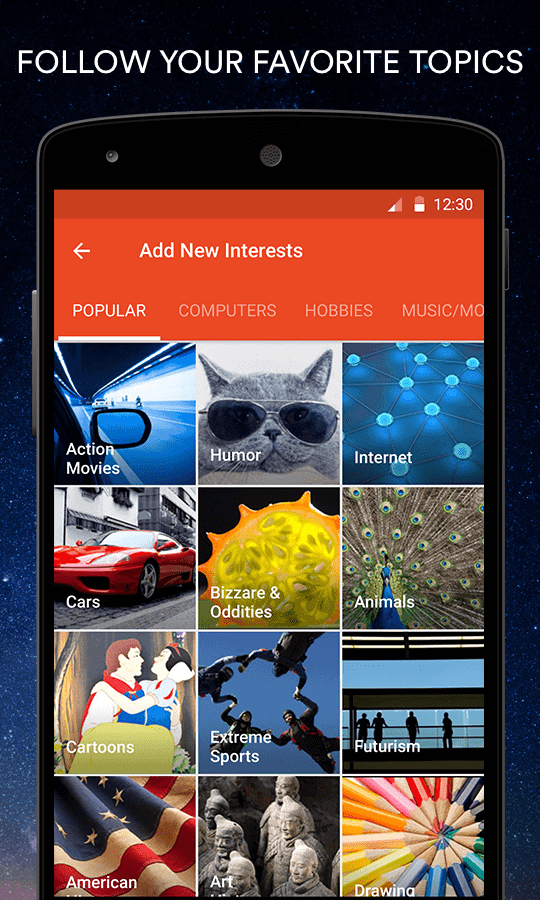 StumbleUpon is yet another social media service which became popular because it’s somewhat different from the rest of the pack. You basically use this app to follow various topics in order to stumble upon (hence the name) stuff that might interest you. The design of StumbleUpon app is quite similar to the rest of the pack on this list, it’s very well-designed, it’s flat and a joy to use. It combines orange (with hints of red) and white colors mostly, and throws quite a bit of pictures your way, which is not a bad thing, at least not to most people. 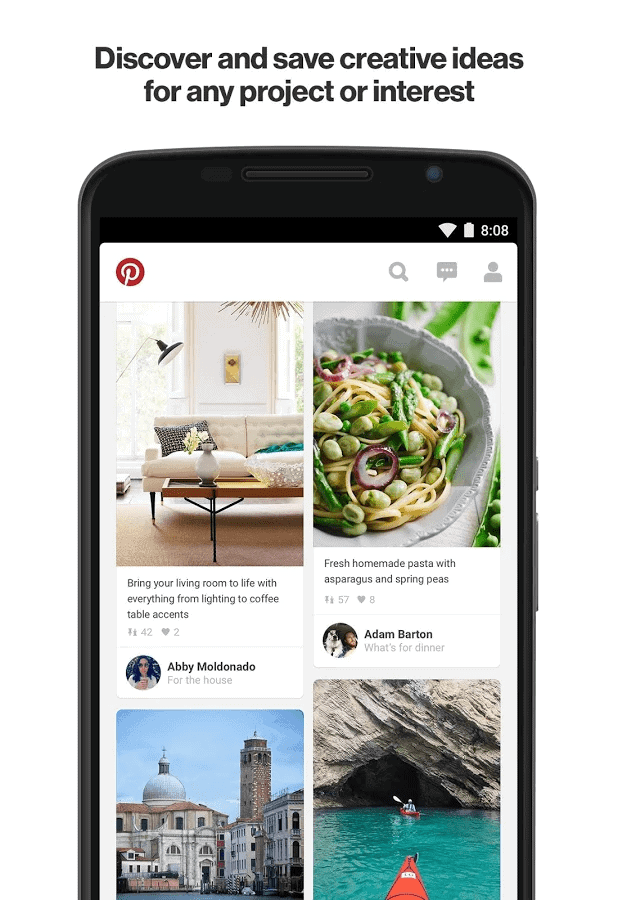 Pinterest is a very popular service, and the company’s app is one of the most downloaded social media apps available in the Google Play Store. This app is flat, clean and much like every other app on this list, a joy to use. Similar to StumbleUpon, you’re asked to choose topics that interest you, after which you’ll see tons of posts on your wall with images front-and-center. You can simply ‘like’ some of those images, or you can pin them to your feed, that’s the way you share stuff on Pinterest. This app takes advantage of various shades of white color and combines that with images, which results in a really nice-looking app, that’s for sure. 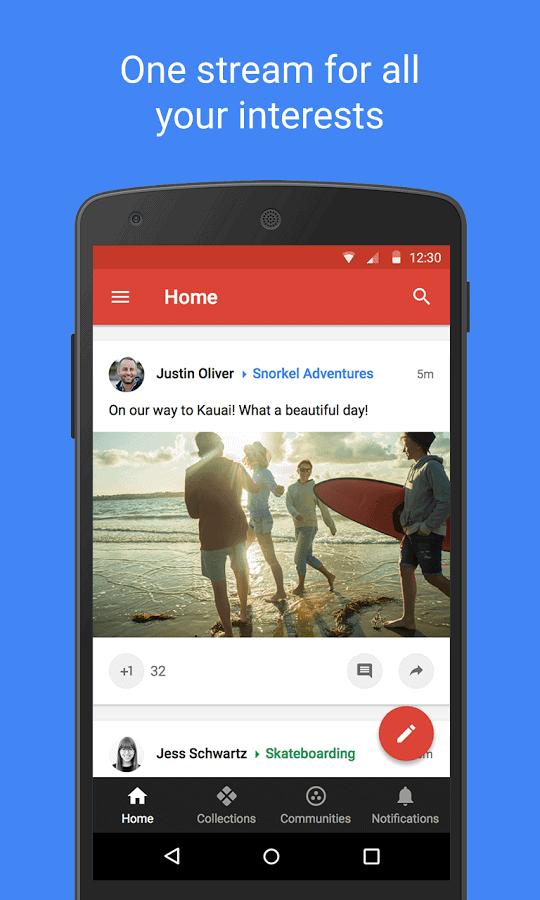 Google+ is Google’s very own social media network. This service hasn’t been as successful as Google had hoped it will, but it has its following, that’s for sure. The Google+ app is quite great at the moment, it was kind of heavy before, but it runs great now, while it also looks really nice as well. It offers flat and clean design, this is Google’s we’re talking about after all, and has all the necessary options you might need from a social media app. 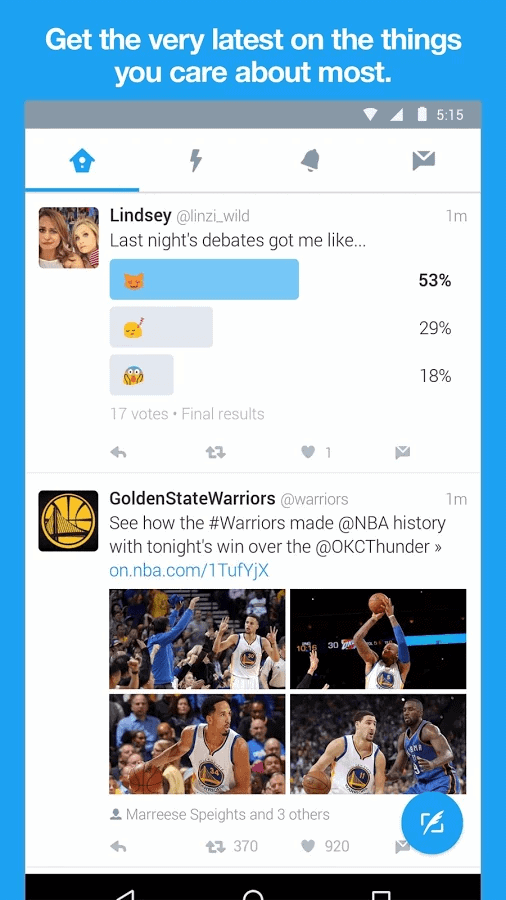 Twitter is, next to Facebook, the most popular social media service in the world. Millions of people tweet out various content on a daily basis, and there are tons of apps to help them do that, but there’s only one official one. Twitter’s official app is really good and functional, though some people prefer third-party options, and there are several really compelling such offerings out there. In any case, The Twitter app looks quite sleek, and offers a familiar interface. You can access pretty much everything you need through tabs up top, though there are additional options available on the side, of course. 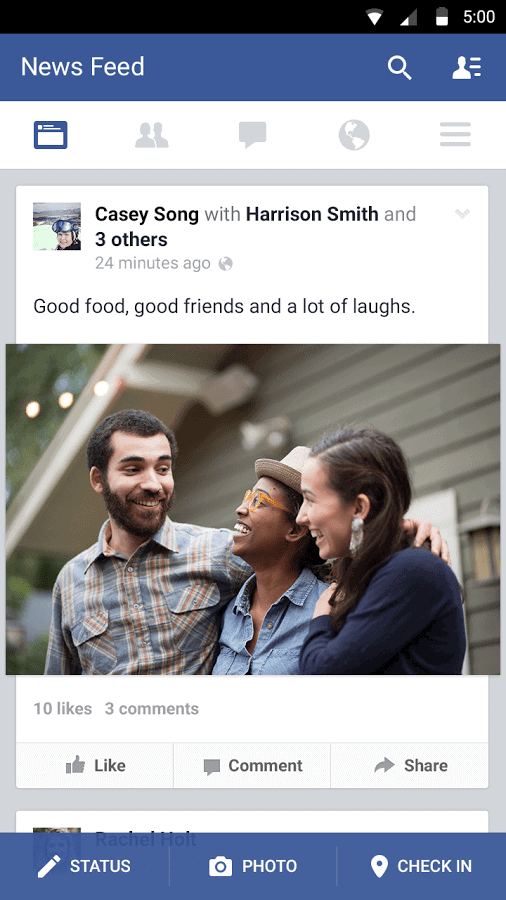 Facebook is the largest social media service in the world, by far. Mark Zuckerberg’s creation also comes with an official app, which is actually quite functional. Facebook’s app was extremely heavy before, and it lagged quite a bit, but the company did their best to clean it up, and it works much better now. The official Facebook app is still quite heavy, but you won’t really notice that as you use it, and truth be told, there are some alternatives out there, but those are mostly mobile website wrappers, which will annoy you at one point or other when they start reloading content when you least want that to happen.