It’s that time of year again where a new version of Android is available, and users will be wanting to know when – if ever – they can expect to see the update on their devices. The LG V20 is the first device to launch with the latest Android OS. Sony Mobile had officially unveiled earlier in September, during IFA in Berlin, its newest flagship Xperia XZ. Thanks to a leaked slide from the press conference of Sony Slovakia, we know Sony’s plans on which devices are going to get Android Nougat 7.0 and when they will get it. The first devices to get the updates are Xperia XZ and Xperia X Performance.

The slide reveals that the Xperia XZ and the Xperia X Performance are the first priority and for this reason, they will receive the Android N update around October. During November, Sony will roll the second phase of the updates to Xperia X and Xperia X Compact. Following up at the end of the year, in December, it is expected to see Android Nougat on the Xperia Z5 series, Xperia Z3+, and Xperia Z4 tablet. The last and fourth update cycle will be completed with Xperia XA and Xperia XA Ultra. All these updates are related to no-contract devices, while the other devices with a contract will have to wait for their carrier’s approval to be updated. However, the timeline – revealed at the press conference – did not have any new devices listed, we may assume that 2015 Xperia headsets (e.g. Xperia M4 Aqua, Xperia M5, Xperia C4, Xperia C5 Ultra) will not get the update any time soon. It is worth mentioning that Sony along with Motorola, HTC, and OnePlus are the only Android manufacturers who tend to update their high-end devices sooner than the others.

Users will have to wait for the official announcement of Sony Mobile in order to take advantage of the improved Android version. Sony had announced in August that the mobile team has been working to bring this major update to as many devices as possible, and without long-term delays. The race of Android 7.0 Nougat updates has officially begun and we are waiting for more companies to reveal their plans on updating their devices. 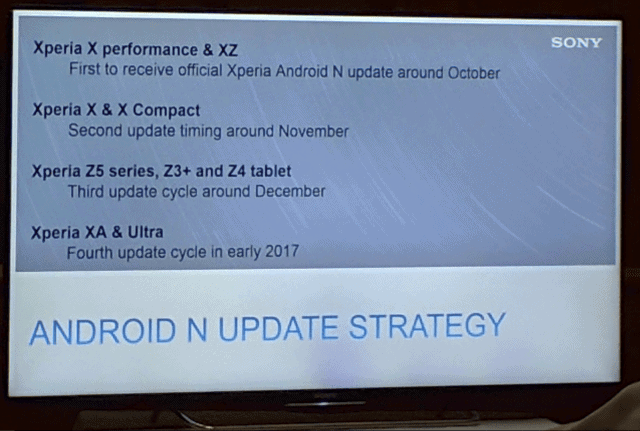