Google had plenty to say during this year’s Google I/O earlier this year, the Mountain View giant had shared tons of info during the conference, while they’ve introduced some new software and hardware as well. The Google Allo and Duo applications were basically announced during Google I/O, even though they were not launched back in May. That being said, the Google Duo had launched a couple of weeks ago and people have been wondering when will Google Allo land, well, a new leak basically reveals its release date.

As some of you might know, a rumor surfaced yesterday saying that Google Allo might launch this week. That info came from @evleaks aka Evan Blass, a well-known leaker. Well, Mr. Blass has decided to follow-up on the previous info he released and reveal the release date of Google’s Allo app. According to him, Google Allo will land on September 21st, on Wednesday. For those of you who don’t know, Google Allo and Duo are Google’s messaging and video calling applications, respectively. Google Duo has been well-received by the community, and it has been downloaded from the Google Play Store over 10 million times thus far, and Google is expecting a similar success for the Google Allo app as well.

Now, Google Allo is basically a messaging app which will come with the Google Assistant integration. Google Assistant has also been introduced during Google I/O, and it seems like this will be the evolution of Google Now, in a way. Google had shown off a number of Google Assistant features, and in combination with Allo, it seems like a very powerful tool, to say the least. You’ll basically be able to purchase tickets for a movie or a concert through Google Allo with some help from Google Assistant, and that’s just one example. The company had announced a while back that Hangouts app and service are here to stay, but that the service will be more focused on enterprise, while Google Allo and Duo will be consumer applications for messaging and video calling. That is more or less it, Google’s Allo app is expected to land on Wednesday, so stay tuned. 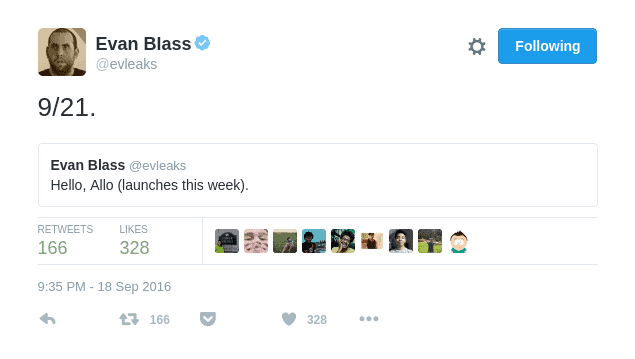