Earlier this summer, at Lenovo Tech World the company announced the Moto Z and Moto Z Force along with the Moto Mod platform. Both of these smartphones – and now the just announced Moto Z Play – are all compatible with Moto Mods which essentially extend the functionality of your smartphone. Allowing you to slap on a pair of speakers, a pico projector or even a battery pack. Now before Lenovo Tech World, there were leaks of a Hasselblad Camera Moto Mod being announced with these devices, but it was a no-show in June. Now it has been announced and we've been using it for the better part of a week with the Moto Z Play. So how well does it work? Well let's find out. 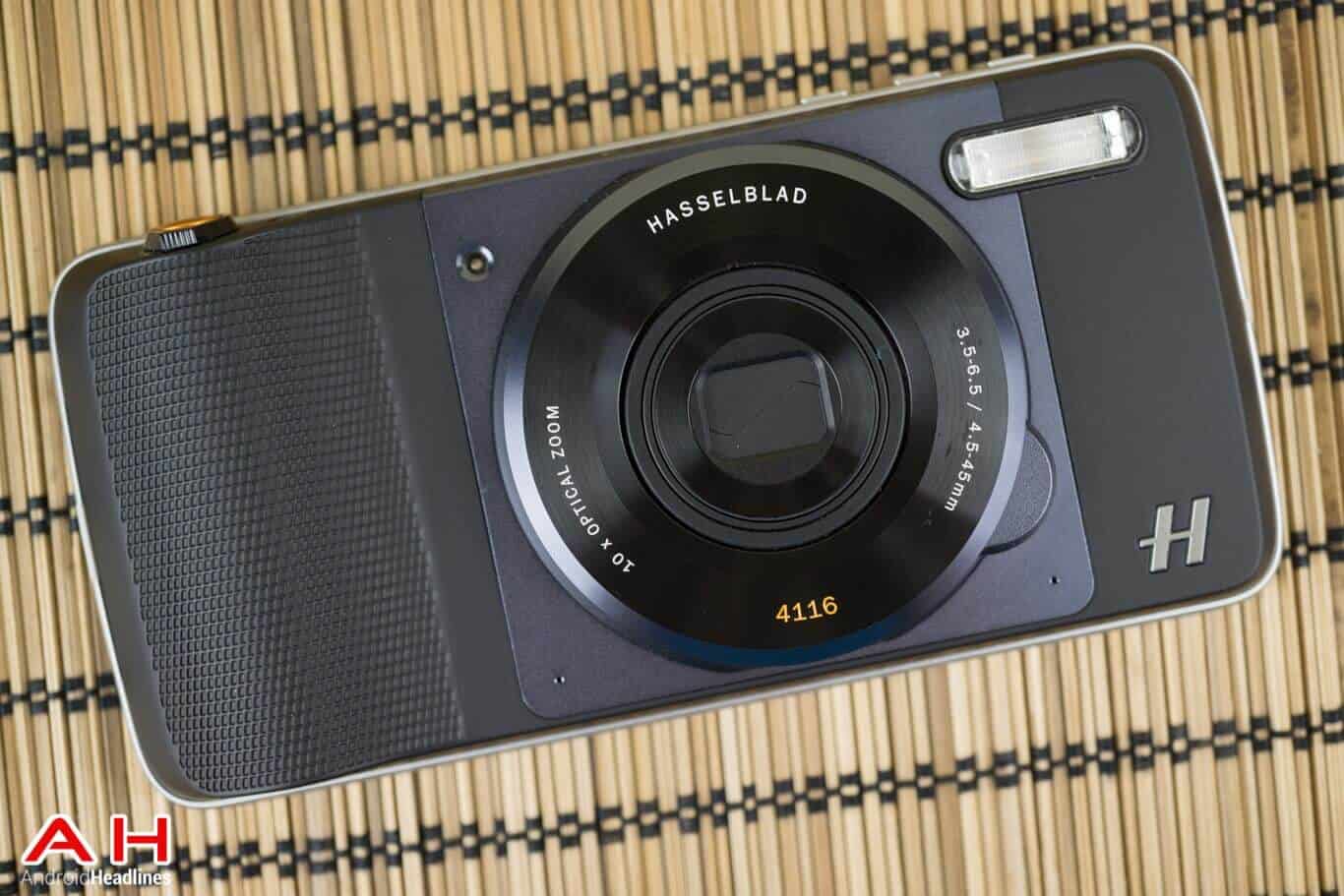 When it comes to design and build quality, you know exactly what to expect with Hasselblad's name on it. Since 1941, Hasselblad has been at the forefront of the photography industry, and their Moto Mod is no different. The camera appears to be made out of plastic and metal and it just looks stunning on the back of the Moto Z Play. The actual sensor is housed in metal, which is great for protecting it. There's a Xenon flash on the right side of the sensor, allowing you to get great lighting even in the dark. What's even more important is that you get even lighting. Something that LED flash modules on smartphones can have trouble with.

Ergonomics are pretty amazing with the Hasselblad camera on the back of the Moto Z Play. As big as the Moto Mod is and as thick as it is, you'd expect it to be a bit uncomfortable to hold. But it really isn't. It has a bit of a chamfered edge, from the sides of the Moto Z Play, which fits it perfectly. The grip isn't as big as I would have preferred, but I was still able to make it work. 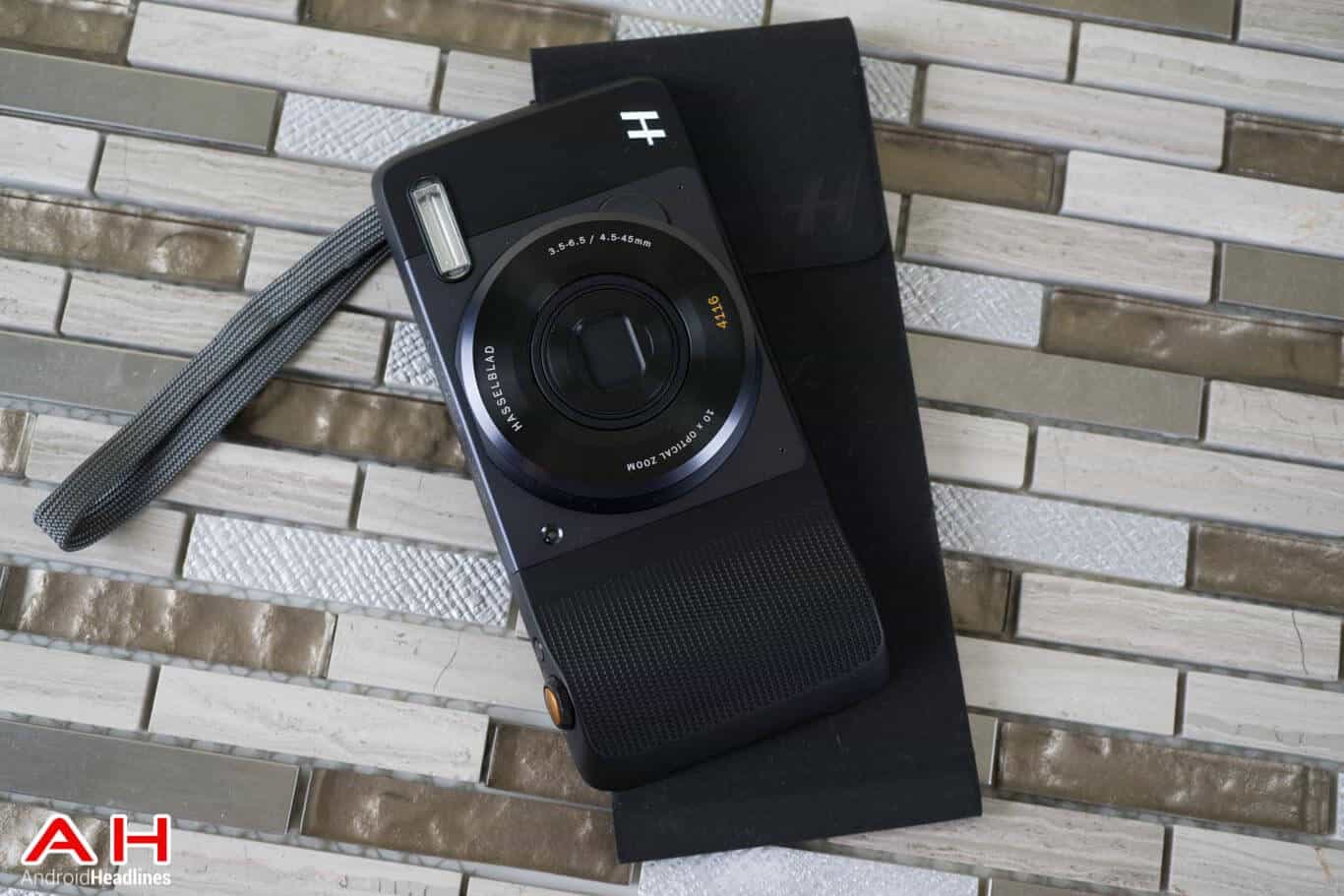 Like many of the other Moto Mods that are already available, the Hasselblad Camera does come with a nice carrying case. It's not a terribly thick carrying case, so it likely won't protect the camera from being dropped – you wouldn't want to drop it anyways – but it will keep it safe and sound. However, something you'll notice in the pictures throughout this post is that it collects dust like a magnet. Which is a bit of a nuisance. The Hasselblad logo is shown on the front with the word "Hasselblad" on the back. There's no hint of Moto or Lenovo branding on this case at all. 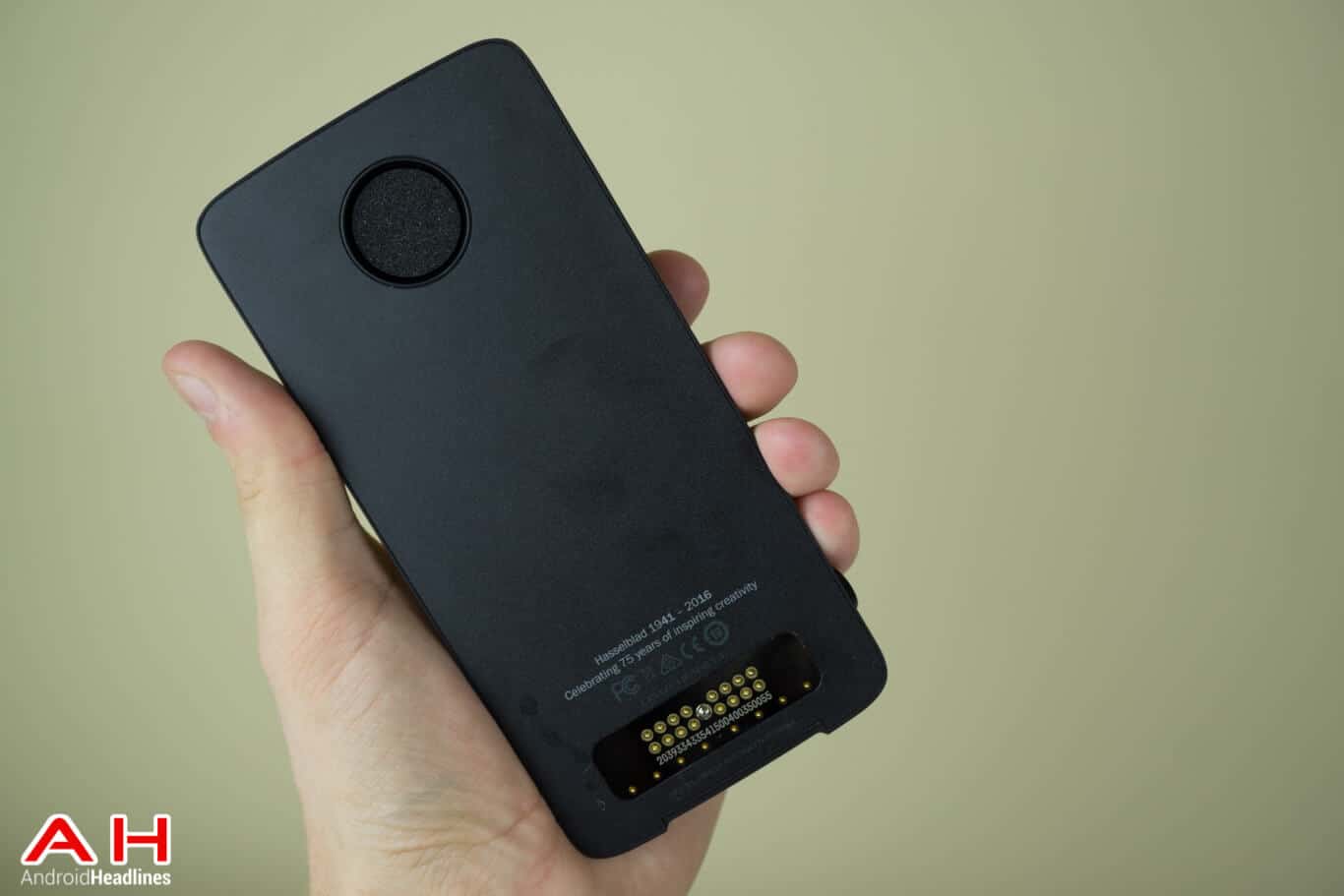 Where some of the other Moto Mods have a built in battery, this one does not. Which means it is using your Moto Z Play (or other Moto Z device) battery to keep things running. It will likely use up more battery than the standard camera, although we haven't done any in-depth tests with this just yet.

As far as attaching it to the Moto Z Play, just slap it on the back of the device and you're good to go. That's literally all you need to do. There's no setup process whatsoever here. It's important to note that we did have an update shortly after using the Hasselblad camera, however. So the consumer model may get that same update. However it was a quick and painless 9MB download to install. So that won't be much of an issue for most people.

The experience with this camera is pretty similar to what you'd find with the regular camera on the Moto Z Play. It actually uses the same Moto Camera. But there are a few other options and features included here. You do still get manual mode, which is something that users are going to love, with this camera. There's panorama and video, but not slow-motion. There are three modes for taking pictures, which are Color (JPEG), B&W (JPEG) and finally Color (RAW+JPEG). The final options is what photographers will love, as they can edit these photos to their liking without the photos going through post-processing. There are eight scenes included, Auto, Sports, Night Portrait, Backlight Portrait, Night Landscape and Landscape. These are all tucked away under the Hasselblad logo located on the left side of the camera app. Just above the timer and flash icons.

With the mod attached, you can quickly jump into the camera app. Simply press the power button on the Hasselblad camera and you'll jump right into the camera. You will be using the shutter button located on the camera to take pictures as well as zooming into objects. Remember this camera has 10x optical zoom and 4x digital zoom. So it can zoom into objects that are fairly far away.

Moto has done a good job with Hasselblad here and their new Moto Mod. Making the experience pretty seamless for everyday users who just want to take even better pictures with their smartphones. There's more features included with the Hasselblad camera on the Moto Z Play, but they keep the app fairly minimal. Something that users really love about Moto's smartphones. 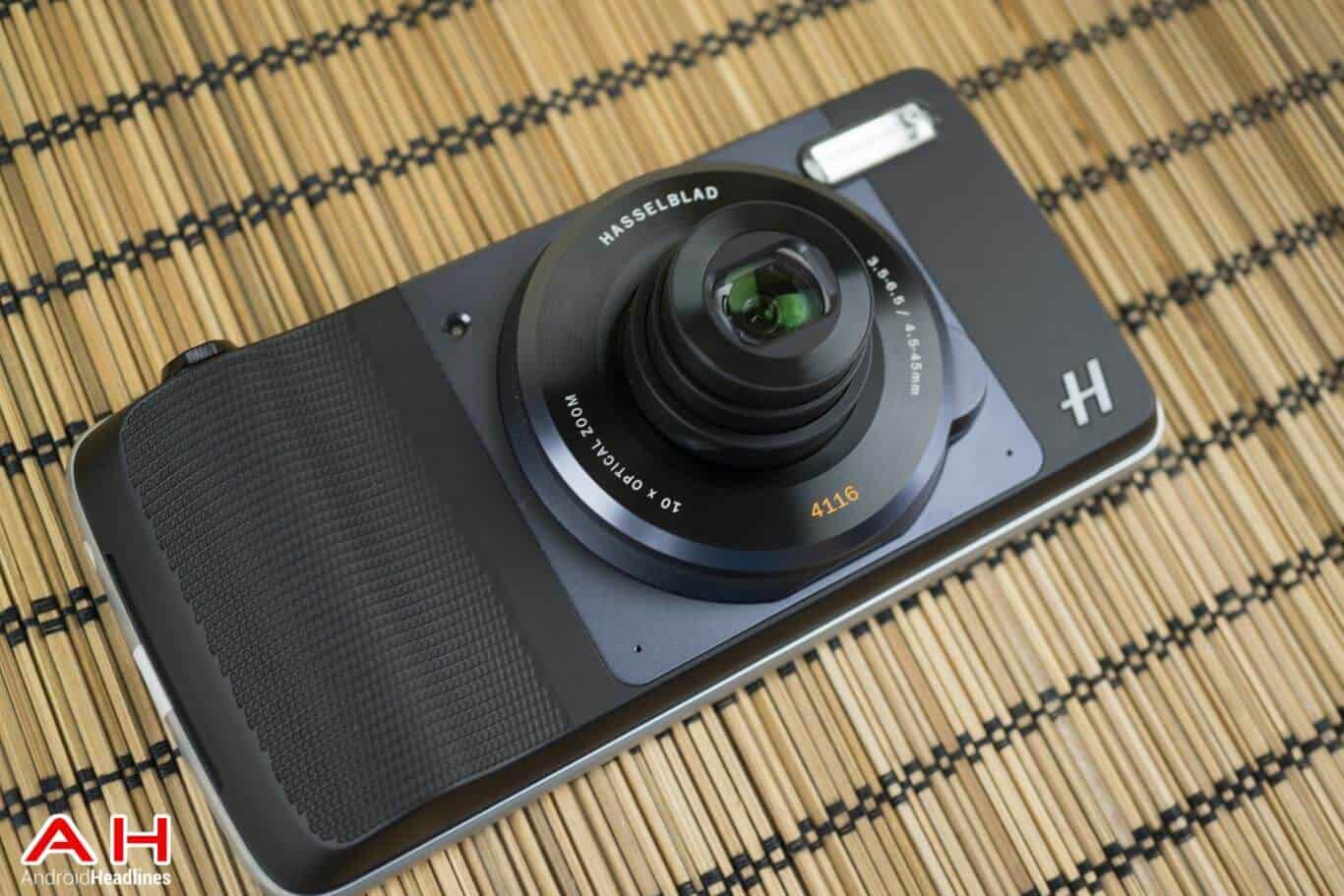 The big question about this Moto Mod is definitely the camera quality. Can this Hasselblad Camera replace your point and shoot or even your DSLR? Probably not. But it does give you another tool for taking pictures, especially if you're planning to carry this Moto Mod with you a lot. We've found that the camera can hold up pretty well in most lighting environments. However indoors in low-light, it does let out quite a bit of noise. We also found that doing side-by-side tests with the Moto Z Play's camera, that the Hasselblad camera photos came out darker. Below is a quick comparison of one of those samples.

Outdoors in direct sunlight, the Hasselblad camera performs exceptionally. As you would expect it to, even though it is a 12-megapixel sensor. Having those extra modes in your back pocket is definitely nice to have. Sometimes you just want to take a photo in black and white, the Hasselblad Camera allows you to do just that. However, the Huawei P9 and Honor 8 also allow you to do that without having to carry around another camera, or spend extra money.

Compared to the Moto Z Play's camera, there's a lot more detail to be found in these pictures. Something that is definitely nice to see. The pictures really just pop out when you look at them. You can find all of the images we took (both the good and the bad) from this camera in the Flickr gallery below. The one of the tree is especially eye popping. 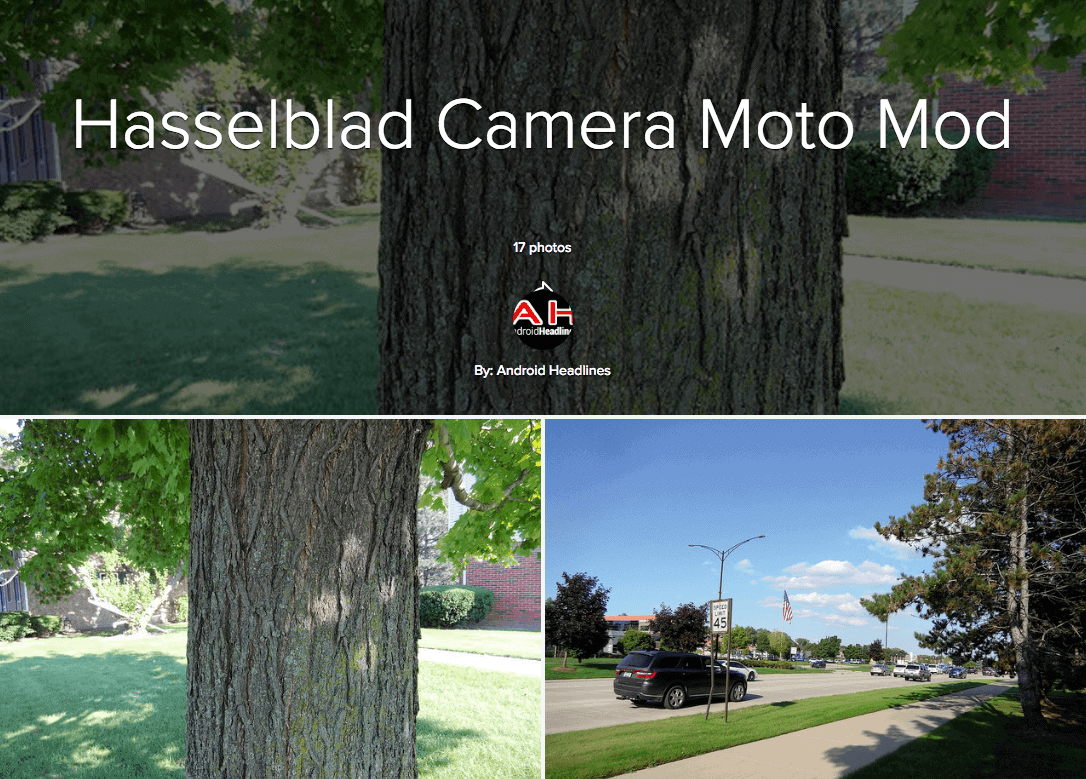 Those that are fans of Hasselblad or are into photography will likely be very interested in this Moto Mod. Hasselblad has been a pioneer in that industry for 75 years now, so they definitely can put out some great cameras. But the real question here is, is it worth picking up this Moto Mod? Probably not, unless you are into photography. For everyday users, you likely won't want to be carrying this Moto Mod around with you every day. And you aren't going to want to keep it on the back of the Moto Z Play, as it makes the device a whole lot thicker. Something that most people aren't going to like.

However, if you are a photographer, go ahead and pick up the Hasselblad Moto Mod, you definitely won't be disappointed, and you can get some RAW images right there on your phone – speaking of which, Snapseed has the ability to edit RAW photos now, so you can edit them right on your Moto Z Play as well.

Advertisement
Trusted By Millions
Independent, Expert Android News You Can Trust, Since 2010
Publishing More Android Than Anyone Else
21
Today
137
This Week
297
This Month
980
This Year
111108
All Time
Advertisement