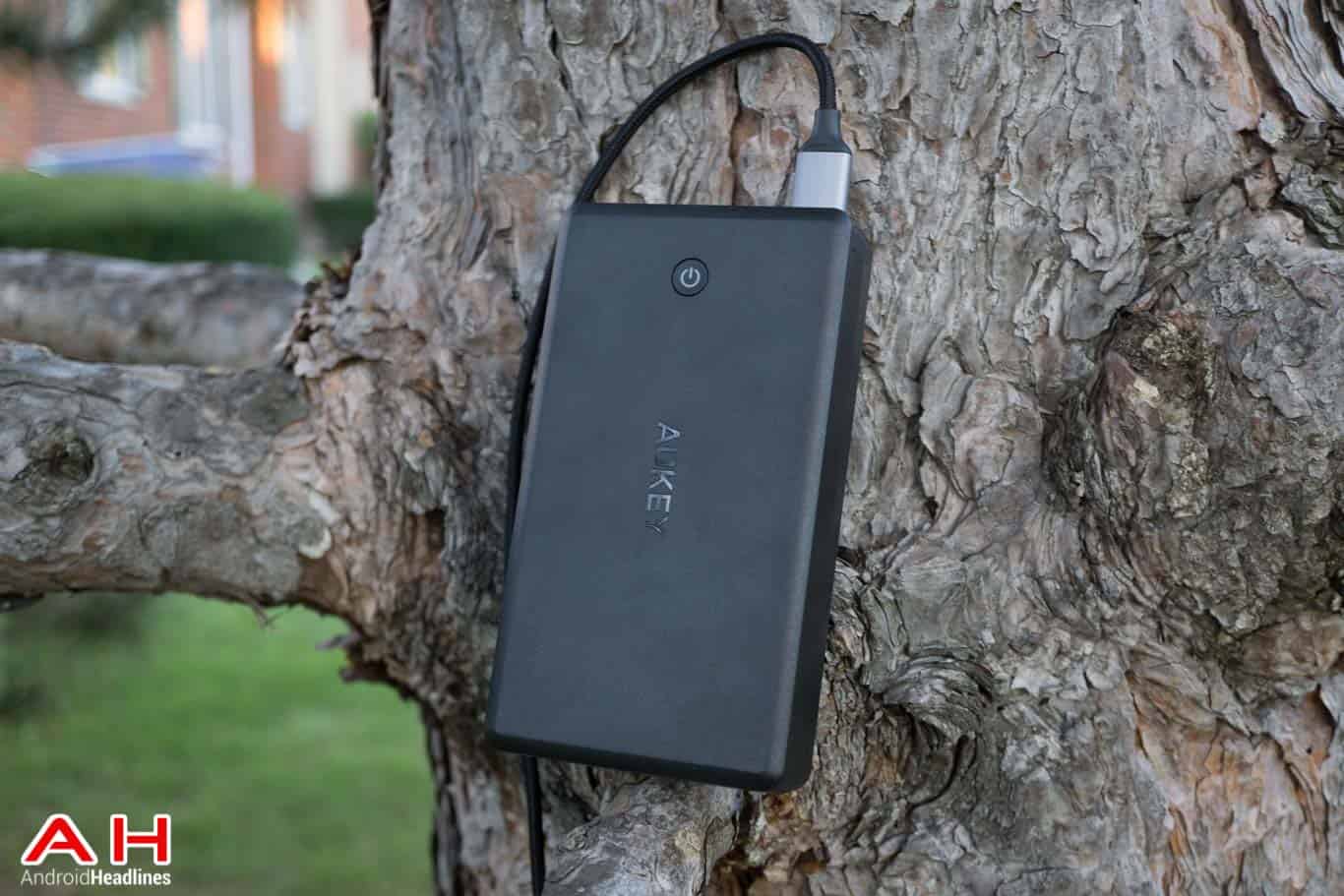 Now that removable batteries are virtually a thing of the past – LG is really the only manufacturer still offering them. Many users have switched over to using portable battery packs, which offer a slew of advantages over a removable battery. For one, these portable battery packs are universal. They will work with anything that uses a USB port. That includes the Chromebook Pixel or even the Apple Macbook. Battery packs also range in sizes, with this one coming in with a whopping 30,000mAh capacity, this is definitely on the larger end from AUKEY. But that's not all that this power bank is sporting. It also has a USB Type-C port included with Quick Charge 3.0 inside. It's safe to say that this is a future-proof battery pack. But is it worth the price tag?

If you have used any of AUKEY's products over the years, then you'll know what to expect when it comes to build quality. It's fairly well-built battery pack, and doesn't feel cheap at all. It's slightly rugged, but that's still no reason to go about dropping this battery pack. Again this is a battery, and dropping it could do a whole lot of harm. As you would expect, given the capacity here, this is a fairly heavy battery pack, especially when compared to some of the smaller 10,000mAh or even 16,000mAh packs that are out there. So this is one that you'll want to leave in your bag and not carry in your pocket while charging your smartphone. 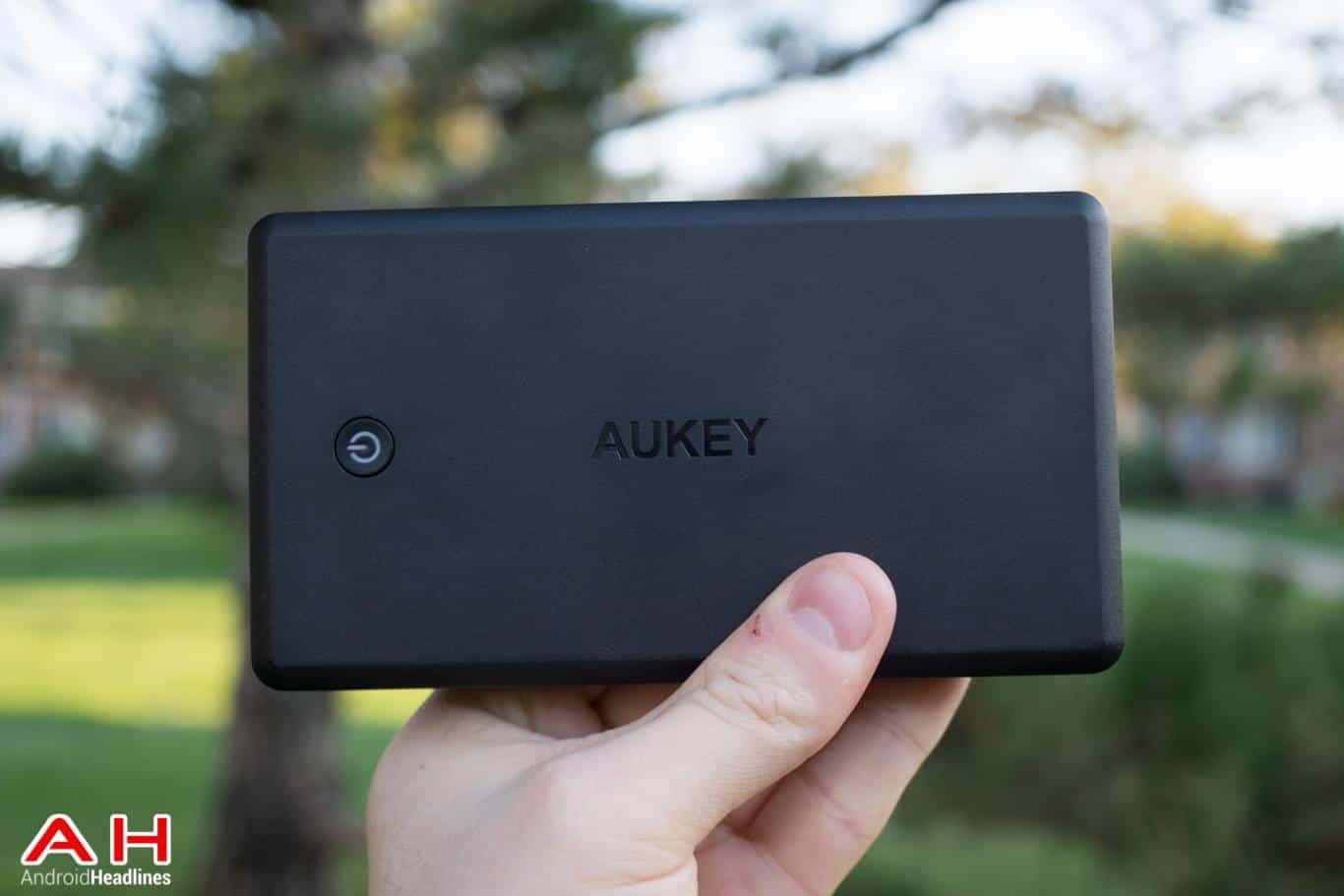 There are two USB ports included here. One is a Quick Charge 3.0 port, which is in orange so you can tell which is which. However both use AUKEY's AiO technology. And to put that into layman's terms, AiO basically talks with your smartphone to find out how much juice it can take without damaging the phone, or whatever else is plugged in. After that, it will push that much juice to your phone, so it is charging your phone as quickly as it can, without damaging it. Even if your phone doesn't support Qualcomm's Quick Charge 3.0 technology. There is also a micro USB port that is used for charging the battery pack, and a USB Type-C port. Now this USB-C port is pretty much what you'd expect from USB-C these days, as it can both charge your phone, or charge the battery pack. Truly making it universal. There is a flashlight included, which is something that a lot of battery packs have been sporting as of late. And it makes a lot of sense. There is a power button on the front. Unfortunately, there is no set of LED lights or even a small display to show how much power is left. However, with this much capacity, you likely won't need to worry about that. 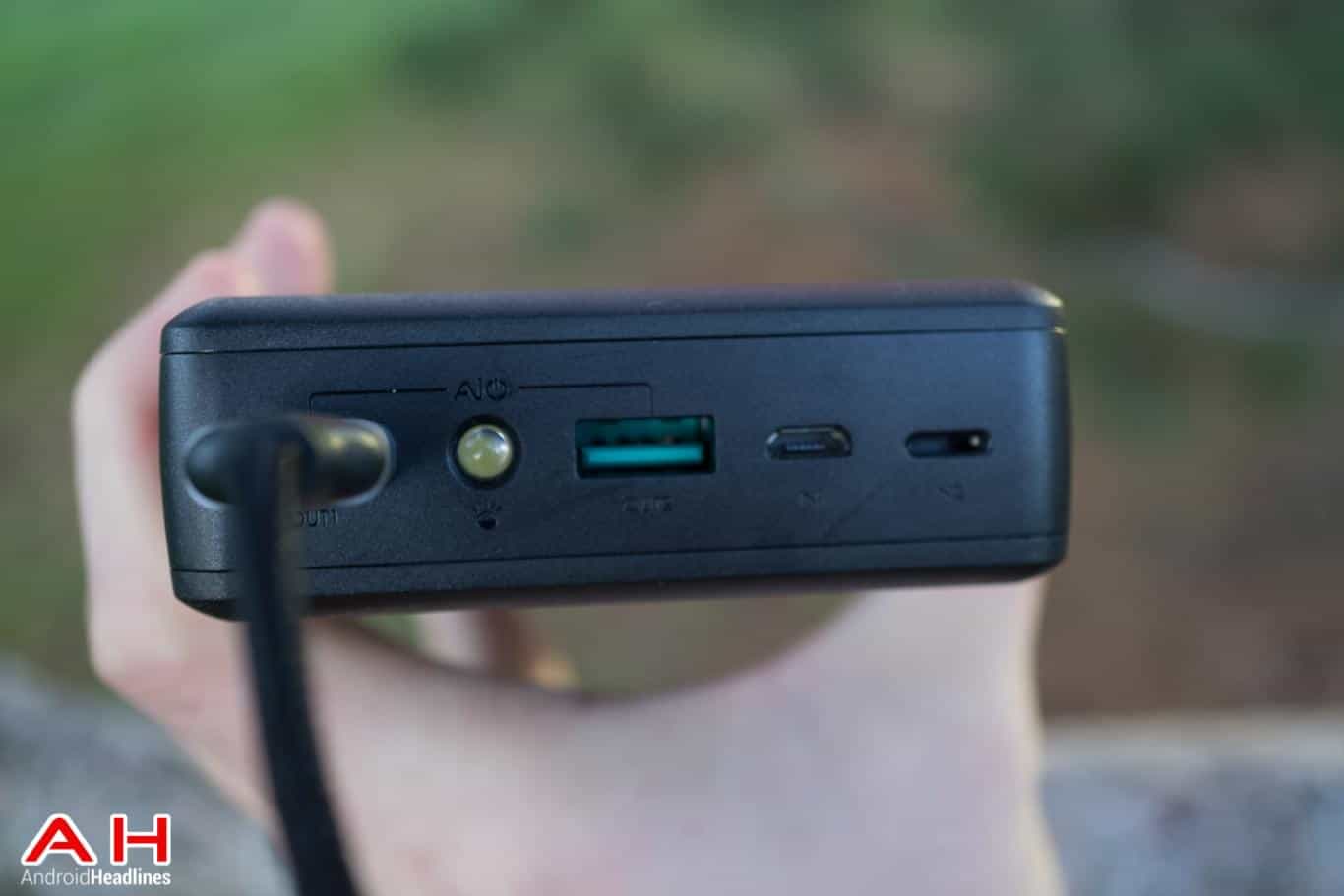 Speaking of power, with 30,000mAh capacity, you should be able to charge most smartphones around 10 times each, before needing to recharge. And through our testing, that appears to be spot on. We've been charging phones like the Nubia Z11, LG G5 and the Honor 8 through this battery pack, which the Nubiz Z11 and LG G5 both sport Qualcomm's Quick Charge 3.0 technology and charge fairly fast with this battery pack. We're looking at about an hour to charge to completely full on both. That's pretty similar to the times you'd see with it plugged into the wall with a certified Quick Charge 3.0 charger. So there's nothing to complain about here. Now the Honor 8 does support fast charging, it's just not Qualcomm's standard. The Honor 8 did still charge fairly fast, even when using the Quick Charge 3.0 port. Remember that Quick Charge is backwards compatible. So even if your phone doesn't support it, you can still use it for charging your device without having to worry about any damage.

For those that may not be aware of what Quick Charge 3.0 is, it's a standard that Qualcomm has developed and baked into a number of their processors, including the Snapdragon 820, 617, 652 and a few others. It allows you to charge your smartphone up to 50% in just 30 minutes – of course those numbers will depend on the size of the battery in your smartphone. It's a great way to charge or top off your battery quicker. With batteries getting larger and larger, we don't want to spend a ton of time waiting around for our smartphones to charge up, right? 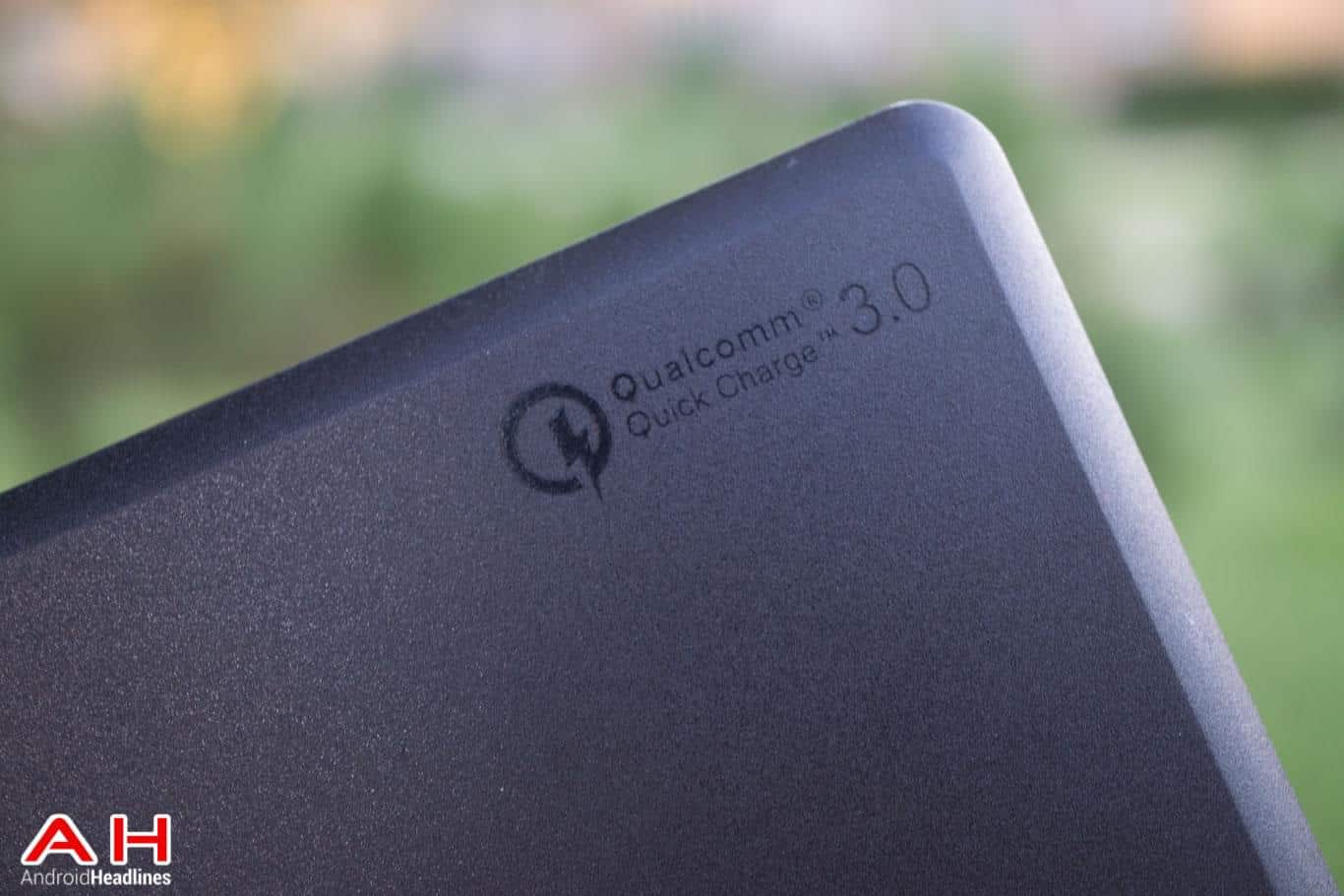 AUKEY's 30,000mAh battery pack here doesn't come cheap. It's priced at around $49 – as of this writing this review. Compared to many of the other battery packs, especially smaller ones, that's definitely not a cheap one to pick up. So the real question here is whether this battery pack is actually worth it. And that all depends on your use case, and what phone you have. If you have a Quick Charge 3.0-enabled smartphone like the HTC 10, LG G5, Nubia Z11, ZTE AXON 7, or the upcoming LG V20, then it's worth checking out. Especially if you are always traveling, as it's a nice battery pack to have in your bag and not have to search for an outlet while you're at the airport. Now if you own the Chromebook Pixel or Apple's Macbook, it makes this battery pack a no-brainer. As it means you can still use your laptop when the battery runs out, because you have this battery pack which will power it back up for a decent amount of time. But if you don't have a smartphone that uses Quick Charge 3.0, then you could probably get something different, unless you have plans to pick up a smartphone with Quick Charge 3.0 inside. 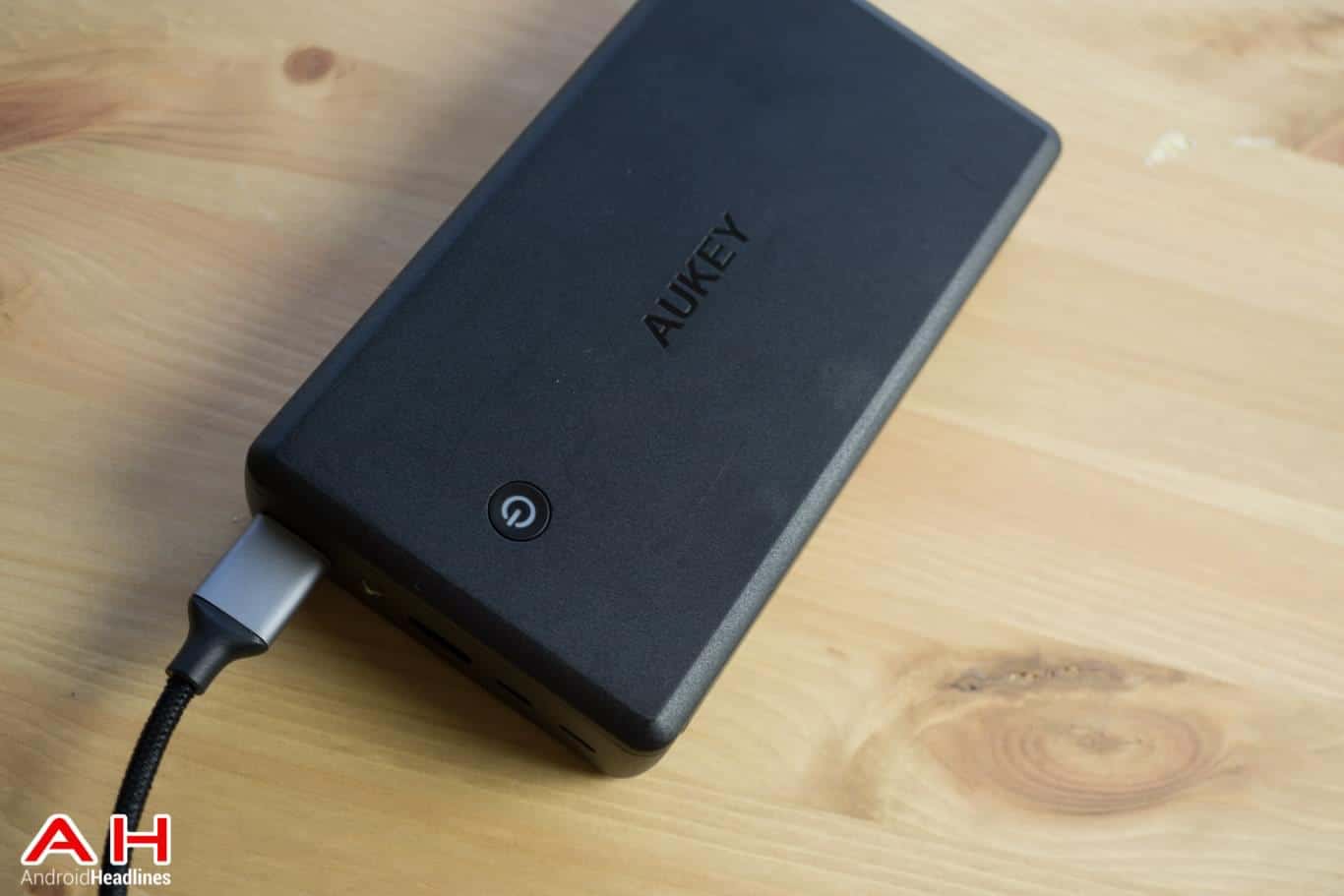 With the holiday season coming up, this battery pack is definitely going to be a great stocking stuffer. It'll give you plenty of juice to continue to use your smartphone – great for camping – even when you don't have power. AUKEY has a slew of other battery packs available as well, some with Quick Charge 3.0 technology, others featuring Quick Charge 2.0 and some without it at all. Of course, those without Quick Charge are going to be cheaper, as there's less current needed. You can pick up the AUKEY 30,000mAh Portable Battery Pack with Quick Charge 3.0 from Amazon using the link below.

Buy the AUKEY 30,000mAh Battery Pack with Quick Charge 3.0
Trusted By Millions
Independent, Expert Android News You Can Trust, Since 2010
Publishing More Android Than Anyone Else
27
Today
178
This Week
178
This Month
3344
This Year
104821
All Time
Advertisement