Pokemon GO has become somewhat of a phenomenon in the world of mobile gaming, registering over 500 million downloads since released and fueling countless stories in regards to the player base and the game world, for better or for worse. But as many Pokemon GO players should be aware of, initially the game was supposed to be released alongside a Bluetooth-powered wrist accessory called Pokemon GO Plus, which would allow players to receive notifications and interact with Pokemon and PokeStops without having to look at their smartphones. The accessory was planned for a summer release but was delayed by Nintendo in order to ensure a high-quality user experience. Fortunately, the wait is almost over as the launch of Pokemon GO Plus is just around the corner.

Yesterday, The Niantic Team has announced that Pokemon GO Plus will be released “in much of the world” next week, on September 16, for the price of $35. The Google Maps Pin-like wrist accessory connects to your smartphone via Bluetooth Low Energy and allows players to collect loot from PokeStops or catch Pokemon with just a press of a button, without having to look at or interact with the smartphone. That is, as long as the said Pokemon is already in your Pokedex. Either way, Pokemon GO Plus has one button that doubles as a notification light and in addition, it is equipped with a vibration motor for tactile notifications.

Interestingly enough, not all Pokemon GO players are excited about this new hardware addition to the game, as some players share the opinion that the accessory takes away from the gameplay by simplifying things a bit too much. Then again, there have been quite a few stories of Pokemon GO players who have forgotten about their surroundings while playing the game, and needless to say, the accessory might help some players maintain focus on their whereabouts. Otherwise, Pokemon GO players who may not want to be too obvious that they are playing the game in public could also find Pokemon GO Plus useful, and with the weather now getting colder in the Northern Hemisphere, this accessory might help in keeping the player base active in the following months. Once again, Pokemon GO Plus will be available for purchase on September 16 “in most countries”, and later this year it will also be released “in a few South American territories”. 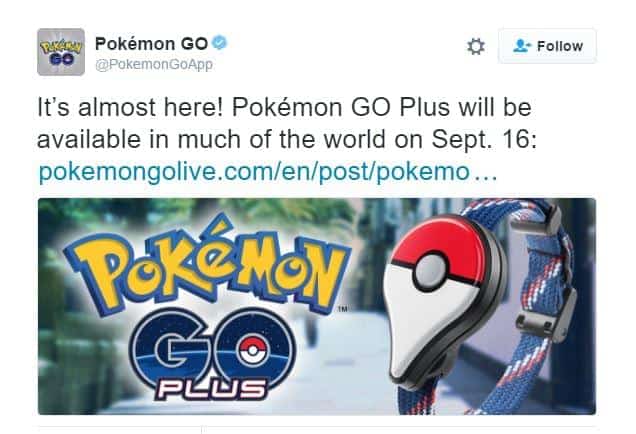