While the Samsung Galaxy Note 7 would be considered a phablet, the ASUS ZenFone 3 Ultra could fall into the tablet category with a 6.8-inch display. The Galaxy Note 7 is beautifully constructed with a full metal frame and Gorilla Glass 5 on the top and the bottom – and this is the first year it gets a dual curved display giving it a much sleeker look. The ZenFone 3 Ultra uses a new Aerospace-grade aluminum alloy body, and they hide the antenna lines on the side of the device. Both devices offer up a solid build, nice look, and great feel – although the ZenFone 3 Ultra is a bit large. Does the ZenFone 3 Ultra have what it takes to beat out the powerhouse Galaxy Note 7, or is it mostly all show and no go? Let’s look at some of the similarities between these two devices before we look at each one individually.

The Galaxy Note 7 and the ZenFone 3 Ultra have very little in common, other than the fact that they are smartphones. The sheer size of the 6.8-inch display on the ZenFone 3 Ultra makes it a physical giant compared to the Galaxy Note 7. The resolution is different, and so is the technology used on the display, where the Galaxy Note 7 uses the AMOLED versus the IPS LCD found on the ZenFone 3 Ultra. Both devices use a Snapdragon processor but different models and different Adreno GPUs. They both use 4GB of RAM, but different types and they both offer an expandable 64GB UFS storage variant. The camera areas are very different – from the primary camera to the front-facing camera (FFC.) Both use a large non-removable battery with rapid charge capabilities. They both have Hi-Res audio for listening through earphones. They have most of the usual suspects – WiFi, Bluetooth v4.2, GPS, and a USB port – Type-C reversible on the Note 7 and a microUSB v2.0 on the Ultra – for charging and data transfer. 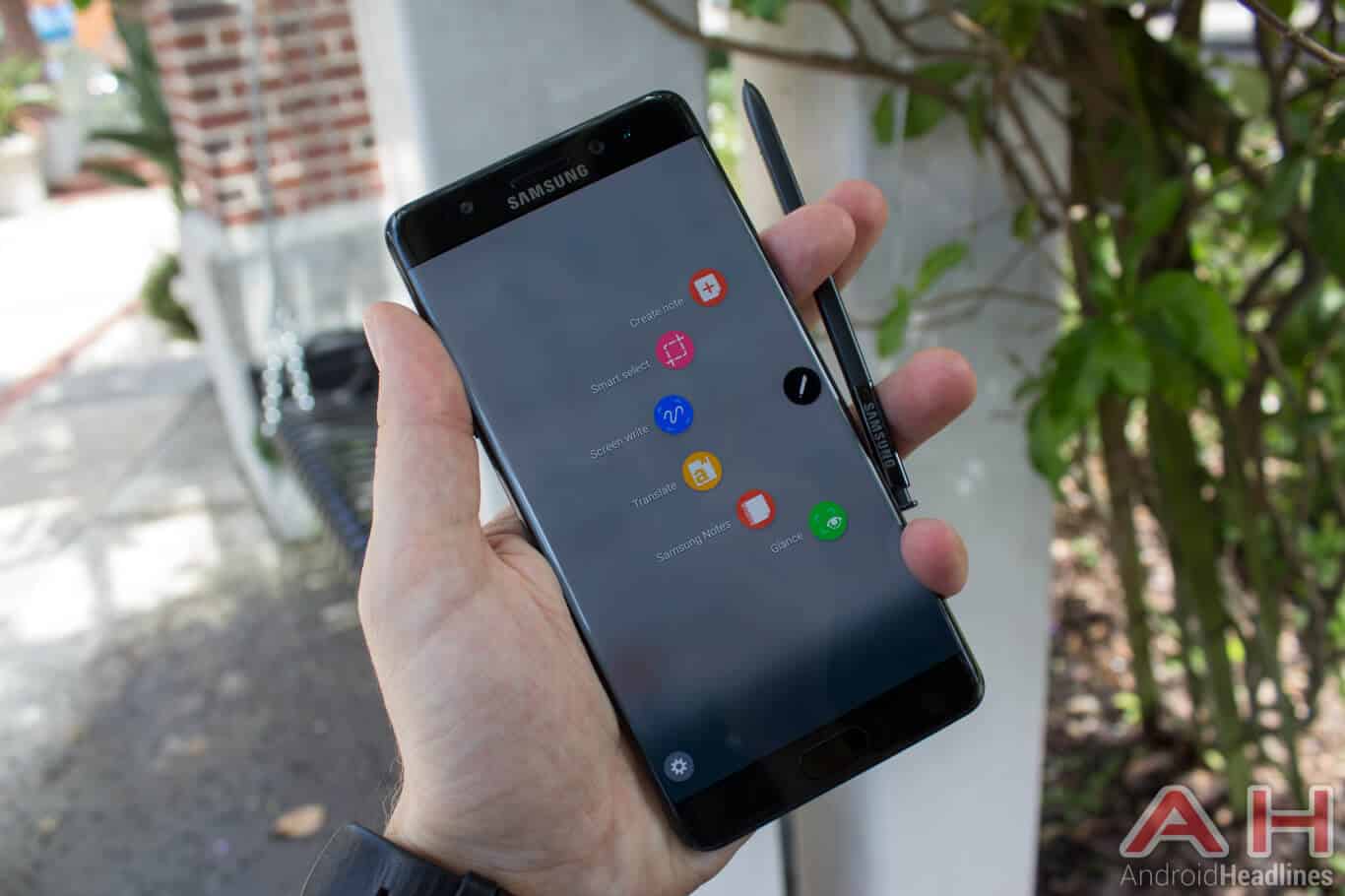 If you are familiar with the Galaxy S7 Edge, then think of the Note 7 as a stretched S7 Edge with and S Pen. Yes folks, the Samsung Galaxy Note 7 finally gets its curved display, but not quite as pronounced as the S7 Edge and not even close to the beauty of the Galaxy Note Edge. This dual curve is just enough to add some real elegance and beauty to the Note 7 – it is the best-looking Note ever.

The Galaxy Note 7 sports a 5.7-inch Super AMOLED QHD display with the addition of the dual curved edge. This setup gives the Galaxy Note 7 the resolution of 2560 x 1440 pixels and 518 pixels-per-inch (PPI.) The Galaxy Note 7’s sold in the US/Canada will pack a Snapdragon 820 quad-core processor with four cores clocked at 1.6GHz and the other four cores clocked at 2.3GHz. Other parts of the world will sport an Exynos octa-core with a quad-core clocked at 1.6GHz and a quad-core clocked at 2.3GHz. The Note 7 uses 4GB of DDR4 RAM and a base 64GB of the faster UFS 2.0 internal memory and includes the return of expansion via a microSD card.

Samsung used the same camera from the Galaxy S7 series – a new Dual Pixel 12MP sensor with an aperture of f/1.7, faster phase detection autofocus (PDAF), auto HDR, and retains OIS. For its FFC, the Galaxy Note 7 uses a 5MP wide-angle lens with a larger f/1.7 aperture and Live HDR. The Note 7 has a non-removable 3500mAh battery, and it features a quick charge feature as well as quick wireless charging capabilities.

Samsung tweaked the Galaxy Note 7 with a new Iris Scanner that allows you to unlock your device by looking into the top area of the display – it also acts as your gateway into a secret folder where you can store things for your “eyes” only. The S Pen has many new added features giving it even more functionality and sensitivity, not to mention it is waterproof and color coded to your device. The Note 7 is IP68 certified against dust and water and is the first Samsung device with the newer USB Type-C reversible connector for charging and data transfer and the first to use Gorilla Glass 5. Depending on where you buy the Galaxy Note 7, it will come in Blue Coral, Silver Titanium, Black Onyx, and Gold. It measures 153.5 x 73.9 x 7.9mm, weighs in at 169 grams, and will cost you about $865.

ASUS upped the ante in its new line of ZenFone 3 smartphones – they are a beautiful design of all-metal with the antenna lines hidden in the edges of the device. The ‘Deluxe’ model is the true flagship of the three – the ‘Ultra,’ is so named because of its large 6.8-inch display. The ZenFone 3 Ultra model with 4GB of RAM and 64GB of UFS memory is the model we will compare to the Galaxy Note 7. Let’s take a closer look at Ultra model and see how it stacks up against the Galaxy Note 7.

The ZenFone 3 Ultra falls more to the actual definition of a tablet with its massive 6.8-inch IPS LCD display and Full HD resolution of 1920 x 1080 pixels and 324 PPI. ASUS picked the mid-range 64-bit Qualcomm Snapdragon 652 octa-core processor with a quad-core clocked at 1.4GHz and a quad-core clocked at 1.8GHz and the packed in an Adreno 510 GPU to handle the graphics. It boasts 4GB of slower DDR3 RAM (a restriction of the processor) and 64GB of faster UFS 2.0 memory – like that used on the Note 7 – but is expandable to 200GB via a microSD card.

Asus spent some time improving the camera area on their new models – the Ultra model has a primary camera with a large 23MP Sony IMX318 (sensor) with an f/2.0 aperture, 6-element Largan lens, and 0.03-second TriTech Autofocus – it uses both Laser and Phase Detection Autofocus (PDAF.) ASUS even went with a 4-axis OIS for more stability and then added a dual-tone flash. The ZenFone 3 Ultra gives you an 8MP FFC with a f/2.0 aperture and 85-degree wide-angle lens for selfies and video chatting. A large, non-removable, 4600mAh battery with Quick Charge 3.0 powers the device.

The ASUS ZenFone 3 Ultra has a rear-mounted fingerprint sensor for unlocking the device and a nice pair of bottom-mounted stereo speakers. ASUS did not include NFC in the Ultra model so there will be no mobile payments – its real purpose is for entertainment. The Ultra arrives running Android 6.0.1 Marshmallow with the newest ZenUI 3.0 running over the top. The Ultra measures 186.4 x 93.9 x 6.8mm and weighs in at 233 grams. It is available in Glacier Silver, Titanium Gray, or Metallic Pink and it will cost you about $479 with 4GB of RAM and 64GB of memory.

This decision was an easy selection – there is no doubt on paper that the Galaxy Note 7 is the specification winner of this comparison and in pure design, the Galaxy Note 7 is overwhelmingly better looking with its dual curved display. It has a much better looking – but smaller – display, it has a fingerprint sensor, iris scanner, NFC, IP68 certification, much better processor/GPU, faster RAM, heart rate sensor, oxygen saturation sensor, comes with an S Pen and all of its features. All of this is served up with a price of about $850 – and only you can decide if it is worth the cost.

The ASUS ZenFone 3 Ultra is a lot of phone for its $480 price, but it is all about screen size and value. You have great camera specs, an all-metal body, dual speakers, 4GB of RAM and the same fast UFS internal memory that the Note 7 uses. It is a great device if you want to watch movies or videos on its large display.

However, if you want the best of everything and a professional grade device that can handle any of your needs, the Galaxy Note 7 is the one to choose.