Do we have a good one for you today – the battle of the LG phones with the LG G5 standing up to the new LG V20. Which one of these techno marvels will win this comparison battle as they have many things in common, yet are clearly designed with different audiences in mind? Many thought LG was crazy introducing the LG V10 last year after they released the LG G4 – but it looks as though LG had a plan after all. Both devices use an all-metal body, the same processors, offer expandable memory, and a removable battery – however, the LG G5 is clearly designed for someone that wants a modular phone…I do not know of anybody that would buy it and use it ‘as is.’ The LG V20 is designed for those that enjoy tweaking with photos and listening to great sounds. Let’s take a look to see just what these two devices have in common and then we will take a closer look at each device.

The LG V20 is the larger of the two devices – after all, it has a larger display, but they both use the IPS LCD technology and the Quad HD resolution. When it comes to the internal components, they share a Snapdragon 820 quad-core processor and an Adreno 530 GPU for outstanding graphics. They both pack 4GB of DDR4 RAM and 32GB of the faster USF 2.0 memory with the LG V20 also offering a 64GB variant – both enjoy expandable memory via a microSD card. In the camera area, both devices have dual primary cameras, but different sizes. They both have Hi-Res audio, but the LG V20 takes that to new heights – 32-bit B&O Play certified with four DACs. Both devices have a fingerprint sensor for unlocking the device and authorizing mobile payments. Batteries are removable on each device, and each offers Quick Charge 3.0. Both devices have the usual suspects – WiFi, Bluetooth v4.2, GPS, NFC, IR Blaster, and a USB Type-C reversible port for charging and data transfer.

LG deserves some credit for trying to be innovative with their modular design – it may start a new market segment as we expect our smartphones to do more – look at the Moto Z series. LG also took another bold step and switched from plastic to an all-metal design, and then painted the device to hide the antenna lines. LG was able to retain the removable battery and expandable storage – however, even with all of this, people have shown a lot of skepticism toward the LG G5. Let’s take a closer look at the new LG G5 and see just how the specs and design hold up to the new LG V20.

The LG G5 sports a 5.3-inch IPS LCD QHD display, but now includes ‘always-on’ – a feature designed to help save battery life – it functions much like the dual display on the LG V20. The QHD sports 2560 x 1440 pixels with 554 pixels-per-inch (PPI.) LG grabbed the best processor on the market for its two flagships – the 64-bit Qualcomm Snapdragon 820 quad-core processor with dual cores clocked at 1.6GHz and another at 2.15GHz. This is paired with an Adreno 530 GPU for graphics. The G5 packs 4GB of DDR4 RAM and 32GB of UFS 2.0 internal memory that is expandable to 2TB via a microUSB card.

The LG G5 starts off with the same single 16MP sensor that LG used in the G4 and then adds to it an extra 8MP wide-angle sensor for duo cameras that work independently from one another. Typical pictures use the 16MP shooter, but if the user wants to capture a wider shot in the photo, the 8MP wide-angle is used. LG kept the excellent 8MP front-facing camera (FFC) from the G4, allowing the user to take high-quality selfies and have high-quality video chatting. LG decreased the battery size to 2800mAh in the G5, and the modular design retains the ability to remove/replace the battery. The LG G5 uses Qualcomm’s Quick Charge 3.0 capabilities.

LG made the ‘chin’ of the device removable to add the modules, so it was not possible to place the fingerprint sensor at the bottom of the LG G5. LG repositioned it on the back of the phone where the on/off and volume control resided on the LG G4. The fingerprint sensor acts as an on/off switch, but the volume controls were moved to the side of the LG G5. LG did retain its IR Blaster and FM Radio on the LG G5. The LG G5 measures 149.4 x 73.9 x 7.7 mm, weighs in at 159 grams and comes in Silver, Titan, Gold, and Pink. The LG G5 is available on all the leading carriers for $625. 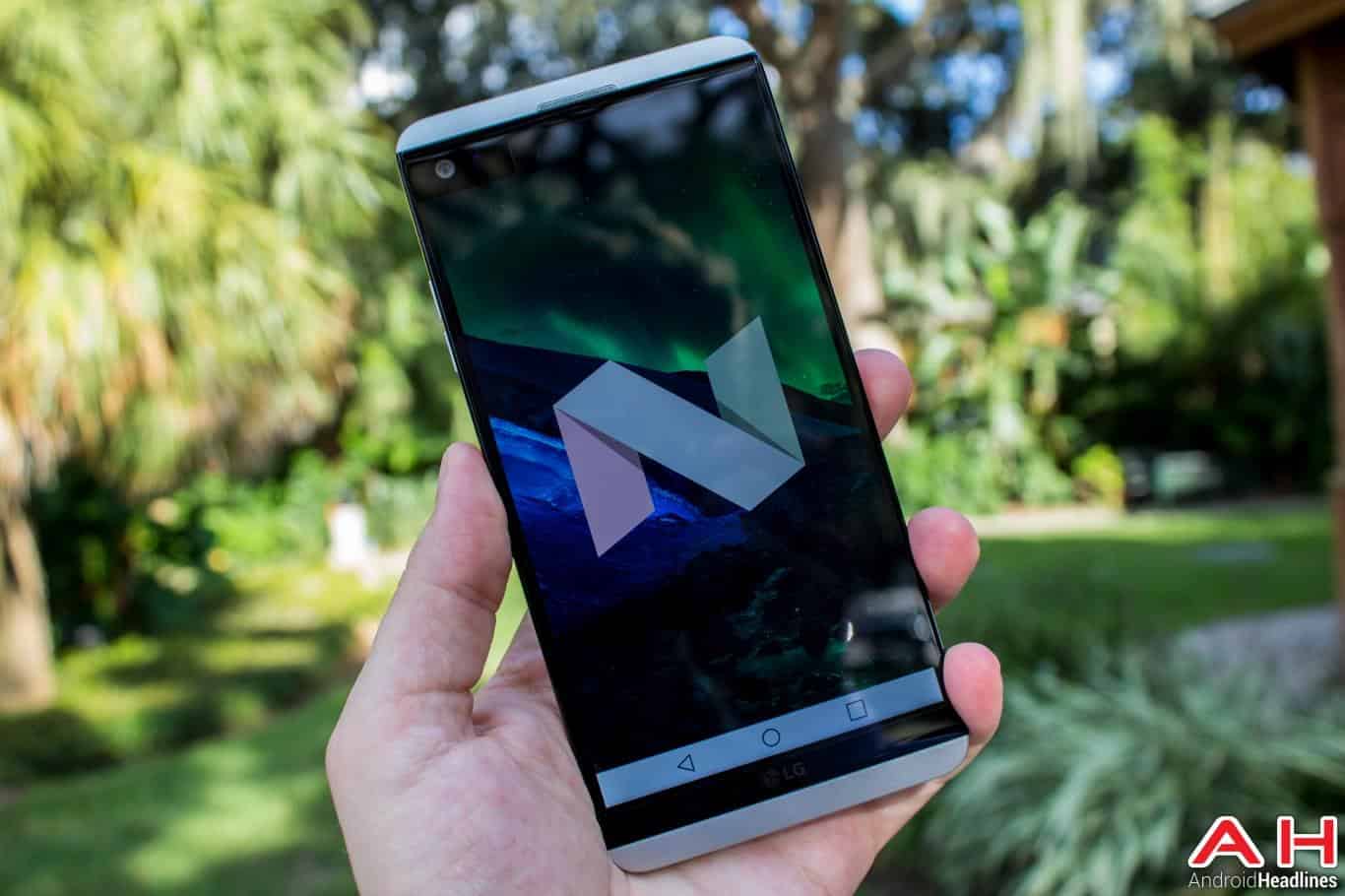 When LG released the LG V10 a year ago, many were wondering…why…with the LG G4 in its stable already as a flagship. However, with the advent of the LG G5, it seems as though LG was preparing us for this year. The new LG V20 uses a slightly different design and metal – stainless steel to aircraft quality aluminum – to achieve its good looks. A silicone ‘bumper’ was placed on the top and bottom of the device for added safety if dropped. The V20 kept the same sized 5.7-inch display and smaller secondary display over the top – and of course, the internal specs were stepped up in this model. The LG V20 is going after those interested in photography and sound. Will these improvements be enough to make the LG V20 worth its price and beat out the LG V10?

The LG V20 sports two displays – the primary IPS Quantum QHD display measures 5.7-inches with a resolution of 2560 x 1440 pixels and 513 PPI. Sitting above the main display, near the top of the device, is a 1040 x 160-pixel display that is also 513 PPI. The secondary display functions like an always-on display and is functional even when the main display is off. This year LG brightened the secondary display making it easier to see those notifications – the weather, the time/date, app shortcuts and more. This secondary display is a way to save battery life, although the always-on method seems less technical and easier way to achieve the same purpose. The LG V20 uses the best processor out there and the same one found in the LG G5 and other flagship devices – a 64-bit Qualcomm Snapdragon 820 quad-core processor with dual cores running at 1.6GHz and dual cores running at 2.15GHz. The LG V20 packs 4GB of faster DDR4 RAM and 64GB of faster UFS 2.0 internal storage with room to expand an additional 2TB.

LG decided to go with a dual primary camera on the LG V20 – the main16MP sensor is still there, but they added another 8MP wide-angle lens for those times when you need a wider view. LG then added laser and phase detection (PDAF) autofocus, a large f/1.8 aperture (f/2.4 for the 8MP), OIS and a dual-tone LED flash. Then, LG decided to go back to the single 5MP FFC with a f/1.9 aperture for selfies or video chatting – the LG V10 had dual selfie cameras. The LG V20 packs a 3200mAh removable battery that should last through the day, and Quick Charge 3.0 makes charging faster.

The LG V20 has one speaker on the bottom of the device and includes four DACs to improved sound as well as providing an excellent EQ with left/right balance controls. The LG V20 is so rugged that it is MIL-STD-810G certified against drops. It is the first device to come running the new Android 7.0 Nougat right out of the box. The V20 measures 159.7 x 78.1 x 7.6 mm and weighs in at 174 grams. The LG V20 is available in the colors Titan, Silver, and Pink. No pricing has been set, but it is expected to be around $700.

This decision is a tough one to pick – both devices have the same processor/GPU/RAM and expandable storage. The LG G5 offers modules to use, but if you are not interested in those, the LG V20 makes a lot more sense. Here we have two devices aimed at two different crowds. I like the idea of modules, but do not like the way LG implemented their use, so I am picking the LG V20 as the winner of this comparison.

The LG V20 just seems like a stronger and better built (MIL-STD-810G certified) smartphone that is already running Android 7.0 Nougat. I like the dual-display idea, the extra effort put in for great sound, larger battery, and the camera looks as if you could have a lot of fun with it (we are reviewing the LG V20 now).

I know the LG V20 will cost more money, but it seems like it is money well spent. However, if you are sold on LG’s modular system, the LG G5 should not disappoint.