Numerous flagship phones are expected to make the jump to Google’s latest version of Android OS in the coming months, but the process will be gradual and some devices will receive the Nougat treatment earlier than others. Concrete launch timeframes for new Android OS versions are a rare thing as each smartphone and variant of the same device can go through different approval processes, but either way, the good news today is that someone is already testing the Samsung Galaxy S7 Edge under Android 7.0 Nougat. The handset was spotted in the Geekbench database not long ago running the said OS version, and benchmark scores hint at more or less impactful changes in performance under the new build.

The specific Samsung Galaxy S7 Edge model tested in Geekbench is the one carrying model number “SM-G935F”, which is also known as the “global” variant, powered by Samsung’s own in-house Exynos 8890 chipset as opposed to Qualcomm’s Snapdragon 820 SoC. Needless to say, the handset ran Android 7.0 Nougat which is a clear indicator that someone, somewhere, is testing Google’s latest mobile operating system on the Samsung Galaxy Edge 7. Interestingly enough, it would appear that Android 7.0 Nougat could slightly improve performance, as the unit in question scored 2016 points in single-core tests, and 5587 points in multi-core benchmarks. In contrast, the Samsung Galaxy S7 Edge running Android 6.0.1 can score anywhere between 1000 and 1900 points in single-core benchmarks, and 4300-to-5300 points in multi-core tests.

The question now is what does this imply for Samsung Galaxy S7 Edge owners eager to get a hold of Google's latest OS version? Well, for now, what we can be sure of is that Android 7 Nougat will eventually be launched on the said device and that it could possibly provide a slight increase in performance or at least in synthetic benchmarks. However, as far as the update’s release goes, it may take a few more months before it will be officially launched on all Samsung Galaxy S7 Edge variants. The unlocked version will most likely have priority as per the usual carrier variants will be subjected to further testing running the new OS before network operators will release the update OTA (over-the-air). 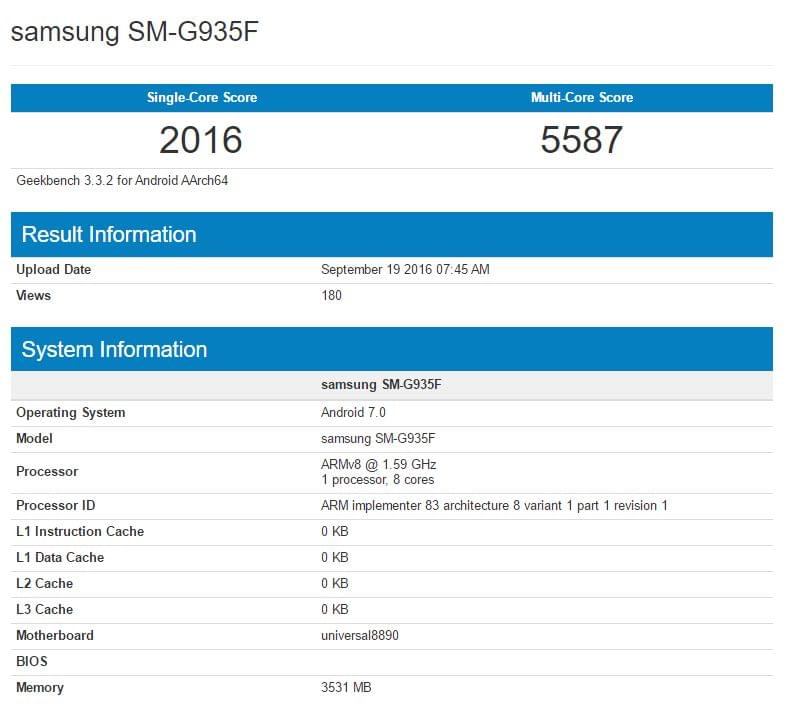