Although Huawei's Mate 9 is not yet official, a new image has leaked which states the device will be powered by a Kirin 960 processor and that it will come with dual 20MP cameras. The leak, which appears to be a teaser from Huawei shows off the phone from the front and the back at a slight angle. The device in the teaser also looks just like the device that was recently shown off in renders, which show the dual camera setup on the back with an LED flash and what is likely a laser autofocus sensor on the left and right sides, with a fingerprint sensor below it. The difference between the renders and the teaser is that the teaser shows the LED flash within the camera bar under both camera sensors, instead of the on the side, and it doesn't look like there is a laser autofocus sensor.

A more recent rumor surrounding the Huawei Mate 9 suggests that the phone will come with lenses that are made by Leica, similar to the way that Huawei worked with Leica on the P9 and the P9 Plus. While the Mate 9 in this teaser does have two camera sensors on the back, it doesn't mention any detail about who made the lenses, so there is still no actual confirmation that Huawei will be working with Leica on this device.

Although it's not crystal clear, the image is large enough to make out that the front-facing camera will be on the right side of the earpiece, and it also seems that the power button and volume rocker will sit on the right side as well. Like past Huawei devices, the Huawei brand and Huawei logo will be present on the front and on the back respectively. The Mate 9 also appears to have some pretty slim bezels, and it's rumored to come with a display size of around 5.7-inches, with a Quad HD or Full HD resolution, 4GB of RAM, and more than one option for internal storage sizes. It's also likely to come with Android 7.0 Nougat although it's possible that it could ship with Marshmallow as well. While the teaser shows the Mate 9 clad in a Gold color, Huawei will also likely release multiple color choices for consumers. 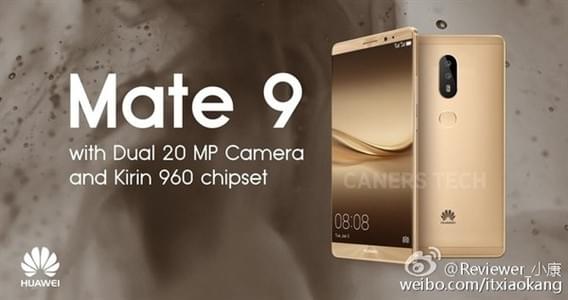