HipChat is a cross-platform group messaging solution which aims at providing collaboration between co-workers, teammates, and friends working on a same project or campaign. Unlike traditional messaging apps, HipChat is designed with group communication in mind, and it’s quite popular among developers who often rely on team collaboration for their development projects. Today, Atlassian – creator of HipChat – has announced that in collaboration with Google, its app, HipChat, is bringing some neat integrations between Google apps that will improve the user experience and save the time of its users. The integration with Google Apps come due to users who were demanding such feature to better manage time and an easier way to access their files, for a long time.

HipChat has added integration between two popular Google Apps, Google Drive, and Calendar. Users of HipChat can now use Google Calendar and Drive directly within the app rather than individually opening or switching between them. The idea behind this integration is to mitigate the time users waste by opening these apps separately and jumping between them. Talking about the Calendar integration, a user can now view multiple calendars, dates and schedules and share them with their mates. Also, these calendars can be customized per group basis, meaning, if the user is working on two different projects, on the opening of each project, the user will be shown with events and schedules of that specific project,making it easier to understand activities of different projects. This integration is built with the help of the Google Calendar API which offers greater efficiency and improved performance. Another integration is Google Drive, which makes it easier to access and share Google Drive files such as documents, presentations and other work related files directly from the app, without a need to visit the Google Drive site.

HipChat has been giving stiff competition to its rival, Slack, by introducing new features and services lately. Just a few weeks ago, it added its own video conference service, which previously required 3rd party services such as Google Hangouts, BlueJeans, and HYFY. These Google Apps integrations are now available for users on web and desktop clients; sadly, the company doesn’t reveal whether this feature will be made available to its Android app in the future. 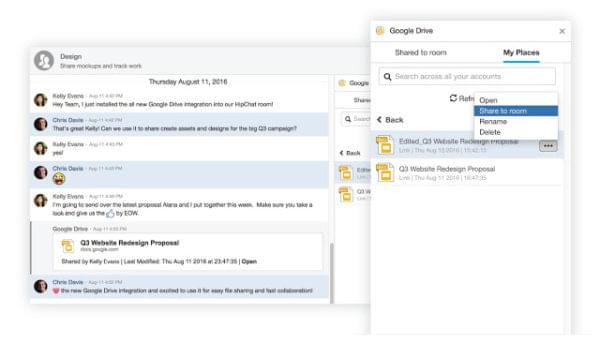 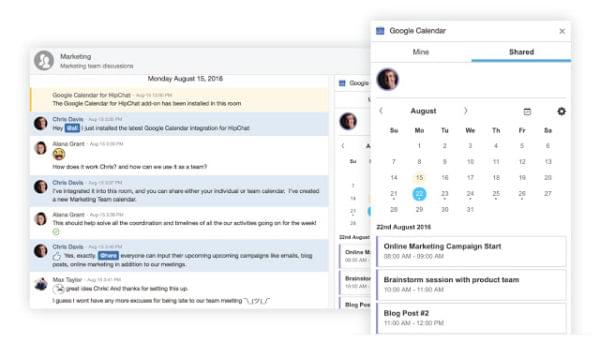