After activating its FASTER undersea fiber optic cable back in June, Google has just gone and activated another undersea cable which goes from Japan to Taiwan. The company, which over the past year has expanded and upgraded its data centers in both Taiwan and Singapore, hopes the new undersea cable will boost speeds for its various services to deliver a faster and more enjoyable experience to users in the region.

The new undersea cable that the company has built connects Google’s larger Taiwan data center with Japan, which itself is also connected to the United States via another undersea cable that was developed by the FASTER Consortium with an investment of $300 million and is actually the world’s fastest fiber optic undersea cable, with speeds of up to 60 terabits per second. The addition of the new undersea cable, though, will allow the rest of Asia to take advantage of the high-speed connections Japan and the US currently have. The cable is so fast in fact, that Google has said that the cable supports speeds of up to 26 terabits per second, which it says is the equivalent of every person in Taiwan sending a selfie over to Japan every 15 seconds.

The creation of this high-speed connection shouldn’t come as much of a surprise, though, due to the huge amount of people who come online each day, as well as the large amount of people who live in Asia but are yet to come online. The company has stated that it hopes the new cable will help the company’s products and services load up quicker across the region as a whole and has been sure to build the cable outside of tsunami zones in order to improve the reliability and consistency of this new connection as well as to avoid any kind of outages related to these natural disasters. Although the cable is now up and running, the company has warned that the changes may not be noticeable straight away, due to the fact that the new cable will be gradually connected to data centers, and therefore access to the higher speeds will slowly spread across the Asian continent. 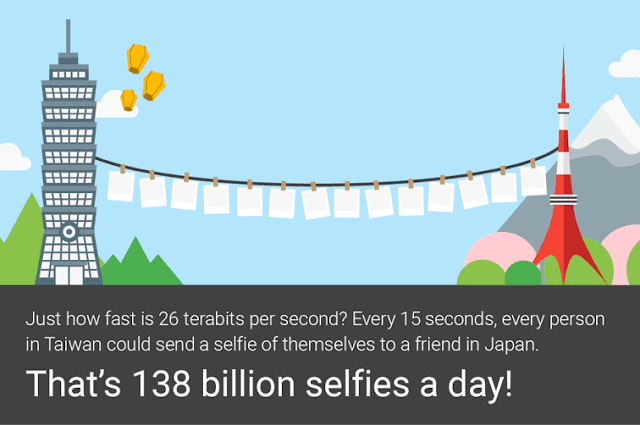