In what has to be one of the biggest – and perhaps the quickest, as well – recalls in the age of the smartphone, Samsung’s Galaxy Note 7 was yanked from shelves before it really hit its stride. Taken off of said shelves due to the fact that the batteries inside of them were overheating and exploding, dealing damage to people and property alike, you’d imagine that users would be more than happy to get rid of their devices as soon as possible. Well, according to new information from apteligent, that doesn’t appear to be the case.

For whatever reason, the adoption rates that apteligent has noted for the Galaxy Note 7 seemed to stall around the time of the recall, but they didn’t plummet or stop altogether. In fact, in roughly a week or so, the adoption rate for the Galaxy Note 7 was back to levels that match up with those around the time of the recall. This is pretty unusual, but there’s probably a good reason that people have not been willing to turn in their devices. Not only do Samsung not seem to have any replacement stock available right now, but the devices that Samsung and carriers have been handing out to tide people over aren’t exactly in the same league as each other. Of course, there will also be those out there that see the recall as some sort of formality, rather than a serious risk to their health, which it certainly is. If the reports of devices exploding and causing damage aren’t warning enough, Samsung is trying their best to get people to turn in their phones. Their latest is to limit the amount of battery in a Galaxy Note 7 to just 60 percent, hoping that this will prevent the device from getting too hot from charging, as well as persuading users to turn in their defective devices.

As per the graph from apteligent below, the adoption rate fell, then rose around the time of the recall and has since done the same thing, but levels of use recorded by the firm have been consistent with those prior to the recall. It goes without saying, but if you have a Galaxy Note 7, you should turn in your phone and await a safe replacement. 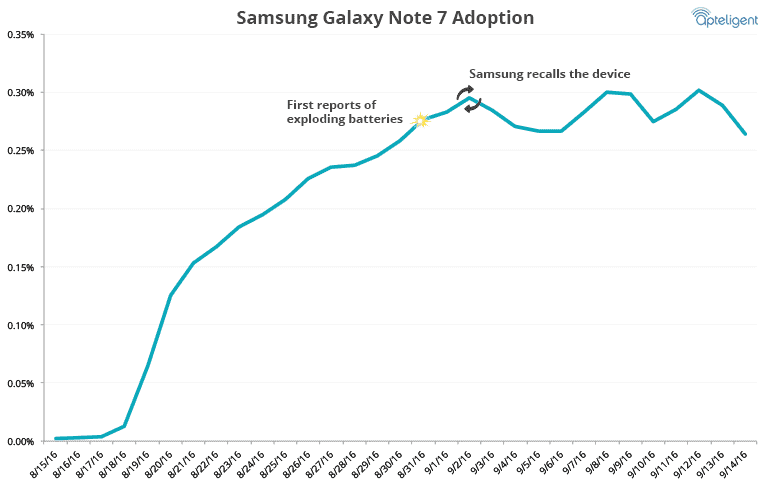