ASUS’ ZenFone 2 line of devices was quite successful last year. The company had introduced quite a few ZenFone 2 devices throughout 2015, and ASUS had managed to sell 20 million ZenFone 2 devices last year. The ZenFone 3 arrived later than expected, ASUS introduced three ZenFone 3 devices back in May, the ZenFone 3, ZenFone 3 Ultra and ZenFone 3 Deluxe. The ZenFone 3 Deluxe is the most powerful out of the three, as it sports a 5.7-inch fullHD display, 6GB of RAM and 64GB / 128GB / 256GB of internal storage, while it is fueled by the Snapdragon 820 64-bit octa-core SoC.

That being said, ASUS did introduce an even more powerful variant of the ZenFone 3 Deluxe in July, a Snapdragon 821-powered model. That variant of the device was not immediately available for sale, and we were wondering when will ASUS make it available. Well, that has just happened, the Snapdragon 821-powered ZenFone 3 Deluxe model is available for purchase in ASUS’ homeland, Taiwan. ASUS said that this handset will become available in Taiwan and Hong Kong in early August, but that did not happen, it arrived approximately one month later, as you can see. ASUS basically trumped both Xiaomi and LeEco to make the ZenFone 3 Deluxe the first Snapdragon 821 handset available out there. As a reminder, Xiaomi is expected to introduce the Snapdragon 821-powered Mi Note 2 flagship phablet soon, while LeEco is, allegedly, preparing the LeEco Pro 3 which will be fueled by that very same SoC. This variant of the ZenFone 3 Deluxe is priced at NT$24,990 (Taiwanese Dollars), which translates to $798. The phone is available in Glacier Silver and Shimmer Gold color variants, the first color model will start shipping on September 12th, while the second one will follow by September 23rd. We still don’t know when will this smartphone become available outside of Taiwan.

The most powerful ZenFone 3 Deluxe model, the one we’re talking about here, comes with a 5.7-inch fullHD Super AMOLED display, 6GB of RAM and 256GB of native storage. The device is fueled by the Snapdragon 821 64-bit quad-core processor, while the phone also ships with a 3,000mAh battery. The 23-megapixel main OIS camera (Sony’s IMX318 sensor) is placed on the back of the phone, while Android 6.0.1 Marshmallow comes out of the box here. 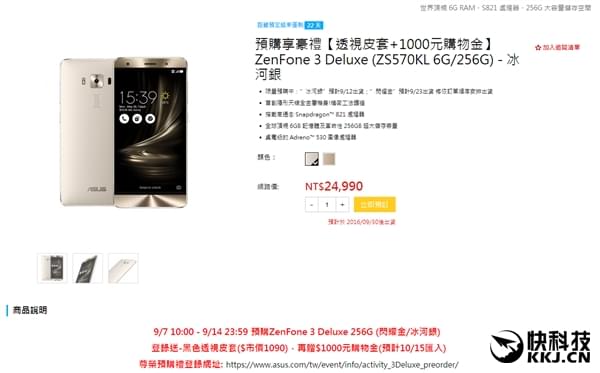