Smartphone cameras as a whole have evolved to a point where it has become difficult to tell the difference between most flagship phones in every day situations.  It isn’t until you dial down to the details and nitpick that you start to see the differences, and with this LG has taken a decidedly different path in its execution with the cameras on the LG V20.  Much like last year’s V10 and this year’s G5, LG’s reliance on wide-angle lenses and advanced software has become a core part of its business strategy and a key way to differentiate its phones from the pack of clones out there.  On the back of the phone you’ll find a 16-megapixel sensor with a 78-degree f/1.8 lens right next to an 8-megapixel sensor with 135-degree f/2.4 lens in a symmetrical pattern.  On the front sits a pair of 5-megapixel cameras, one with an 83-degree f/1.9 lens and the other with a 120-degree f/1.9 lens.

If you’ve used any LG phone in the past few years you’ll be immediately familiar with the interface at large.  Featuring prominent shutter and recording buttons in the right, starting a video or taking a picture from the moment that the camera opens only takes as long as it takes to move your finger.  Modes are well labeled on the left side, and switching between auto, manual photo and manual video modes is a single button press away.  From here a sub menu of icons appears, and this is the only place where the software tends to be a bit confusing.  These icons are generally well designed, but having labels under them would really help further their usefulness.  Speed of the software is nice and quick though, and startup times range under 2 seconds from the moment you call for it to boot until the moment you can take a picture. This snappy experience continues right into the focus time and accuracy, in which LG is now utilizing a triple hybrid autofocus system to ensure accuracy and lightning fast speeds.  This dual-phase system starts with a laser autofocus that takes 0.276 of a second to find a target, while the phase detection autofocus analyzes the change in pixels to help narrow down moving objects.  Once this is done the camera then micro-focuses using contrast-based autofocus to get the sharpest image possible.  In practice this is lightning fast and takes well under half of one second total to grab the subject, and I found in our hands on time this seemed to focus on the right object every time.

Quality was just as good as the focusing method too, and that proved even more so in the challenging location our hands on was located.  In a basement of a New York City skyscraper the sparsely lit tables and bookshelves made a pretty perfect test of the most grueling conditions for any smartphone; low light.  It’s these low light conditions where manufacturers have spent the bulk of their R&D dollars in recent years, and it has definitely paid off in the LG V20’s case.  The only time I found a shot that was a tad blurry was when forcing HDR in a situation that didn’t call for it.  When leaving the HDR on automatic the pictures all came out incredibly crisp, clean and balanced.  Distance detail on the 16-megapixel rear shooter is nothing short of fantastic, and zooming in to read the titles on the bookshelves from a few feet away was easy and clear. 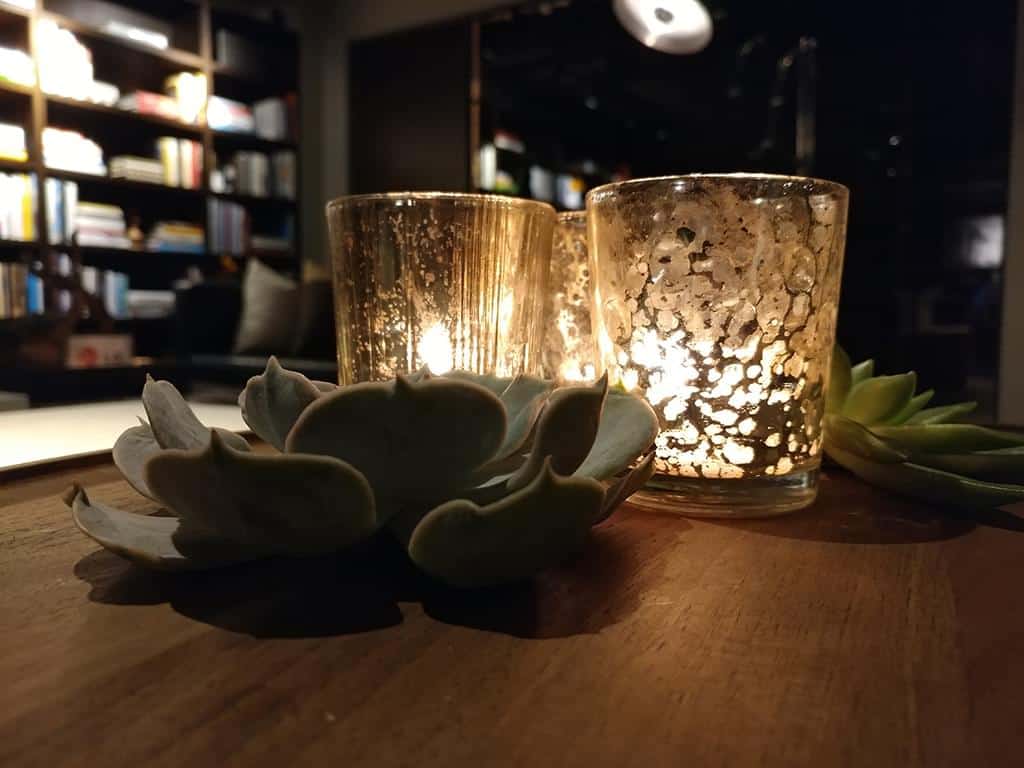 The 135-degree wide-angle 8-megapixel camera on the back isn’t quite as detailed or crisp, as was the case on the G5 earlier this year as well, but overall it seems to still be very well balanced and picks up plenty of light too.  The front-facing cameras could definitely use a resolution boost, but their overall balance and clarity are pretty top notch, and that 120-degree wide angle lens definitely does the job of getting everyone and everything around you in the shot.  Video mode is one of the biggest selling points on the LG V20 though, and with that comes the brand new Steady Record 2.0 mode.  By using both optic and digital stabilization via a system of aligning objects to a grid, video from the V20 should be nothing short of excellent.

It seems that in this particular environment the regular angle lens on the 16-megapixel sensor had some difficulty adjusting the bounce in my step when walking through the room, but the wide-angle lens video in general was much more clear and stable.  For note this is 4K optic and digital stabilized video, and you can even switch between lens types on the fly while recording.  Just like the G5 there is a bit of a delay when it comes to moving between sensors, but it’s a great feature nonetheless.  Even that new video filter mode is super cool, giving users 8 different types of “film” to record with, each having a different effect on colors and contrast.  Overall the V20’s camera seems like a real winner, and we can’t wait to spend more time with it in different lighting conditions and scenarios.  For now though it seems to have passed the test in a dimly lit room and with action, and we expect it to seriously shine in more regular lighting conditions too.  See the album below for all the pictures we took with the V20, and check out our camera hands-on video to see the videos we took as well! 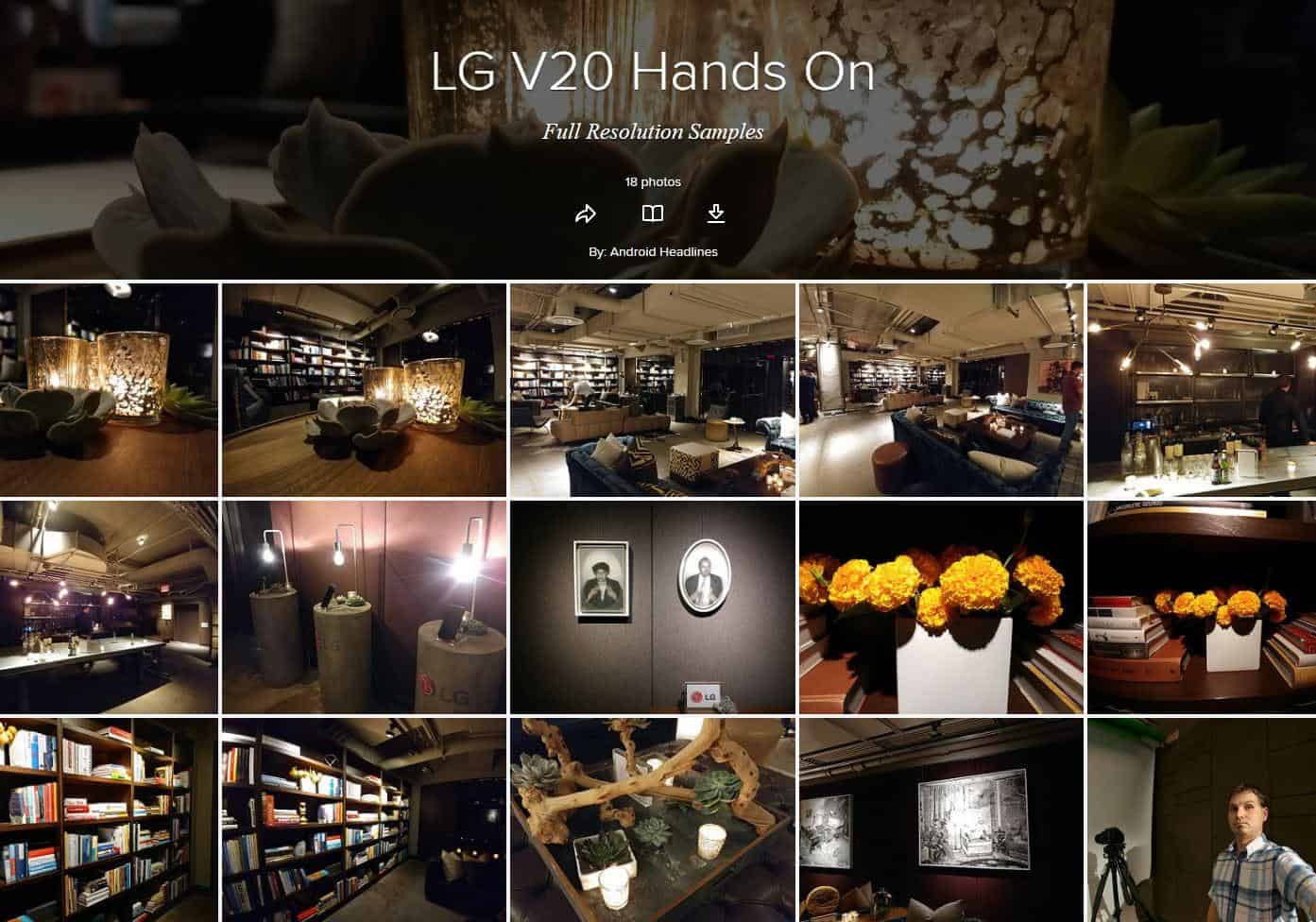