Samsung’s Galaxy A series have been largely praised for its premium look, full metal, glass body and competitive hardware. The original Galaxy A8 was launched back in July 2015 and proved to be a successful device in the upper mid-range segment. And now it looks like Samsung is preparing for an upgrade for the Galaxy A8. Though no details have been given by Samsung yet, a recent listing on the benchmarking site Geekbench has confirmed that the company is working on the device and thankfully we have some other insight on this device as well.

Earlier this month, the Galaxy A8 got listed on the Geekbench database as model name: Samsung SM-A810F. And from what we can see from this listing is that this time the Galaxy A8 will be powered by Samsung’s own chipset Exynos — the Galaxy A8 (2015) was sporting a Snapdragon 615 SoC, and the device will sport 3 GB of RAM and will come running on Android 6.0.1 Marshmallow out-of-the-box. Though Geekbench doesn’t reveal much of the other hardware details, last month, the Galaxy A8 was also found listed on the database of GFXbench as well, revealing most of the specifications of this upcoming device. According to GFXbench listing, the Galaxy A8 will feature a 5.1-inch Full HD Super AMOLED display with a resolution of 1920 × 1080, it will be powered by an Exynos 7420 Octa-core processor, which is made of 4x Cortex-A57 cores – running at 2.1 GHz frequency to handle intense tasks and 4x Cortex-A53 cores running at 1.5 GHz clock speed for lightweight tasks, and ARM Mali-T760 MP8 GPU. The camera on the Galaxy A8 will be a 16-megapixel shooter with flash and autofocus while the front camera will be a 5-megapixel sensor. On the storage side, the device sports a 32 GB of onboard storage. While there are no details on the capacity of the battery.

The Galaxy A8 is expected to announce soon as just recently device has passed the Bluetooth certification, which is an indicator that device is getting ready for the launch. There are no details about how much this device will cost, but according to a listing shown on the import-export site, Zuaba, the device will be priced at roughly $205. But till then, all we can do is to wait for an official announcement from Samsung. 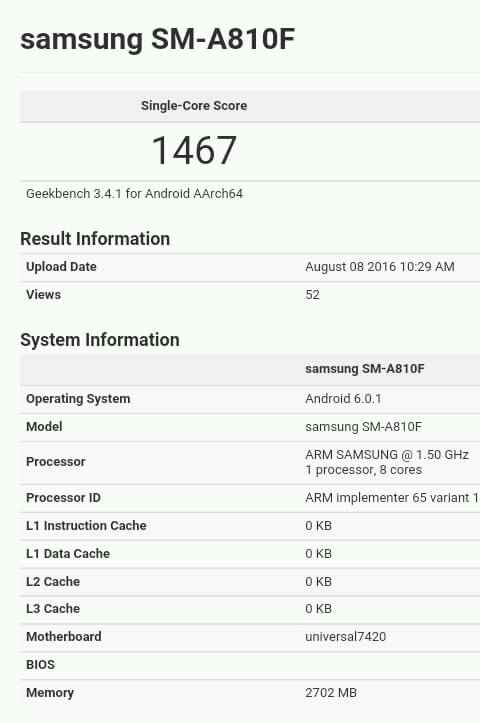