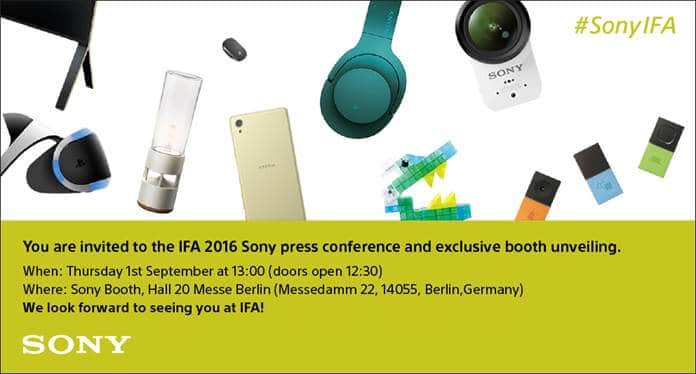 It's that time of year once again, as the Summer winds down and we begin to head into the Fall, which means that there's another trade show just around the corner. We've had the Consumer Electronics Show, otherwise known as CES back in January, Mobile World Congress took over Barcelona for a week this March, and now it's time for IFA, which takes over Berlin, in Germany, for the first week of September. While Samsung has, for the past two years now, given the big show a miss by releasing the Galaxy Note series in August, instead of at IFA every year, that doesn't mean the show is any less interesting. Sony uses both MWC and IFA to release new devices and make new announcements and IFA 2016 doesn't seem as though it's going to be an exception to this rule.

As per the invitation to Sony's IFA 2016 event, to be held September 1st at 13:00 local time (which is 07:00 EST and 04:00 PST) it seems as though Sony is to announce a new smartphone. Or at least, that's what it looks like given the Xperia smartphone in the above picture, as well as the recent leaks of the "Xperia XR" which has also been spotted with the model number of F8331. Whether or not this Xperia XR is to be the follow up to the Xperia X Performance is unclear, but given the rumored specs, it's unlikely. So far, we have seen a device with either a 5.1-inch or 5.3-inch Full HD display, a 23-megapixel rear-facing camera as well as a Snapdragon 820 and 3GB of RAM running the show. If these specs come true, it could either be a follow-up to the Xperia X Performance or a device to stand aside it on shelves, which could be confusing for some customers.

For Sony however, the release of the Xperia XR could be more about updating the Xperia line with a new, more rounded design as well as USB Type-C, which we have yet to see on a smartphone from Sony. Regardless, the release of a flagship-class device from Sony in the first half of the year, and then again in the second half of the year is often the way that Sony does things, so this shouldn't come as much of a surprise.