Growth in the global smartphone market may be slowing down in recent times, but smartphone sales in India is still growing at a rapid rate. Analysts and industry insiders expect that growth to continue in the foreseeable future, which is why so many Chinese brands have been rushing in to set up shop in the country over the past couple of years or so. According to the latest report from IDC, handset sales in the country have bounced back from a couple of quarters of sequential decline after promotions and discounts during the last holiday season ensured massive sales during Q4, 2015.

As per IDC’s ‘Quarterly Mobile Phone Tracker’, as many as 27.5 million smartphones were sold in the country during Q2, 2016. That represents a growth of 17.1% over the same period last year, and a 3.7% increase over the previous quarter in sequential terms. The one interesting point to note here is the phenomenal growth of Chinese vendors, even as most of the other international brands in the market struggled to latch on to their customers. Indian companies, too, lost market share, unable to compete with the value proposition posed by the likes of Xiaomi, Meizu and OnePlus on the one hand, while on the other, not willing to offer the inordinately high retailer margins that have allowed brands like OPPO and Gionee to gain substantial market share in the country of late.

That being the case, overall shipments by China-based vendors such as Xiaomi, OPPO, Vivo and Gionee grew by a whopping 75% on a Year-on-Year basis, with all of those brands managing to ship over a million units each during the quarter. Lenovo was the only China-based vendor that had previously managed to do that, with its A6000, A6000 Plus and K3 Note doing rather well in the country last year. Meanwhile, even as the growth of Chinese vendors continued unabated, Samsung continued its dominance of the smartphone scene in the country with a market share of 25.1%, growing 15% YoY over Q2, 2015. Micromax, the largest of the Indian vendors with 19.9% share of the country’s smartphone market, also did well, registering a growth of 2% on the back of new product launches. 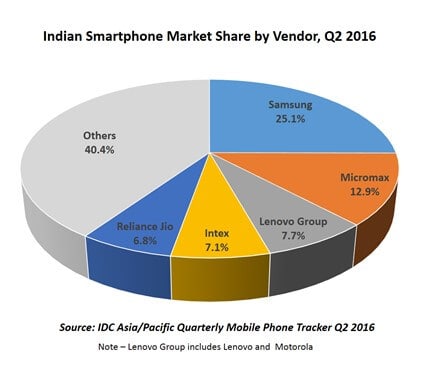