Samsung uses Qualcomm’s Snapdragon processors in many of its smartphone models at different segments of the market, although, its own Exynos chips are some of the best in the business. The South Korean company designs and manufactures its Exynos SoCs in-house, and even though an overwhelming majority of devices running on these chips come from Samsung itself, there are a few non-Samsung devices that too, have been powered by Exynos chips over the years. The company’s latest top-shelf SoC happens to be the Exynos 8890, which can be found in the international variants of the Galaxy Note 7 that will be shipped to places like Europe and India.

The post claims that Samsung is currently testing its next-generation chips at these astounding clock speeds, although, for reasons ranging from thermal management to power consumption, the company will, most likely, tone things down a notch in the final commercial versions of the chips. Either way, it will still be interesting to see how the Exynos 8895 shapes up against the Snapdragon 830. Meanwhile, one interesting thing pointed out by the source on Weibo, is that even at 4GHz, the upcoming Exynos chip apparently is just as power efficient as Qualcomm’s upcoming Snapdragon 830 at 3.6GHz. That would certainly be exciting news for many around the world, but it is important to remember that these are very early rumors which have not been corroborated by other reliable sources, nor have they been independently verified by any reputable media organization. That being the case, a generous helping of salt may well be in order. 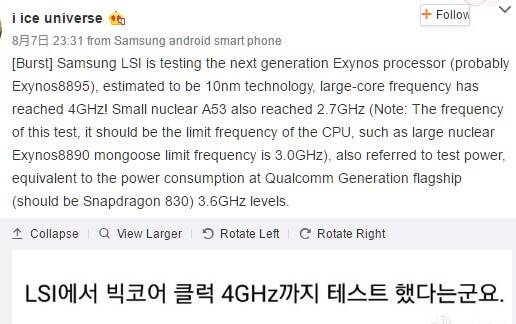