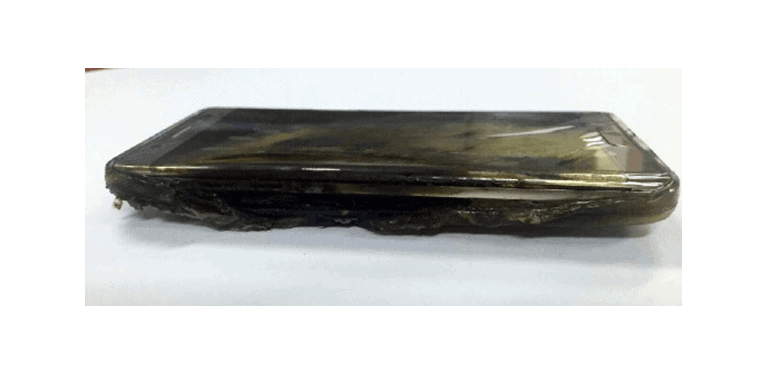 The Samsung Galaxy Note 7 was released less than a month ago, and the company behind it, Samsung Electronics has been making brisk sale of its latest flagship device, even to the point where manufacturing of the device can’t keep up with the demand for it. Things has been pretty good for Samsung when it comes to their Galaxy Note 7 flagship, but that might change as another report of a Galaxy Note 7 exploding while being charged has surfaced. This is not the first case as something similar occurred just last week. If this trend continues, exploding Galaxy Note 7’s may cause damage to property or even result in injuries sustained by owners.

This time round, the case first emerged on Kakao Story, which happens to be South Korea’s most famous social media platform. The user who posted the image on Kakao Story has said that his friend’s Galaxy Note 7 exploded while it was being charged and that a Samsung employee has already checked out the site it occurred. Samsung is currently in talks with the owner of the device to sort out the compensation. However, the post containing the image has since been deleted from Kakao Story. Images of the aftermath show a burnt Galaxy Note 7, with the left hand side of the device severely damaged. The device is almost unrecognizable as it has expanded and has been burnt really badly. In a previous case, a user on Ppomppu, an online community website, posted a picture of a burnt Galaxy Note 7. The user mentioned that her boyfriend was charging his Galaxy Note 7 at night. The explosion and the smell of the burning smartphone woke her up. There have been people on the Internet who have claimed that the images of the most recent case and the one which occurred last week, look exactly the same.

There has been no official statement from Samsung itself regarding the two cases but reports have mentioned that the company is currently trying to verify the facts surrounding the cases. With possibly millions of Galaxy Note 7 devices having been shipped out to customers, this might become a major issue if there is a rise in similar cases. For now, it is best for owners of the device to only charge it with the official charger which comes in the retail packaging.