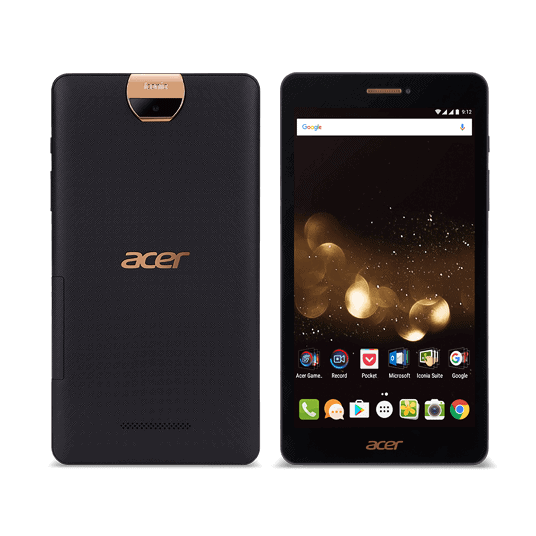 Acer is one of the largest Chinese tech companies, but it’s certainly not one of the largest smartphone Chinese smartphone manufacturers, that’s for sure. The company did introduce several Android-powered smartphones this year, but none of them are actually overly popular, nor high-end. Acer is still one of the main players in the laptop department though, much like Dell and Asus, Acer tends to release quite a few laptops a year. In any case, this company has just ‘introduced’ a new tablet it seems, which is not something we see that often lately, read on.

Now, the word introduce is in quotation marks because this tablet was not officially announced yet, but the company did open up a product page for it, which makes it official. Acer will, almost certainly, going to officially announce this device, the Iconia Talk S, during this year’s IFA in Berlin which kicks off on September 2nd. Now, this tablet is made out of plastic it seems (for the most part), and it looks really interesting in this Black and Copper combination. We don’t have all the specs just yet, but we do know that his tablet will sport a SIM card tray which will house two SIM cards actually, hence its name. The device will offer 4G LTE connectivity as well, in case you’d like to use this device as a phone, and Microsoft’s Office suite will come pre-installed on it. The display up front will be 7 inches in diagonal, and we’re looking at an IPS panel here. The 13-megapixel shooter will be placed on the back of the Acer Iconia Talk S, and the company will also pre-install a couple of their apps on its, which was to be expected considering you won’t get stock Android here.

The power / lock physical home button will be placed on the right side of this tablet, and below it, you’ll notice the volume rocker keys. The camera design on the back is quite interesting as well, and you’ll notice that Acer’s branding is placed on the back of this tablet, as well as the front. The device is expected to ship with MediaTek’s MT8735 quad-core SoC running at 1.3GHz, 2GB of RAM and 16GB of expandable internal storage. Android 6.0 Marshmallow will come pre-installed here, and a 2-megapixel shooter will be available up front. We’ll have to wait for the official announcement for more information, so stay tuned for that.