Whether you enjoy playing the game or not, Pokemon GO is a global phenomenon that has taken the mobile world by storm. It brings people together in public areas, it promotes socializing with fellow Pokemon GO players in the real world, and it offers great opportunities for smaller and larger businesses to improve their income or promote their products. There have also been quite a few sad and unusual stories surrounding the Pokemon GO phenomenon, which might prove a point that the game is indeed popular and powerful enough to appeal to all age groups and various mindsets. In fact, according to App Annie, Pokemon GO has become the most popular game among iPhone users in the US across all demographic segments (13-24; 25-44; 45+). More so, for age group 13-24, Pokemon GO is among the top 20 applications in the US, surpassing apps such as Pandora Radio and Spotify. Pokemon GO is already a top grossing game in the Play Store, which is quite a feat when given the fact that the game has yet to hit the market in all regions across the globe, and is still missing in South Korea, India, and China.

Considering all of the above and the fact that the Pokemon GO marketing machine is bound to expand as time goes by and include more sponsored locations besides McDonald's PokeGyms in Japan, App Annie's Vice President of Marketing & Communications, Fabien-Pierre Nicolas, says that "So far, the game is on pace to exceed our $1 billion prediction from early July and surpass any previous mobile game yearly revenues." Moreover, at the current rate the game can potentially exceed worldwide box-office numbers for this year's highest-grossing film "Captain America: Civil War". Fabien-Pierre Nicolas also added that "If console mega-hits like Call of Duty or Grand Theft Auto can achieve $500 million in a few days, mobile games like Pokemon GO can top the charts for three-plus years." He then listed a handful of examples including Clash of Clans, Candy Crush Saga, and Puzzle & Dragon, all of which have already been surpassed by Pokemon GO in the Top Grossing Games category in the Play Store. 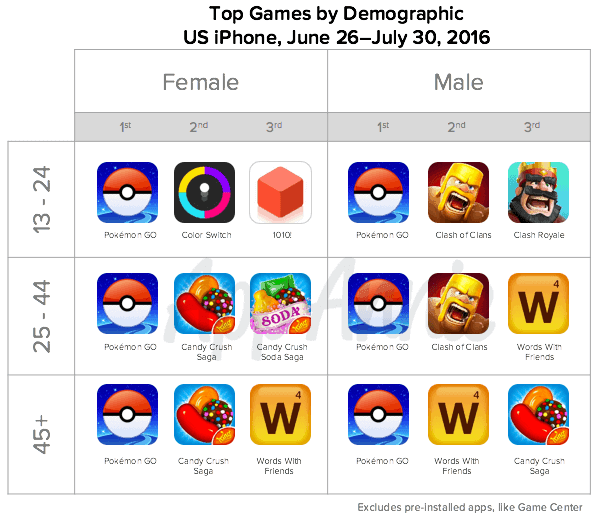