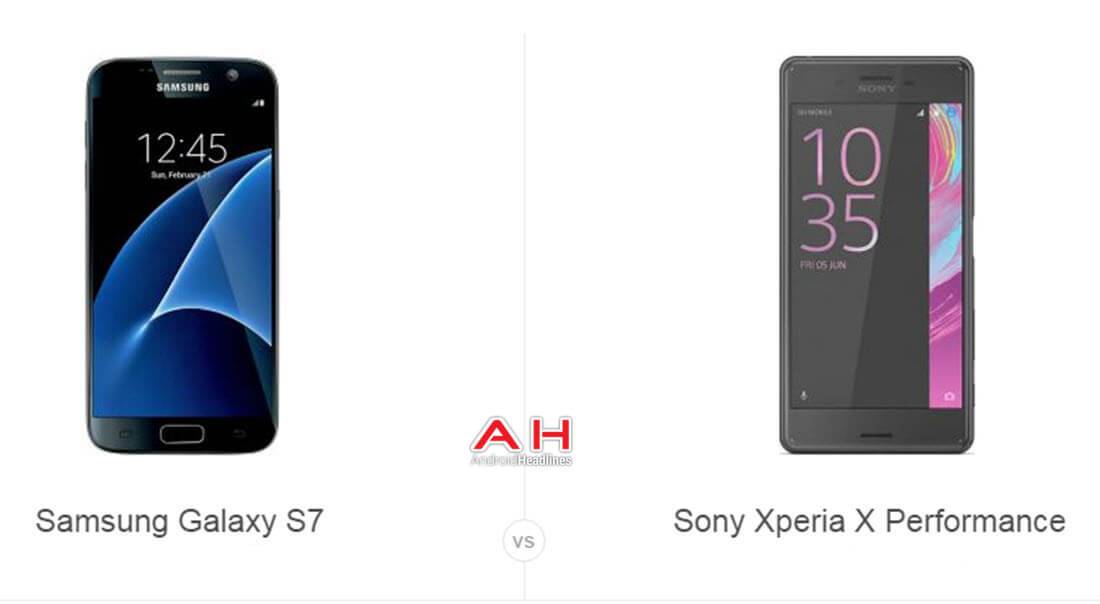 Do we have a good one for you today – the Samsung Galaxy S7 goes up against the ‘new’ Sony Xperia X Performance. The metal and glass Galaxy S7 battles it out with the new, all-metal Xperia X Performance. When it comes to the looks department – a subjective matter – the nod would go to the Galaxy S7 with its sculpted metal sides and solid feeling glass back. The Xperia X Performance uses a metal backing that looks and feels very much like plastic, taking away that premium feel. There is no mistaking which smartphone is the Samsung and which is the Sony – they retain their basic shape. The Sony still has large top and bottom bezels with that rectangle look, although the edges were round to be more comfortable. The devices do share many of the same internal parts or specs, but the overall feel of the devices are different. We will look at those similarities now, and then later we will look at each device to try to determine a winner of this specification comparison.

The Samsung Galaxy S7 is a refinement of last year’s complete makeover, making a rather unassuming introduction – it has the same metal and glass construction – refined just a little to make it easier to pick up off a flat surface. Inside you will find all of the latest and greatest components – some the same as in the Sony. The real news this year was the new and improved camera area that went from a standard 16MP shooter to a Dual Pixel 12MP shooter. Nobody saw that one coming and were upset over it (bigger is better, you know,) but it is a combination that works just fine.

We were expecting a 21MP shooter, according to the rumors flying around. However, Samsung surprised us all by using a new Dual Pixel 12MP camera that has a larger sensor than the old 16MP. Samsung claims the new sensor with larger pixels, allows more light and detail onto the sensor for better low-light shots. Samsung made other improvements by increasing the aperture to f/1.7, included a new, faster phase detection autofocus (PDAF), auto HDR and they retained the OIS. The Galaxy S7’s FFC comes with a 5MP sensor, a wide-angle lens, the same f/1.7 aperture as the primary camera, and Live HDR, which allows excellent low-light selfies and video chatting. The non-removable battery increased to 3000mAh and features Quick Charge 2.0 and Quick Wireless Charging for both Qi and PMA standards.

The Galaxy S7 does have a few things that the Sony Xperia X Performance is lacking. The Galaxy S7 has a heart rate monitor and oxygen saturation sensor. The Galaxy S7 also offers quick wireless charging. The Galaxy S7 has both Android Pay as well as Samsung Pay to make mobile purchases just about anywhere you can swipe a credit or debit card. It also has a fingerprint sensor for unlocking the device and authorizing mobile payments. The Galaxy S7 measures 142.4 x 69.9 x 7.9 mm, weighs in at 152 grams and is available in Black, White, Gold, and Silver and costs about $670.

The new Sony Xperia X Performance is at first glance your typical Sony smartphone – a rectangle, large top and bottom bezels, a decent camera, and an FHD display – and at second glance, you realize it is the same thing. This year they went from a metal and glass design to an all-metal design, but even the metal they used looks and feels like plastic. In typical Sony fashion, they put out a US model with no fingerprint scanner and an international model with a fingerprint sensor. Where is the sense to all of this?

The Xperia X sports their ever-loving 5.0-inch IPS LCD FHD display with a resolution of 1920 x 1080 pixels, and 441 PPI. Sony wisely went with the 64-bit Snapdragon 820 quad-core processor with dual cores clocked at 1.6GHz and a dual-core clocked at 2.15GHz. It is packing 3GB of DDR4 RAM and an excellent Adreno 530 GPU to handle the graphics. The Xperia X Performance comes with 32GB of internal memory, which is expandable to 200GB via a microSD card.

The Performance uses Sony’s 23MP camera sensor for its primary shooter, with an aperture of f/2.0, 24mm, Phase Detection Autofocus (PDAF,) and LED flash. In the FFC area, Sony did jump from a 5.1MP to a larger 13MP, giving it an aperture of f/2.0 and 22mm lens for excellent selfies and video chats. A 2700mAh non-removable battery with Quick Charge 2.0 capabilities supplies the power.

The Sony Xperia X Performance retains the dual stereo front-facing speakers. There is no fingerprint sensor in the US version, but the international version should work on limited US networks – check with your carrier. The Xperia X measures 143.7 x 70.4 x 8.7mm and weighs in at 164.4 grams. The colors Sony is advertising are White, Graphite Black, Lime Gold, and Rose Gold and the Xperia X will cost you about $675 – $700.

The Xperia X Performance does have dual front-facing stereo speakers and matches the Galaxy S7’s IP68 rating, but still pushes a 1080p display on us. To top it all, the US version does not even have a fingerprint sensor – what is Sony thinking?

The are many diehard Sony fans that continue to support Sony and will buy nothing but a Sony product. Why they continue to accept a mediocre product, pay top dollar, and call it the best is beyond me. In my mind, the Samsung Galaxy S7 wins easily in this competition.