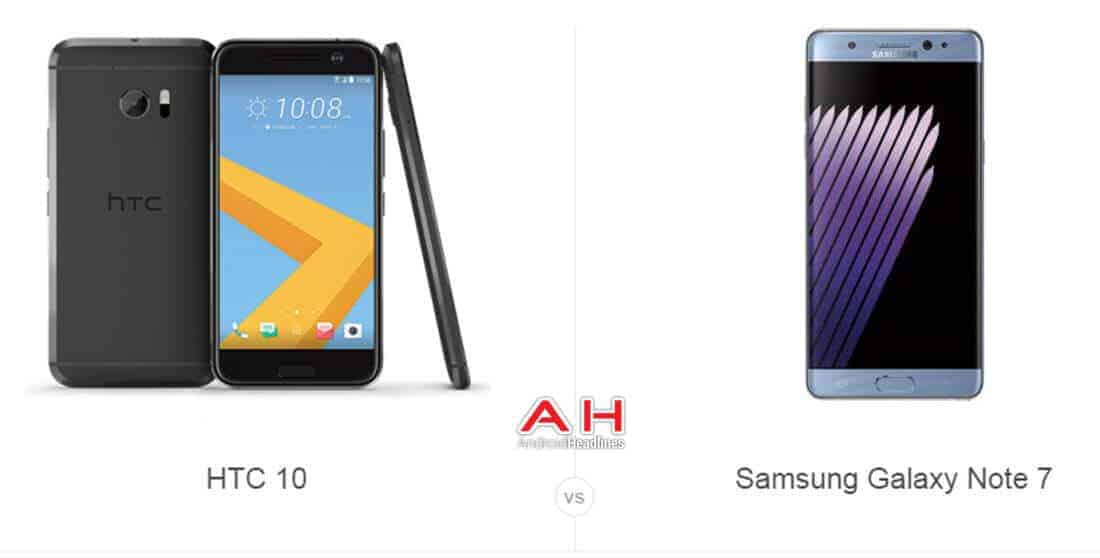 Do we have a good one for you today – the HTC 10 takes on the new Samsung Galaxy Note 7. Here we have two devices that couldn’t look more different – the HTC 10 is chiseled out of a piece of metal with chamfered edges while the Galaxy Note 7 uses a metal chassis and frame with Gorilla Glass 5 on the front and the back…the first smartphone to do so. This is the first year that the Note series take on the dual curved edges – not quite the curve of the S7 Edge, but pretty darn close. The design of the Note 7 really takes on a new, more sophisticated look with its design. The HTC 10’s new design spruces up an older design that was starting to get a bit stale and it looks great, although comparing both devices side-by-side, the Galaxy Note 7 will take the prize in the looks department, both win with a solid build. Despite their differences, they do have many things in common that we will go over in the next paragraph before we move on to the detailed specifications.

The HTC 10 and Galaxy Note 7 do have several things in common. We can start with physical size – except for being slightly taller by about 8mm, the devices are relatively close in size and the larger Note 7 is only 8 grams heavier. The displays come in at 5.2-inches vs. 5.7-inches and both use the QHD display resolution, but use a different display technology. Both devices use the same Snapdragon 820 processor, 4GB of DDR4 RAM, and both have a 64GB variant, and both allow for memory expansion via a microSD card. Both use the Adreno 530 GPU for outstanding graphics. The camera areas on the HTC 10 and Note 7 are also very similar as they both use a 12MP (larger pixels) for the primary cameras, and they both use a 5MP sensor for their front-facing camera (FFC), and both take great photos. Both devices incorporate Hi-Res audio for earphone listening. Both have non-removable batteries with rapid charge capabilities, and both have a fingerprint sensor. The usual suspects are there – Wi-Fi, Bluetooth v4.2, GPS, NFC, and both use the new reversible Type-C USB connector for charging and data transfer.

HTC made a name for itself with the all-metal HTC One M7 and it was the darling of smartphone users that valued a metal-bodied phone. However, each year HTC came out with the same basic design, kept tweaking their camera area, and avoided a QHD display, and consumers were getting a little bored. With the HTC 10, they redeemed themselves as it is the best smartphone they have made to date. New and fresh design, high-end specs, QHD display, great sound, great camera – it has it all. How well does it stack up to the new Samsung Galaxy Note 7? Let’s take a look.

The HTC 10 sports a 5.2-inch Super LCD5 QHD display with a resolution of 2560 x 1440 pixels and 565 pixels-per-inch (PPI.) HTC grabbed the best processor they could – the Qualcomm 64-bit Snapdragon 820 quad-core with dual cores clocked at 1.6 GHz and dual cores clocked at 2.15 GHz and for graphics they added an Adreno 530 GPU. The HTC 10 packs 4GB of the faster DDR4 RAM and 32GB of internal memory that is expandable to 256GB via a microSD card.

The camera area is another aspect that HTC kept experimenting with over the years, but they could never keep up with the competition. The HTC 10 finally has all of the right pieces – a 12MP sensor with its UltraPixel 2 for capturing more light and image for better low light pictures. HTC added laser autofocus, a dual-tone LED flash, a large aperture of f/1.8 and OIS. While the FFC uses a 5MP sensor, with a large f/1.8 aperture, a wide-angle lens, OIS, and even included an on-screen flash to ensure excellent low-light selfies and video chatting. A 3,000 mAh non-removable battery powers the device and it uses Qualcomm’s Quick Charge 3.0, which will give you up to a 50-percent charge in only 30 minutes.

Rather than placing the fingerprint sensor on the back of the device, HTC decided to put it right where the speaker for BoomSound used to sit, so they placed the ‘low-end’ speaker on the bottom of the device, and the high-end sounds now originate from the earpiece. HTC did rename their favorite to BoomSound Hi-Fi, to show the distinction. HTC also included Hi-Fi circuitry for great sounding music for your earphones. The HTC 10 measures 145.9 x 71.9 x 9 mm and weighs in at 161 grams. It comes in Carbon Grey, Topaz Gold, and Glacier Silver and it will cost you about $650 with 32GB of memory. 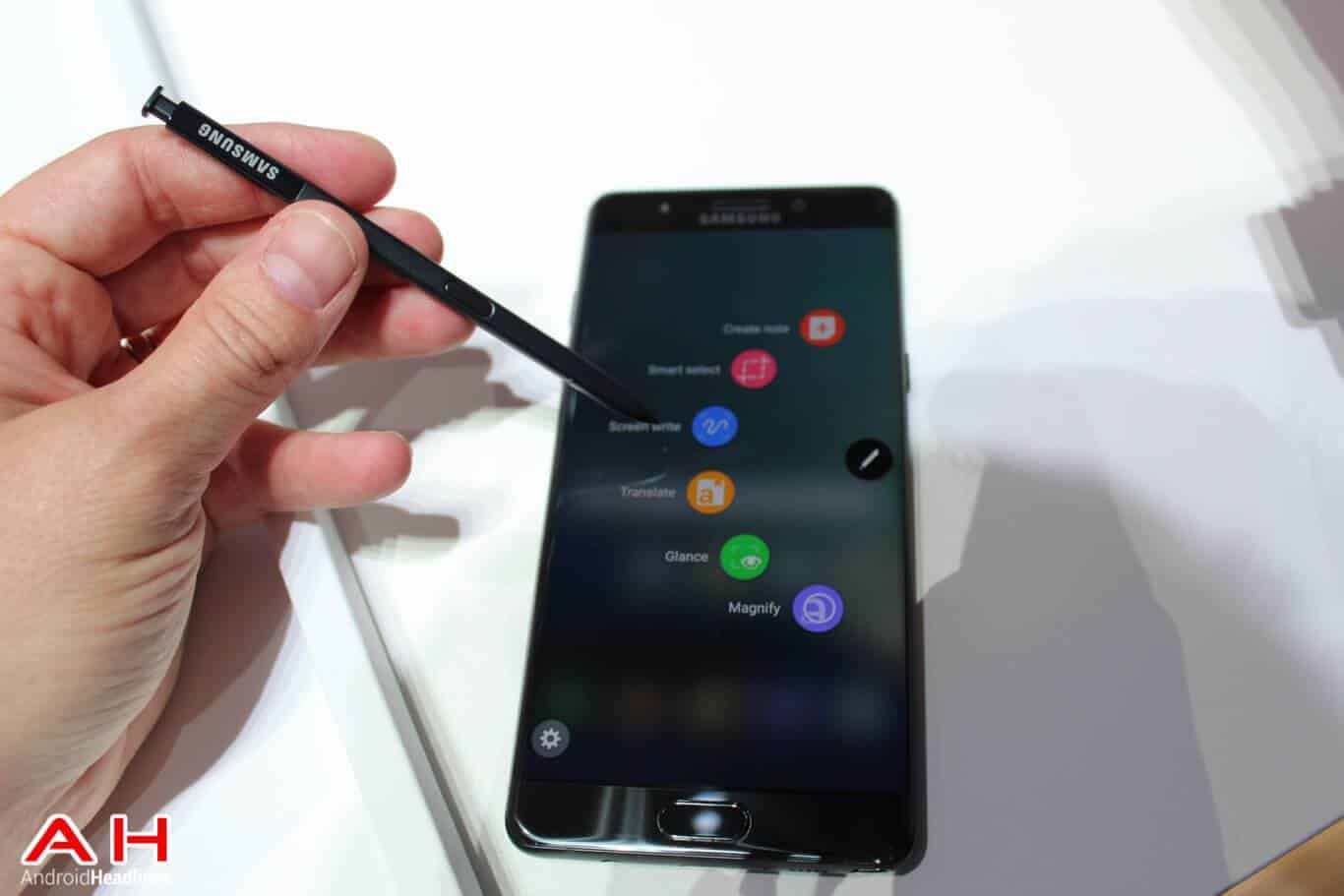 The new Samsung Galaxy Note 7 finally gets its dual curved screen in the form of Gorilla Glass 5 but not quite as pronounced as the S7 Edge. The new display certainly gives the Note 7 a more elegant and polished look. The S-Pen and its accompanying software are what separate the Note series from the other phablets. Teaming up with Wacom years ago has allowed Samsung to create a unique writing experience that gets better every year and even waterproof this year. If you are wondering if the S-Pen can be put in backwards this year, the answer would be ‘no’.

The Galaxy Note 7 sports a 5.7-inch Super AMOLED QHD display with the addition the dual curved edge, giving it a resolution of 2560 x 1440 pixels and 518 PPI. If you purchase your Galaxy Note 7 in the US/Canada, it will pack a Snapdragon 820 quad-core processor with four cores clocked at 1.6 GHz and the other four cores clocked at 2.3 GHz. In other countries, it will sport an Exynos octa-core with a quad-core clocked at 1.6 GHz and a quad-core clocked at 2.3 GHz. The Note 7 packs 4GB of DDR4 RAM and 64GB of the faster UFS 2.0 internal memory and brings back expansion via a microSD.

The primary camera on the Galaxy Note 7 is the same one used on the Galaxy S7/S7 Edge. It uses a Dual Pixel 12MP sensor with an aperture to f/1.7, including faster phase detection autofocus (PDAF), auto HDR, and Smart OIS. For its FFC, it uses a 5MP wide-angle lens with a large f/1.7 aperture and Live HDR. The Note 7 has a large non-removable 3,500 mAh battery but also features rapid charge features as well as quick wireless charging capabilities.

Samsung reworked some items and added a few new ones to the Note 7. The S Pen has many new added features giving it more, functionality, and sensitivity – it is even waterproof and will not go in backwards this year. It still has the obligatory heart rate monitor and oxygen saturation sensor, as well as Samsung Pay, and built-in wireless quick charging. Samsung included the newer USB Type-C reversible connector for charging and data transfer. Samsung made the move this year and added a new Iris Scanner for more security that allows you to unlock your Galaxy Note 7 by looking into the top area of the display. There are plans to upgrade the software shortly to have the scanner authorize mobile payments. Depending where you buy the Galaxy Note 7, it will come in Blue Coral, Silver Titanium, Black Onyx, and Gold. It measures 153.5 x 73.9 x 7.9 mm, weighs in at 169 grams, and will cost you about $865.

Okay, this one could have gone either way, especially because of the price tags – the Galaxy Note 7 will cost you about $200 more. However, even though they both uses the same processor, GPU and the same amount of RAM, the Note 7 does offer a few more advantages. For one, you are getting 64GB as base memory – 32GB more than the HTC 10, although both can be expanded via a microSD card. The Note 7 also uses the Super AMOLED for better contrasts and offers the always-on display to save battery life.

The Note 7 also provides IP68 certification for water damage, a few extra niceties -Heart Monitor, Oxygen Saturation sensor, Samsung Pay that allows you to make mobile payments at almost all retailers that have the old card swipe, as well was having Knox security features and the new Iris Scanner for added security. It has a larger battery and fast wireless charging. And last, but certainly not lease, the Note 7 offers the S-Pen and all of its features and software.

The HTC 10 is a great device and will handle the needs for most people, but if you are an S-Pen user, and want the best, then the extra $200 makes the Galaxy Note 7 the choice for you.