OnePlus had introduced the OnePlus 3 smartphone back in June, and it seems like they really hit the target this time around. Initial reactions were great, and so were reviews. The OnePlus 3 is a high-end smartphone which ships with a whopping 6GB of RAM, and despite all that, it costs only $399 (slightly more in Europe). That being said, OnePlus was expected to introduce the second-gen OnePlus X as well this year, but the company’s CEO basically said that it won’t happen, he said that they intend to focus solely on OnePlus 3 this time around, which is why the OnePlus X (2016) won’t become a reality.

Having OnePlus’ statement in mind, we really did not expect to see another OnePlus-branded handset benchmarked anytime soon, but one such phone just surfaced. The OnePlus 3 Mini just surfaced on GFXBench, and thanks to that listing, we know the expected specs of this device. The OnePlus 3 Mini will, according to this listing, sport a 4.6-inch fullHD (1920 x 1080) display, along with 6GB of RAM and 64GB of internal storage. The device will be fueled by the Snapdragon 820 64-bit quad-core SoC, and the Adreno 530 GPU will be in charge of graphics processing. The 16-megapixel shooter will be located on the back of this handset, and an 8-megapixel camera will be available up front. Android 6.0.1 Marshmallow will come pre-installed on the device, and on top of it you’ll be able to find OnePlus’ Oxygen OS UI.

That is more or less it as far as specs go, this handset seems to be identical to the OnePlus 3 as far as specs go, but its display is considerably smaller. Now, please do take this info with a grain of salt, OnePlus’ statement suggested that they have no intentions of releasing another smartphone this year, at least that’s what it seemed like based on their OnePlus X comments. Either way, if this leak is legit, then we will definitely see more info in the coming weeks, and the device will be certified by either FCC or TENAA at some point, so stay tuned, we’ll let you know if any additional info surfaces. 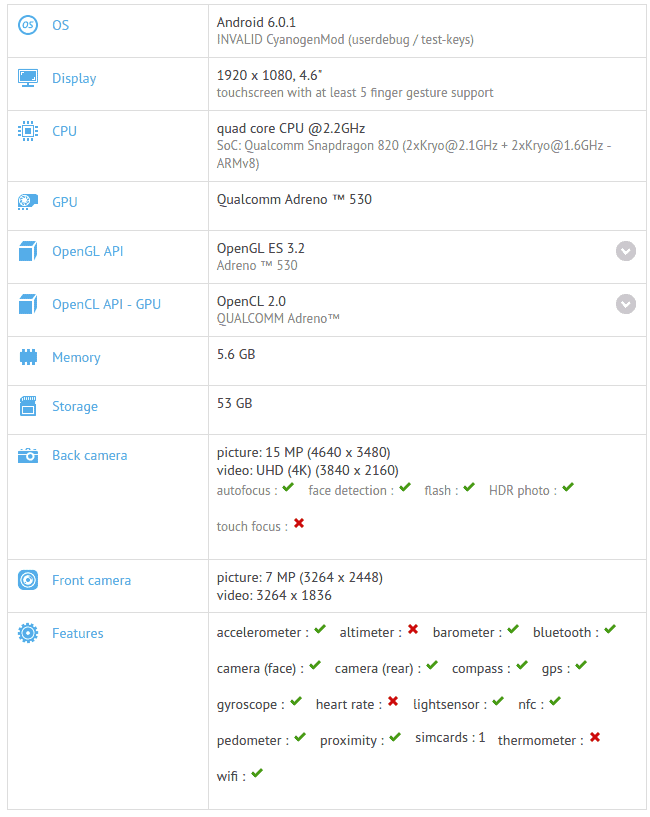