Skip to content
Advertisement
Trusted By Millions
Independent, Expert Android News You Can Trust, Since 2010
Publishing More Android Than Anyone Else
25
Today
25
This Week
470
This Month
470
This Year
118375
All Time
Advertisement

The Nexus 5X and Nexus 6P are Google’s current Nexus offerings. These two devices were introduced back in September last year, and Google is expected to release their successors next month. We’ve seeing tons of rumors and leaks regarding the Nexus ‘Sailfish’ and ‘Marlin’ handsets, which are Google’s alleged Nexus codenames for this year. According to rumors, the Nexus Sailfish will be the more affordable variant, while the Nexus Marlin is supposed to be Nexus 6P’s successor, and Google’s premium Nexus offering. Both of these devices are, allegedly, going to be manufactured by HTC, so it’s not that surprising we’re seeing HTC’s influence in their design, at least based on recent leaks.

The Nexus Sailfish had already surfaced on GFXBench about a week ago, and now the device popped up on AnTuTu. According to the listing, the device will sport a fullHD (1920 x 1080) display, and even though AnTuTu does not mention its size, you can expect to see a 5-inch panel, based on GFXBench listing. Qualcomm’s Snapdragon 820 64-bit quad-core SoC will fuel Google’s upcoming Nexus Sailfish handset, and the Adreno 530 GPU will be here for graphics processing. The device will ship with 4GB of RAM and 32GB of internal storage (based on GFXBench). While you can expect to see a 13-megapixel camera on the phone’s back. It is actually possible that Google will include the same 12.3-megapixel sensor we’ve seen utilized in the Nexus 5X and Nexus 6P, but we’re only guessing at this point. The 8-megapixel shooter will be placed on the phone’s front side, and that’s pretty much everything AnTuTu had to share.

In addition to all this, we also know that the phone will ship with the latest version of Android, and will, next to the Nexus Marlin, be the first smartphone to come with Android 7.0 Nougat. Based on leaks, we can expect to see a rather industrial-looking smartphone, with a rear-facing fingerprint scanner. Google’s upcoming smartphones will be rather sleek-looking though, if leaks are to be believed, though we’ll know more once Google opts to introduce these two phones, stay tuned, we’ll keep you posted, as always. 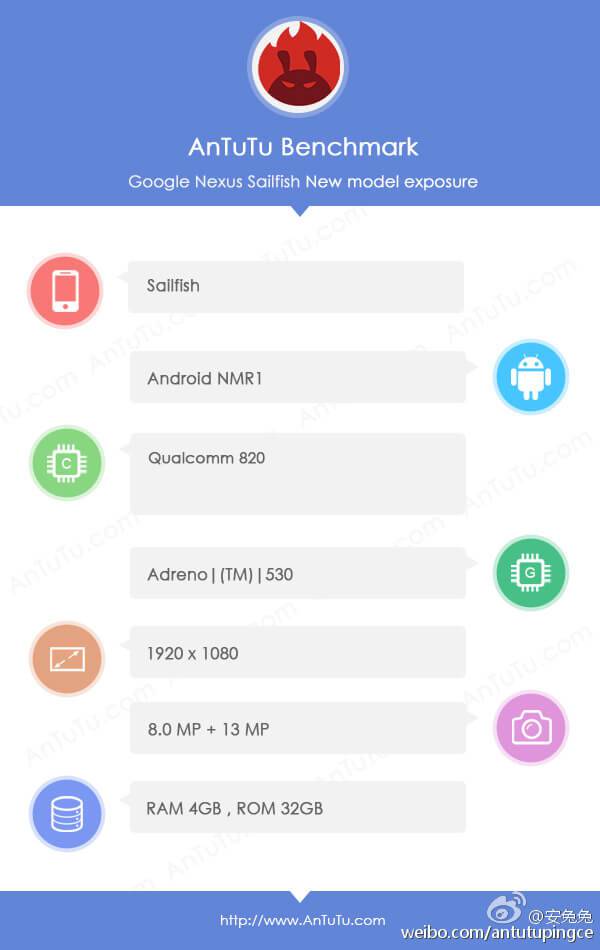