Yesterday some interesting news came through. While most of the news over the past few days and weeks has surrounded the launch of the Samsung Galaxy Note 7, this news snippet was in regards to the Nexus range for 2016. The report which came from Android Police looked to detail that the upcoming Nexus devices would come with a different launcher experience to what most Android devices owners are accustomed to. The new launcher which is currently being dubbed the ‘Nexus Launcher’ comes with some notable changes to the likes of the Google Now Launcher, with the most obvious being what seems to be the absence of the app drawer. Although, in reality, this is just the absence of the visual traits of the app drawer, as it is still present but just hidden from view. Either way, the idea that the powers-that-be were changing the stock Android experience was rather big news, with many debating whether the new look was a good look.

Now, Android Police has released some more details on this, which look to clarify any confusion over the introduction of the Nexus launcher. The crux of the new information is that the Nexus Launcher is not replacing the Google Now Launcher. Or more accurately, is not replacing the Google Now Launcher anytime soon. Instead, and according to details, both launchers will likely coexist on the Nexus devices (if the new launcher is indeed included on the new Nexus devices). The information suggests that both will be available to the new Nexus device owners and will be able to be selected through the launcher settings.

While this does raise some questions as to what is the point of having two stock launcher experiences, it is suggested that the Nexus Launcher could be one which is aimed towards the forward-thinking elements Google is working on. For instance, yesterday’s news did focus on the Google Assistant integration which will likely come as part of the Nexus Launcher experience and it could be the case that devices which are better optimized to make use of Google Assistant will be better tuned to work with the new (Nexus) launcher, while other less optimized devices could still make use of the Google Now Launcher. Alternatively, this could be a sign of a new launcher which is specially aimed for an even more Nexus-like experience with Google Now Launcher becoming more of a default for non-Nexus devices. Or of course, the Nexus launcher is either just being tested or will indeed replace Google Now Launcher… at some point. Just not yet it would seem. 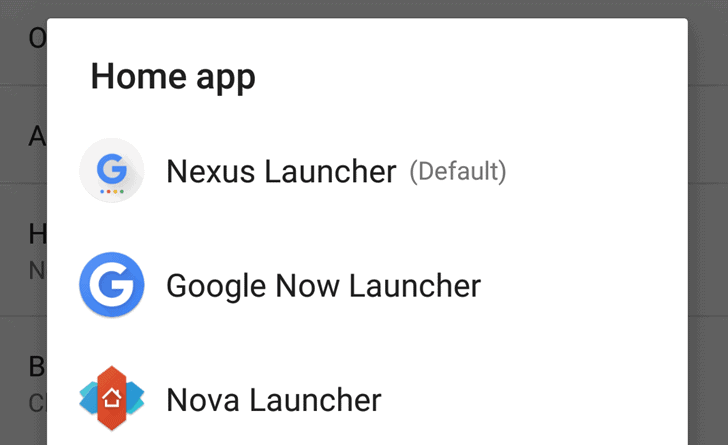