The Meizu M3E smartphone landed a couple of days ago. This is the company’s all new mid-range offering, which is quite affordable, just like pretty much every other Meizu-branded device. That being said, Meizu had introduced quite a few devices this year, including their PRO 6 flagship which was announced back in April. Now, we’ve seen tons of rumors this year stating that Meizu might announce yet another flagship, a device which is fueled by Samsung’s Exynos 8890 64-bit octa-core SoC, and which actually sports a curved display on both its sides, similar to the Galaxy S7 Edge and the Galaxy Note 7. The company’s execs also hinted that this device might land at some point this year, and the newest leak more or less confirms it, read on.

The ‘meizu_m96’ surfaced on AnTuTu it seems, and chances are that this device will be called the Meizu PRO 7, or something similar. The Meizu PRO 5, which was announced in September last year, was actually fueled by the Exynos 7420 SoC, Samsung’s flagship processor for last year. So, it is possible this handset will be called the Meizu PRO 7, PRO 7 Edge, or something of the sort. Anyhow, according to AnTuTu, the device will feature a QHD (2560 x 1440) display, and if that’s true, then this will be the first Meizu-branded smartphone to ship with such a panel. Anyhow, the listing also reveals that the phone will ship with 4GB of RAM (though a 6GB RAM variant is also a possibility) and 32GB of internal storage. The 12-megapixel camera will be placed on the back of this smartphone it seems, while a 5-megapixel shooter could be available up front.

That is more or less it as far as AnTuTu’s listing goes, but according to previous rumors and Meizu’s lineup in general, we also believe that the device will be made out of metal. The Meizu PRO 7 (or whatever Meizu opts to call it) will also sport the company’s mBack multifuncional physical home key below the display, and that key will double as a fingerprint scanner. The device will almost certainly going to ship with the company’s mCharge fast charging solution as well. 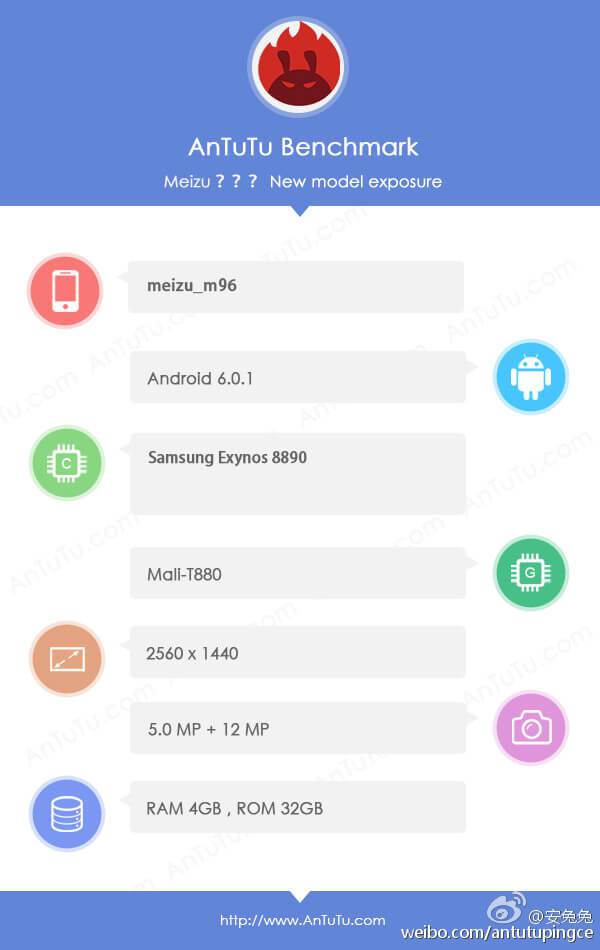