On one hand, rumors are pointing at a mid-range handset fueled by the Helio P10, and on the other hand they’re saying this might be Meizu’s new flagship with the curved display. Now, we actually believe that Meizu intends to introduce their new mid-range offering on August 10th, it seems a bit too early in the year to announce their new flagship. Anyhow, a new leak surfaced sharing the company’s allegedly upcoming smartphone, and if this leak is to believed, this might be the mid-range handset we’ve mentioned. The phone is made out of metal, and it looks quite sleek actually, but aside from the 2.5D curved glass that seems to be on top of its display, this doesn’t seem to be the company’s new premium offering. Now, in addition to this image, another leak surfaced saying that the phone will sport a 3,100mAh battery, and that the mCharge quick charging solution will be able to charge up the battery up to 90% in just 1 hour (18W charging power). Meizu’s mCharge tech actually adjusts the charge rate according to the temperature of the device, which makes it quite safe and fast at the same time.

So, if this rumor is to be believed, the mysterious handset with a curved display and the dual camera setup on the back will probably have to wait for a couple of more weeks / months, this seems to be the mid-range handset that leaked recently. The phone is expected to ship with the Helio P10 64-bit octa-core SoC, 3GB of RAM and Flyme 5.2.1 OS which is going to be installed on top of Google’s Android 6.0.1 Marshmallow OS. 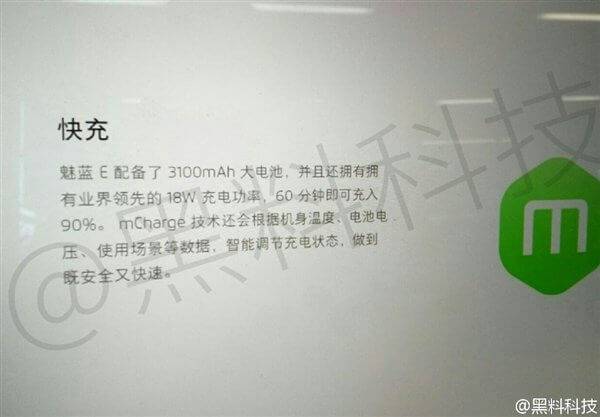