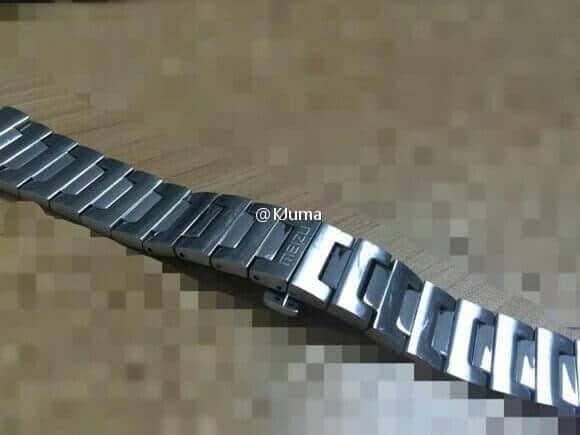 Meizu is one of the more interesting China-based smartphone manufacturers. This company has been growing at an amazing rate for the last couple of years, they’ve managed to sell 4.4 million smartphones in 2014, and that number grew to 20.5 million last year. Meizu manufactures and sells well-built and well-specced, and yet affordable smartphones which have managed to attract the attention of consumers based on the company’s sales numbers. That being said, Meizu had introduced a number of smartphones this year, but it seems like they’re might introduce a smartwatch as well really soon.

The company had released a rather suggestive teaser last month, and soon after that their alleged smartwatch actually leaked in a couple of real life images. Now, this, of course, does not confirm Meizu will actually introduce a smartwatch, but it sure indicates it might happen, especially considering yet another piece of the puzzle just surfaced. If you take a look at the provided image, you’ll get to see the company’s alleged watch strap. At first, this seems like a regular metal watch band, but if you look closer, you’ll notice the Meizu brand logo engraved into the band itself. Granted, this also does not confirm the watch is coming, but considering how many indications we’ve seen up to this point, the release of such a device seems quite likely.

Meizu has been manufacturing mp3 players way back when the company was founded, they shifted to smartphones later on, but during their existence the company released a number of mp3 players, quite a few smartphones, and even some headphones which were quite solid, Well, it seems like Meizu might expand their portfolio by releasing a smartwatch, and if the leaked images are any indication, that smartwatch might sport a rather interesting design. There seem to be three physical keys on the right side of the watch, and the watch itself is made out of metal. As far as form factor is concerned, we’re looking at a circular smartwatch here, and based on leaks, both leather and metal bands will be available for it. Latest rumor claimed that the watch might launch on August 10th, so stay tuned.