As reported fairly extensively in the online tech media, the global tablet market has been experiencing a steep downturn over the past few quarters. The second quarter of this year has been no exception to that trend either, with the global tablet market said to have shrunk for the sixth straight quarter if IDC’s latest report is anything to go by. According to the market research agency, global tablet shipments fell by as much as 12.3% YoY during the quarter, with 38.7 million devices shipped by vendors around the world. During the corresponding period last year as many as 44.1 million devices were shipped worldwide. Unlike the smartphone market, though, Apple continues to be the clear leader in this product category with its iPad models, while Samsung retains its number one position among Android vendors.

Taking a closer look at some of the numbers of individual vendors, Samsung’s overall shipments fell from 8 million units during Q2, 2015 to just 6 million units during the same period this year. That represents a significant loss of market share for the company; from 18.2% during the second quarter of last year to just 15.6% in the same three-month period this year. While Huawei managed to increase its market share from 2.9% to 5.6%, it was Amazon that did the star turn by increasing its sales from a negligible 100,000 units during Q2 2015, to 4 million units during Q2 2016, taking its market share from an insignificant 0.3% to a comparatively healthier-looking 4% overall. Much of the online retailer’s success can be attributed to attractively-priced devices like the $50 Fire Tablet that was launched by the company just ahead of the holiday season last year.

Meanwhile, much like in the world of smartphones, Android seems to be winning the battle of the operating systems in this sector as well, although, it is not nearly as dominant in this category. Unlike the smartphone sector where Android holds around 80% of the market globally, the open-source OS ‘only’ has a 65% market share in the world of tablets. Apple’s iOS comes in at number two with 26% of the global market, whereas Microsoft’s Windows is slowly emerging as a competitor with 9% of the market thanks to its ‘convertible’ devices that can also double up as regular notebook PCs when need be. 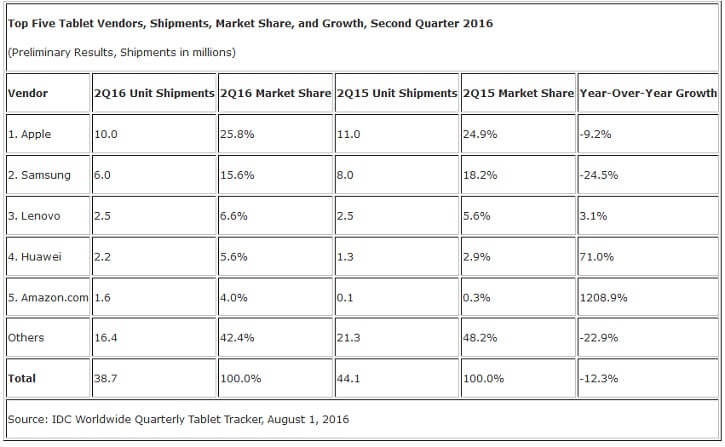