Skip to content
Advertisement
Trusted By Millions
Independent, Expert Android News You Can Trust, Since 2010
Publishing More Android Than Anyone Else
10
Today
49
This Week
501
This Month
2439
This Year
112518
All Time
Advertisement

We’ve seen a number of truly compelling flagship devices introduced this year, and the HTC 10 definitely belong in that group. HTC is not doing all that great as far as finances are concerned, but their new flagship is truly compelling. The HTC 10 is, much like many other flagships this year, fueled by the Snapdragon 820 64-bit quad-core SoC by Qualcomm. This device also comes with 4GB of RAM and 32GB / 64GB of internal storage, while it is made out of metal. The phone ships with Android 6.0.1 Marshmallow out of the box, and a 12-megapixel OIS camera is also a part of this package.

That being said, the HTC 10 Lifestyle crowdfunding campaign has been kicked off earlier this year, and the 500,000 Yuan goal was shattered rather quick in China. The HTC 10 Lifestyle will essentially be a budget variant of the HTC 10, even though this handset will look quite a bit different it seems. We’ve been waiting to hear more about this handset, and its pricing range had surfaced yesterday. If that rumor is to be believed, the HTC 10 Lifestyle will actually cost less than $200, and the rumor also said that it will be fueled by the Snapdragon 400 quad-core SoC, which actually managed to disappoint quite a few people. That being said, the device has just surfaced on AnTuTu, and thanks to that listing, we now know its specifications. The HTC 10 Lifestyle will, according to this listing, ship with a 720p (1280 x 720) display, though its size was not mentioned. The device will also pack in 2GB of RAM and 32GB of internal storage, while it will be fueled by the aforementioned Snapdragon 400 quad-core SoC, and the Adreno 305 GPU. The 13-megapixel shooter will be placed on the back of the HTC 10 Lifestyle, and a 5-megapixel camera will be available on its front side. Android 6.0.1 Marshmallow will come out of the box here, and on top of it, you’ll be able to find HTC’s Sense UI.

Now, as far as the phone’s design goes, if leaks are accurate, this smartphone will sport three capacitive buttons below its display. The fingerprint scanner will be placed on the back of the device, and all of its physical keys will be available on the device’s right-hand side. In any case, stay tuned, the HTC 10 Lifestyle is expected to launch soon. 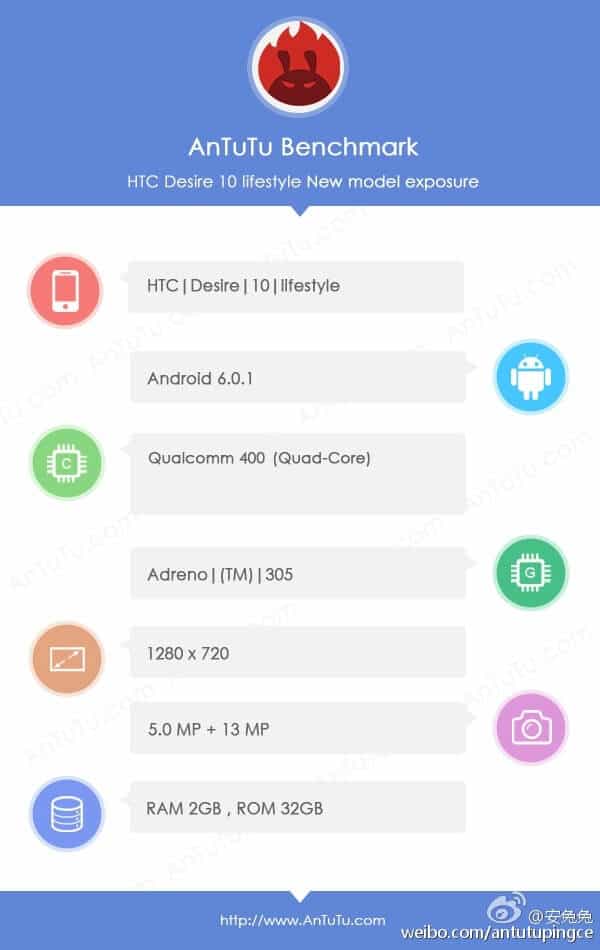