Huawei is currently the third-largest smartphone manufacturer in the world. This China-based company did great last year when they were able to ship out around 108 million smartphones, and it seems like their sales did not exactly slow down in 2016. Huawei, and its sub-brand Honor, are selling quite a few phones all around the world. That being said, Honor did introduce a rather huge phablet on August 1st, the Honor Note 8. This device actually comes with a 6.6-inch display, and people have been able to sign up for the flash sale ever since it was announced. Well, it seems like quite a few people decided to sign up, read on.

According to the official info coming from China, Honor has received 5.3 million reservations for the first flash sale of the Honor Note 8. Chinese brands tend to get quite a few reservations for particular devices, but Huawei probably did not expect such high reservation numbers for the Honor Note 8, mostly because this device comes with an almost tablet-like display, and is not exactly meant for everyone, but it seems like consumers really like what Honor announced on August 1st. Needless to say, Honor will not be able to make everyone who signed up happy, the company has limited number of Honor Note 8 devices to sell during the first flash sale, but considering these numbers, we’re sure the company is already doing their best to secure more Honor Note 8 devices in order to meet the demand, at least to some extent. The Honor Note 8 comes in three variants, all those variants come with 4GB of RAM, but they ship with different internal storage setups. The most affordable model of the Honor Note 8 comes with 32GB of storage, and costs 2,299 Yuan ($346) in China, while the 64GB storage variant comes around at 2,499 Yuan ($376). The most expensive Honor Note 8 handset ships with 128GB of internal storage and will set you back 2,799 Yuan ($420).

The Honor Note 8 is made out of metal, and it sports a 6.6-inch QHD (2560 x 1440) 2.5D curved display. The company’s Kirin 955 64-bit octa-core processor fuels this device, and a 13-megapixel OIS shooter is placed on its back. The 4,500mAh battery can be found on the inside, and Android 6.0 Marshmallow comes pre-installed here, along with Huawei’s Emotion UI. 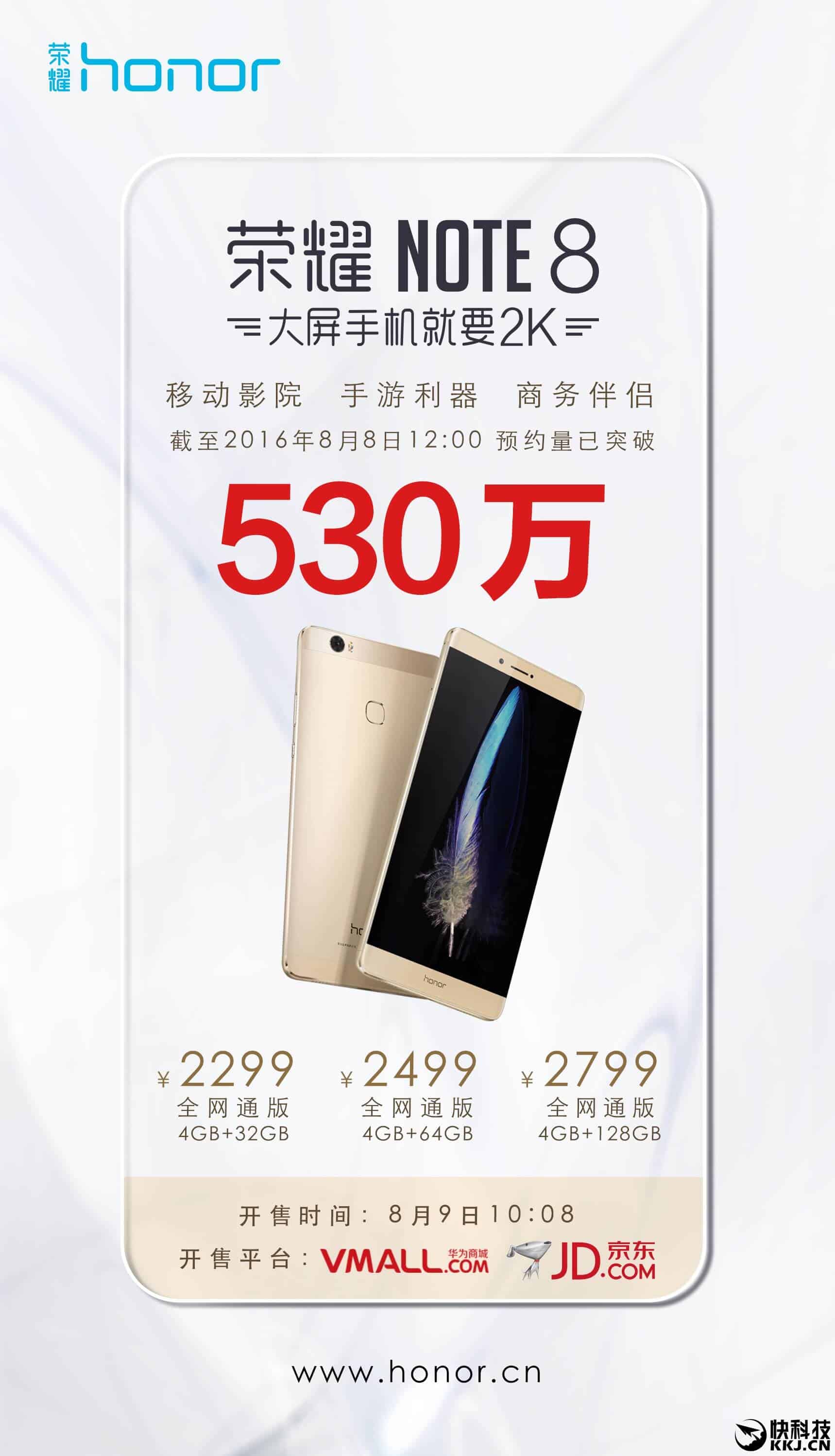