Meizu had recently introduced two new devices, the Meizu U10 and U20. These two smartphones are actually running Alibaba’s YunOS software, but Meizu had also unveiled a number of regular Android devices (with their Flyme UI on top) this year, including the Meizu M3 Note, Meizu PRO 6, Meizu MX6, etc. That being said, Meizu does not introduce phablets all that often, the Meizu PRO 5 was their last phablet, and that device was announced back in September last year as the company’s flagship. Well, the company is planning to introduce a new phablet soon, on September 5th, to be more accurate, and the device will be called the Meizu M3 Max it seems, read on.

About a week ago, several Meizu M3 Max teasers surfaced, though at the time we thought that the device will be launched carrying the ‘Meizu Max’ name. In any case, Meizu had also sent out invitations for the September 5th event a week ago, and now a new Meizu M3 Max leak surfaced. A leaked image from China says that the phone will be fueled by the Helio P20 64-bit octa-core processor, which is MediaTek’s 16nm SoC clocked at 2.3Ghz. In addition to the SoC info, this leak also reports that the phone will be available in both 32GB and 64GB storage flavors. The more affordable variant of the Meizu M3 Max is said to cost 1,799 Yuan ($269), while the more expensive model will set you back 1,999 Yuan ($299) should you choose to buy it. The 64GB storage model will, allegedly, come with the mPen stylus, and both variants of this smartphone will ship with Android 6.0.1 Marshmallow pre-installed, on top of which you’ll be able to find Meizu’s Flyme OS.

In addition to all this, we do expect this phablet to ship with a rather large display, and it seems like a 6-inch panel is the most probable outcome. The two variants of the Meizu M3 Max are probably going to ship with different RAM count, but we still don’t know whether to expect 2GB and 3GB RAM combination, or 3GB and 4GB RAM variants. In any case, the launch event is only a week away, and chances are we’ll stumble upon more info soon, stay tuned. 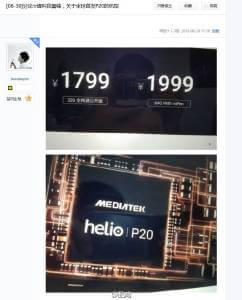