While Gmail has long been, and may always be, the premium email offering from Google, Inbox was launched back in 2014 to much acclaim, and has now become a mainstay for a lot of Android users. With the aim of making our inboxes as easy as possible to navigate, Inbox is developed by the same team as Gmail, and while it’s been updated over the past couple of years with a number of different features, it’s still not quite as feature rich as some would want it to be. Searching your inbox with Inbox is often nice and simple, but it’s only as good as Gmail’s search is, but this could be changing soon if new screenshots of an upcoming version are anything to go by.

Those that are already used to how Inbox works on Android will know the simple list of previous searches that the app currently serves up when starting a new search. In the below screen from an as-yet unreleased version of Inbox, it looks like a virtual assistant of sorts will be coming to Inbox. It shows off quick hits for businesses that you might have emailed in the recent past, as well as “refinements”, which basically appear to be ways of getting general information quickly. These might include highlight such as “Photos” or “Attachments” allowing you to see all your email that has some sort of content to it, without needing to know who it was that sent it to you.

The Google Assistant is set to launch before the end of the year, and while it might not end up making its way to every and all Android app from Google, it’s likely they’ll want to show off its new powers. Inbox also seems a perfect fit for this sort of functionality, as it has tried to make navigating our email as easy as possible from day one. Just when this new version of Inbox is to launch is anybody’s guess, and there’s a good chance that this is a server-side feature, which means that no new app update needs to take place. Either way, it looks like there are big things on the Horizon for Inbox, as well Android in general. 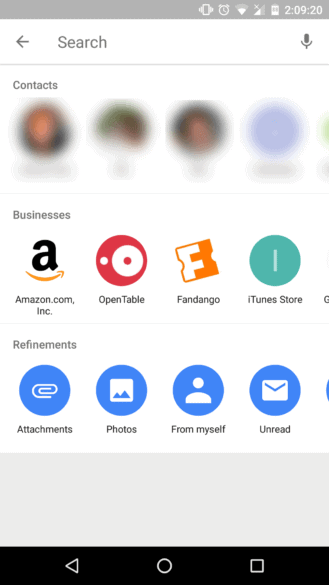