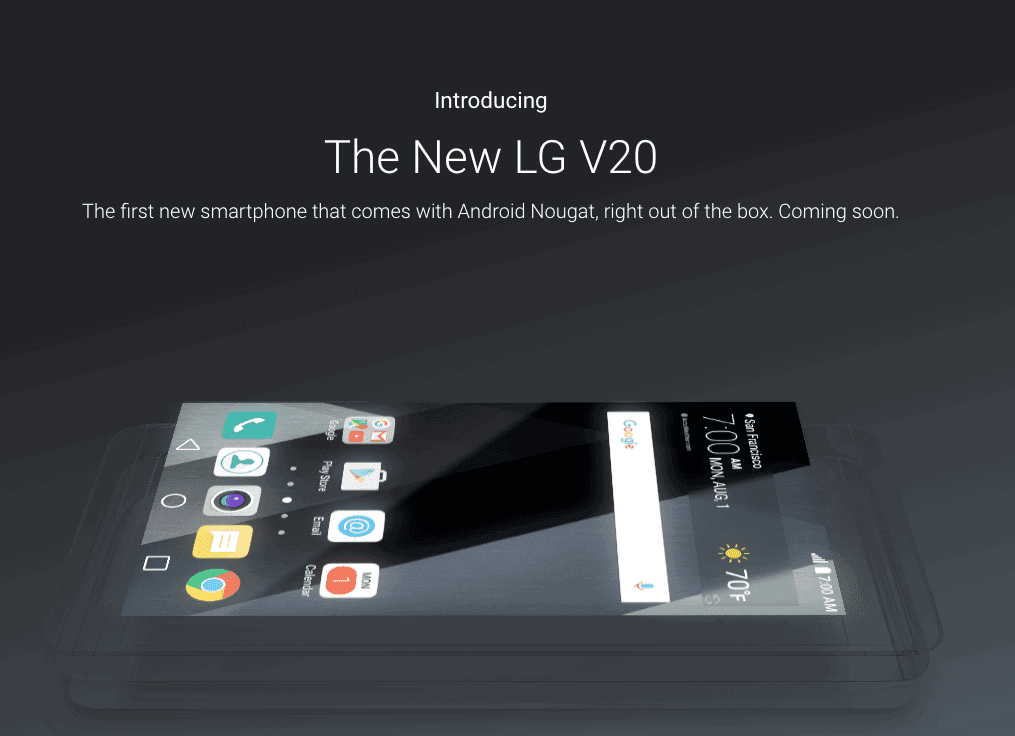 LG had already announced that their successor to the LG V10 – which was later confirmed by LG to be the LG V20 – would be the first one to see Android 7.0 Nougat. That means ahead of Nexus devices. Today, with the launch of Android 7.0 Nougat, Google confirmed what LG had already announced. At the bottom of their Android 7.0 Nougat webpage, they show the LG V20, albeit subtly. What we basically see here is an outline of a smartphone, with a screen placed above it. This doesn't tell us all that much about the upcoming device, that is due to be announced in San Francisco on September 6th. But you can see that LG's skin is largely unchanged here. That includes the lack of an app drawer (although that will probably be an option in the launcher).

As LG typically does, they have been slowly rolling out some of the features of the LG V20, touting how amazing the audio is going to be, and much more. We have a couple more weeks before the device becomes official, and it is expected that the LG V20 will use the "Friend" modules that were announced with the LG G5. Seeing as LG did note that those modules will be compatible with future flagship smartphones. So it's likely that this one will also have a removable bottom for the battery and other modules.

This whole thing with the LG V20 being first to run Android 7.0 Nougat, and Google promoting the device on their Nougat page, is a bit strange and out of the ordinary. Typically Google really only promotes its own Nexus and Pixel products, even in the Play Store with screenshots. Additionally, Nexus hardware usually launches with a new version of Android, to showcase the new software that Google has been hard at work on. However, as we can see today, it appears that Google is not announcing new Nexus hardware today. The rumor mill states that those are coming in October, that's the usual time for Nexus though. Android 7.0 Nougat is just a bit early. If you're looking to get a new smartphone and want some Nougat action, you'll have to wait for the LG V20 or the Nexus devices, whenever they launch.